The niceties of being nice.

The word “nice” has gotten a bad wrap.  Used as an adjective, we imply something is agreeable and pleasant in a very vague way.

It’s an unexciting word and I don’t know if I ever used it in a sentence with an exclamation point at the end.

But when you look at the origin of the word, as it was used in the late 13th century, it meant “not-knowing.” To be ignorant, careless, foolish, and stupid.  And so the evolution of the meaning of the word “nice” is quite extraordinary and kind of exciting.

Sometimes the very act of being nice to people has been an extraordinary act to witness.  These niceties are almost always reflexive responses which also could be interpreted as un-knowing.

On our recent trips, we have been astounded by what I like to call “the niceties of being nice.”  As a parent, it is these niceties that give me faith in humanity.

While I was wandering in and out of shops with my girls, Ever-Patient and #5 walked the cobblestones streets in this small beach town outside of Barcelona.  #5, who is a chronic nose-bleeder to begin with, had an epic nosebleed.  And of course, I am the one with all the tissues and wipes.  As Ever-Patient tended to our son with hand cupped under nose and the other pinching the bridge of it, several strangers stopped to offer help.  They frantically searched through their bags for tissue.  They stopped strollers in the middle of the path to dig out wipes from under the carriage.  An old crotchety looking man even dashed inside the nearest cafe to grab some napkins.  As more and more people passed by, more and more people stopped to offer help.

A nicety can be used to describe elegant and civilized features.  Although we saw what could be described as ultimate expressions of civilization through grandiose and unbelievable architecture on our trip, it’s always the small niceties, like the offering of a tissue, that give me hope for civilization in general.

I know this sounds like a stretch.  Some tissues given to a kid with a bleeding nose makes me believe that we can save ourselves from our own destruction?  Well, as a matter of fact, yes I believe this.

This past weekend I was at one of our favourite grocery stores.  I say favourite because everyone in this store, from management, to cashiers, to the flower lady, to the guys who take the carts in, are Nice.  Nice with a capital N.  Super-nice.  They have made my grocery shopping one of the most pleasant experiences in my life.  We were checking out on Sunday and Lorraine, a cashier we have known for almost nine years now, said hello to all my children by name.  By name!  She looked them in the eye and called them by their names.  At the deli, one of my children was waiting to order her favourite salami but customers kept ordering in front of her.  I was watching from afar and starting to make my way across to help her when the manager beat me to it.  He saw what was happening, talked to my daughter, and went behind the counter and pointed this out to the deli person in nice way of course. My daughter later told me that the deli person apologized for not seeing her sooner. 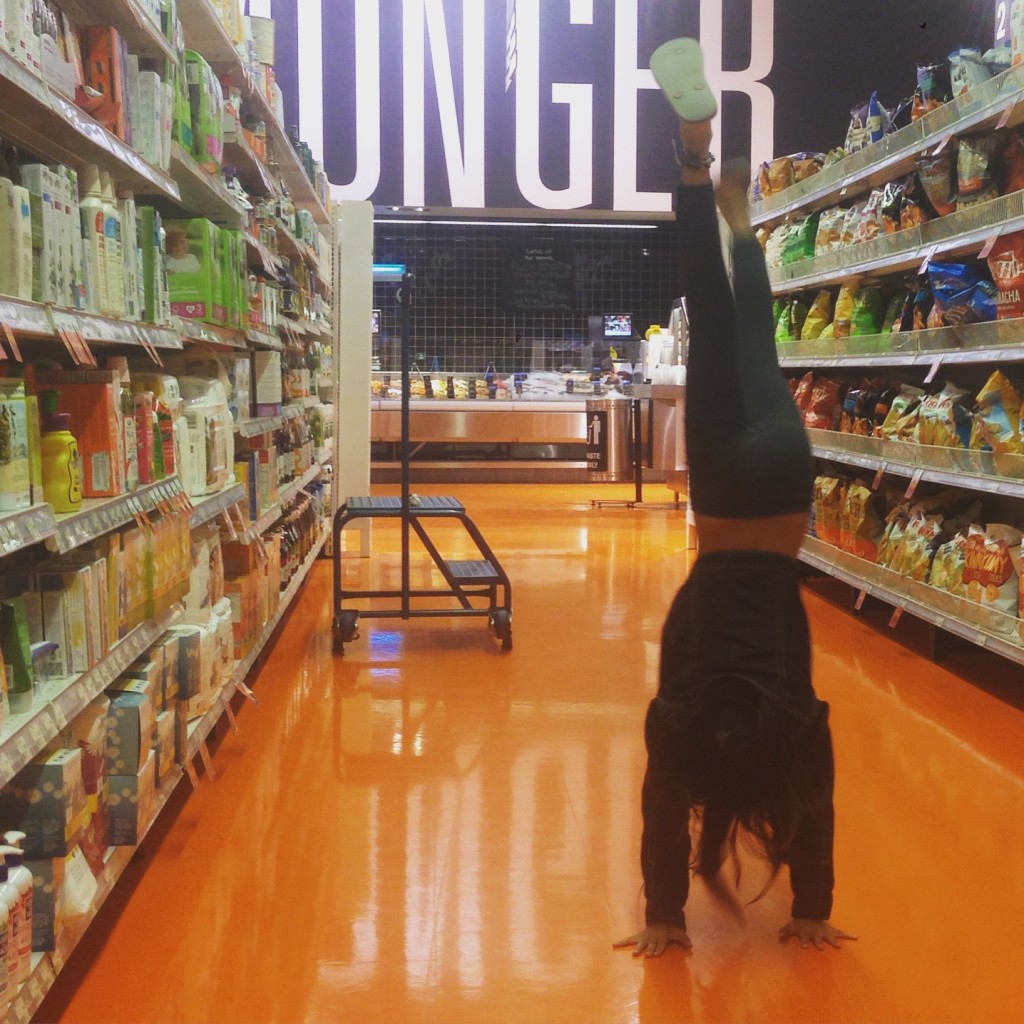 Now take the word “kind.”  The origin of this word meant “natural, innate, and native” and evolved to meaning “benign and compassionate.”  Why the evolution?  Maybe being compassionate used to be natural or is assumed should be innate in human beings.

We talk about random acts of kindness.  But what if it’s not random.  What if we are naturally born to be kind and these acts aren’t random but are deeds that align with who really are?  That gives me hope.

Being nice doesn’t have to be generic and boring and it doesn’t have to mean you are a pushover or weak.  It’s unfortunately sometimes a rare thing to notice, the tiny nicety. But there are nice things being done all around you.  The first step is noticing.  I noticed my son ask his big sister if they could play double-decker horsey.  She had no idea what that meant and could’ve walked off but she didn’t.  She was nice about it.  And double-decker horsey is exactly what they played for awhile: 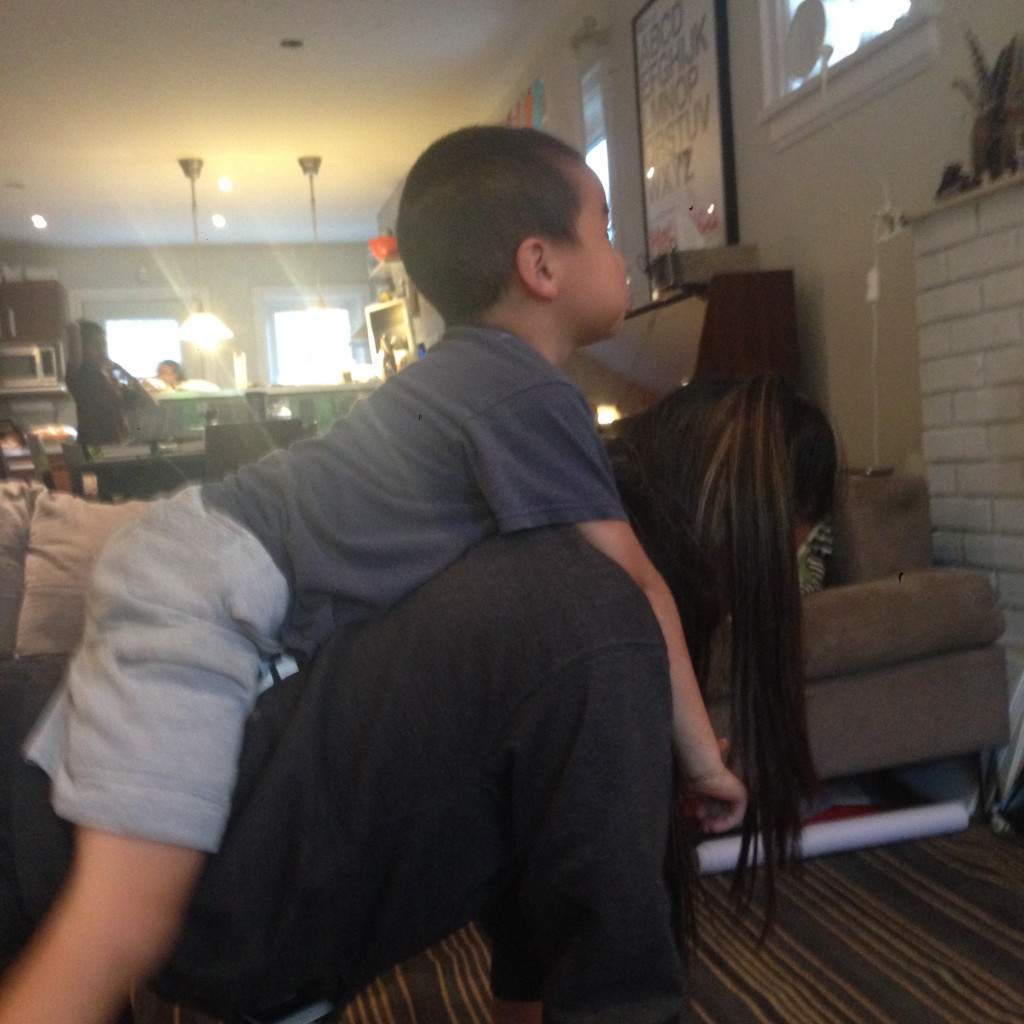 The second step is gratitude.  The third step is paying it forward because one kind act really begets another…hence the bucking bronco game I initiated.

And what if all these niceties multiplied exponentially?  What if we could all start to soften a bit just by being nice?  Could we start a nice revolution?  Maybe we feel helpless in changing the world and we fear the future of our children.  But maybe by making nice a more regular part of our day, we will soon see social media being bombarded with images like these ones.

But here is a place to start.

Be a little nicer today.  You can start at home and say nice things to the people around you.  Let that car merge in front of you and let it go if they don’t thank you for doing so.  Say good morning and ask how are you to the barista and really be interested in the answer.  Smile as you walk down the street.

And please be patient with that lady in front of you with five children clogging up the sidewalk.