My son loves to draw.

But I have to start with a story about how I teach art to my children and other people’s children, which includes a story about my son.

When we were in Barcelona, everyone brought sketchbooks.  If they saw something interesting, I wanted them to either draw it or write it down.  Some of my children prefer one more than the other and some like a balance of both.

My son, who loves to draw, can sometimes be intimidated by his big sisters’ drawings and be overwhelmed by his own ideas.  And for the beginning of the trip, he didn’t draw at all.

But then we went to the Picasso Museum and everything changed.

This is the next day.  Drawing in a plaza… 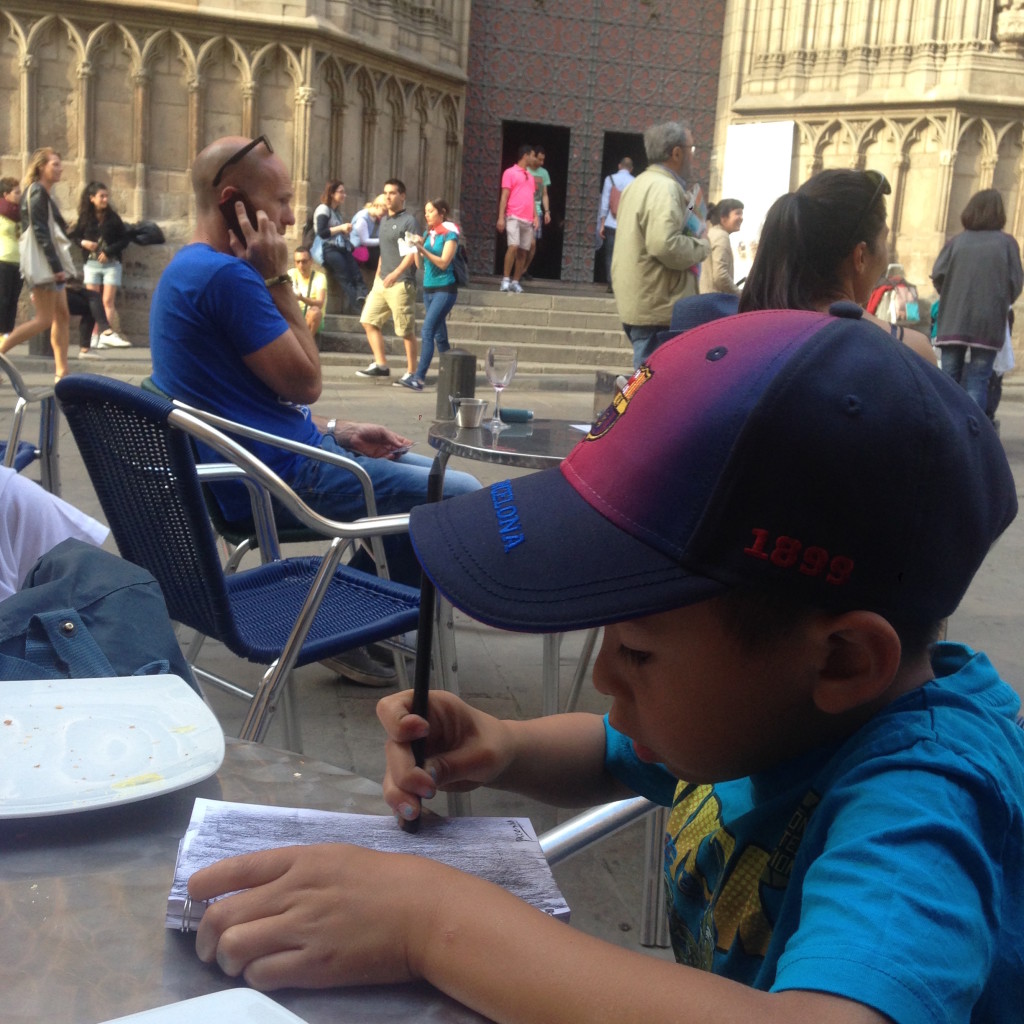 Let me just rewind and give a little background information.  I teach an art class to my kids and other people’s kids on a weekly basis.  It is a really great barter system which I may talk about at a later date.  But I have no formal arts training.  I do know these kids very well and I love to teach them. And I love art and it comes easier for me than most people.

Prior to Barcelona, we did a 4-week study on Picasso.  We explored his different periods and looked at his work online and in library books and we tried to recreate some of his work.  We always begin by copying.  And each child picks a different piece to copy or I hand out specific pieces based on where they are at developmentally so that there is no danger of getting caught up in comparing.

The kids copied and felt confident and started to add their own interpretations as the weeks went by.  Their original stuff evolved naturally after they spent a lot of time copying.

When we visited the Picasso museum, my son recognized some of the paintings from books and immediately started to copy some in his notebook.  He didn’t get caught up in all the details.  He was especially enamoured with the special exhibit Picasso|Dali exhibit.  The exhibit displayed some of Dali’s original works and put each painting beside the Picasso piece that Dali was copying.  They weren’t exactly alike but you knew that Dali had been directly inspired by the Picasso piece.  And sometimes it really looked like a direct copy.  The kids were thrilled at this discovery.

Eventually Dali developed his own style but he began by copying.

At home, more often than not, I am extolling the virtues of copying.  And now these great artists were proving my point.

In Steal Like an Artist: 10 Things Nobody Told You About Being Creative

by Austin Kleon, he writes about learning by copying:

We’re talking about practice here, not plagiarism – plagiarism is trying to pass someone else’s work off as your own.  Copying is about reverse-engineering. It’s like a mechanic taking apart a car to see how it works.

My brother was disappointed at the preliminary sketches being exhibited alongside finished products.  He said that it ruins the magic.  I disagreed.  My kids copied the sketches.  They saw that these artists weren’t mystically endowed at the last second by natural genius or even a divine muse to complete a final piece in one go.  It was a process.  A series of mistakes and trials.  It took practice.  By drawing both the sketch and the final piece, the kids were taking apart these works of art. 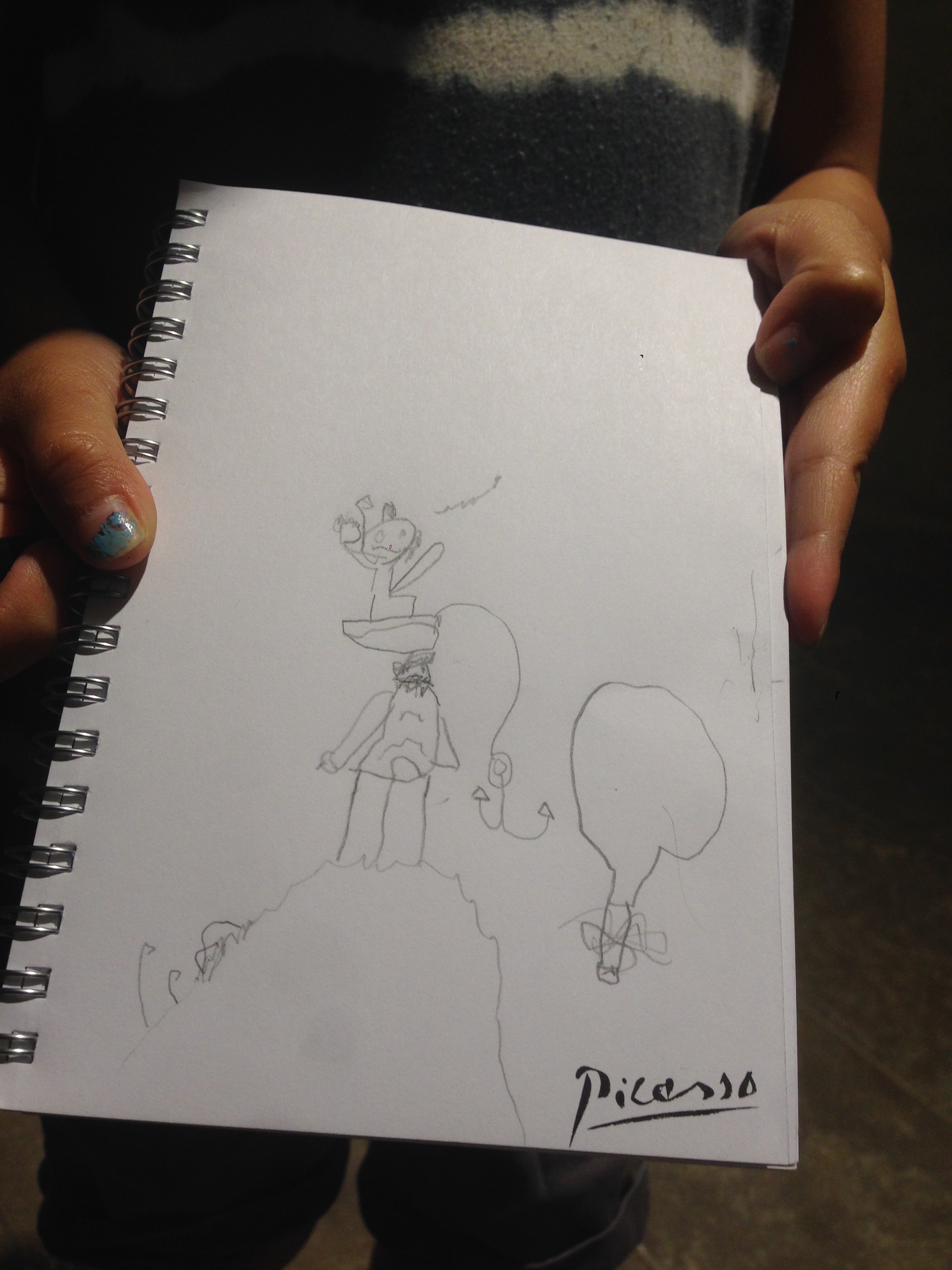 Copying frees you up.  You aren’t stuck on the blank page.  You can focus on the materials and drawing what you see.  If you are drawn to certain works of art, copy them.  If that’s daunting, research that artist’s early work – their sketches, their beginnings and work your way through them, mimicking his/her process.

After drawing for a few days, filling up his new Picasso notebook, #5 said, “Mama, I think I’m getting better. I don’t have to copy as much.”  And I said, “Yes. You’ve been practicing a lot and that’s all it is.  Practice.”

What a good artist understands is that nothing comes from nowhere.  All creative work builds on what came before.  Nothing is completely original…If we’re free from the burden of trying to be completely original, we can stop trying to make something out of nothing, and we can embrace influence instead of running away from it.

Whether it’s drawing or parenting or living, and you feel like you are stuck or you are overwhelmed with choices but you’d like to begin somewhere, then copy someone who is doing something that you’d like to be doing.  The more you copy, the faster you will find your own way.  Give credit when it’s due but remember it’s practice.  But you are taking a step forward.  You aren’t paralyzed by indecision or the pressure of being completely original.

Kleon quotes Dali himself who said, “Those who do not want to imitate anything, produce nothing.”

And that’s really all it takes to begin any journey.