In an earlier post, I had talked about listening carefully, prompted by one of the points from Bruce Mau’s Incomplete Design Manifesto:

32. Listen carefully. Every collaborator who enters our orbit brings with him or her a world more strange and complex than any we could ever hope to imagine. By listening to the details and the subtlety of their needs, desires, or ambitions, we fold their world onto our own. Neither party will ever be the same.

I mentioned how I wasn’t getting enough sleep because of all the noises.  It sounded like animals were just outside my door, especially Ricky/Mateo the Rooster.  I am used to the quiet white noise of the central heat being pumped through vents while all windows are closed shut.  But being a light sleeper and all, I still wake with a jolt in the middle of the night to little feet running to the bathroom or a cough or two from down the hall.

In Costa Rica, I wasn’t sleeping well.  Every time I woke up in the middle of the night, I wished and I prayed to just go back to sleep, for my sensitive hearing to just dull enough so I could drift back into La-La-Land.

Well…be careful what you wish for.

After about a week, I was in the water with the kids jumping through the waves when…uh-oh…

Ever-Patient happened to catch me trying to unclog it right after it happened: 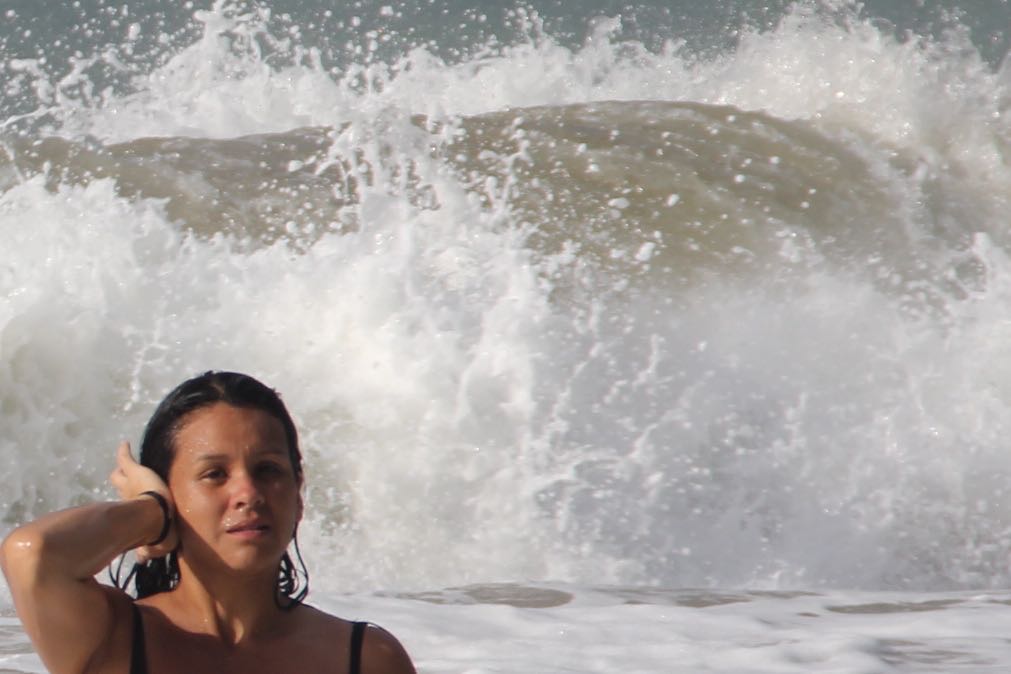 As you can see from the picture below, I didn’t think much about it.  I continued to frolic with my children in the waves, tackling my eldest whenever possible… 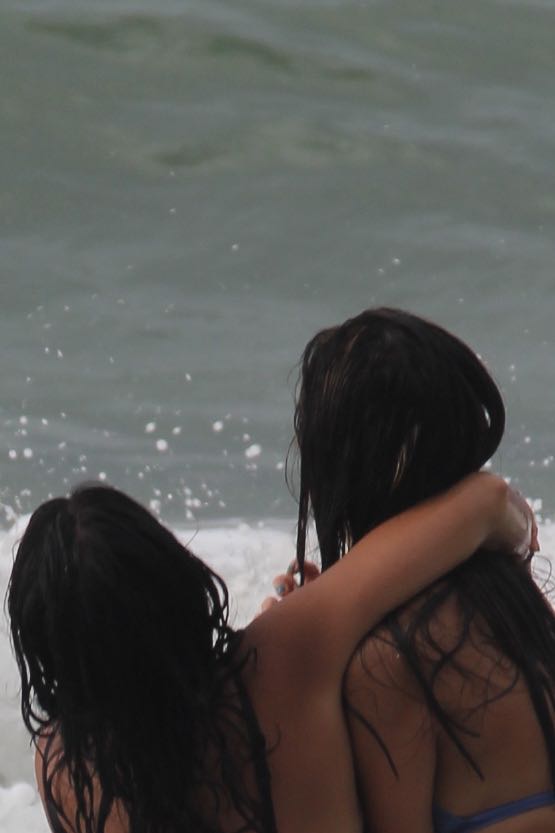 As the day wore on, and the ear hadn’t magically cleared up on its own, I started to worry just a little.

Here’s my worried face as the sun began to set and life became a little quieter: 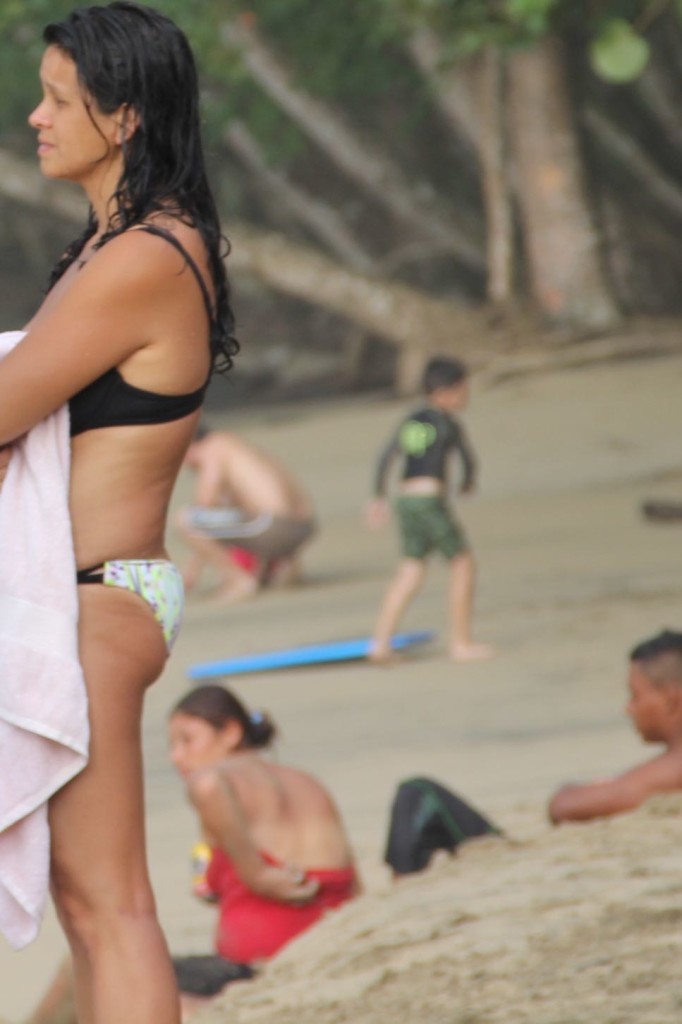 Now here’s the thing with swimmer’s ear.  Everyone has a tried-and-true solution.  The groundskeeper had me hopping up and down on one leg while slamming my head with my opposite hand.  My good friend, Falon, said that I was doing it wrong and made me kick my non-jumping leg out while throwing my head to the side.  I’m pretty sure I heard some laughing in the background although my people claim it was just birds that I was hearing.

After all the fun and games at my expense, it was still clogged.  We tried alcohol, oil of oregano, and more alcohol.  It would clear up for a few minutes and re-clog.  At least it wasn’t painful anymore.  But I had to accept that I officially could not hear out of my right ear.

I did sleep well that night.  (This also coincided with my week of night sweats – the whirring of two fans turned up to the max and a loss of hearing in one ear meant a good night’s sleep.  I took what I could get.)

The following weeks had me saying “¿Qué?” so much that I think my family thought I was faking and trying to push their buttons. 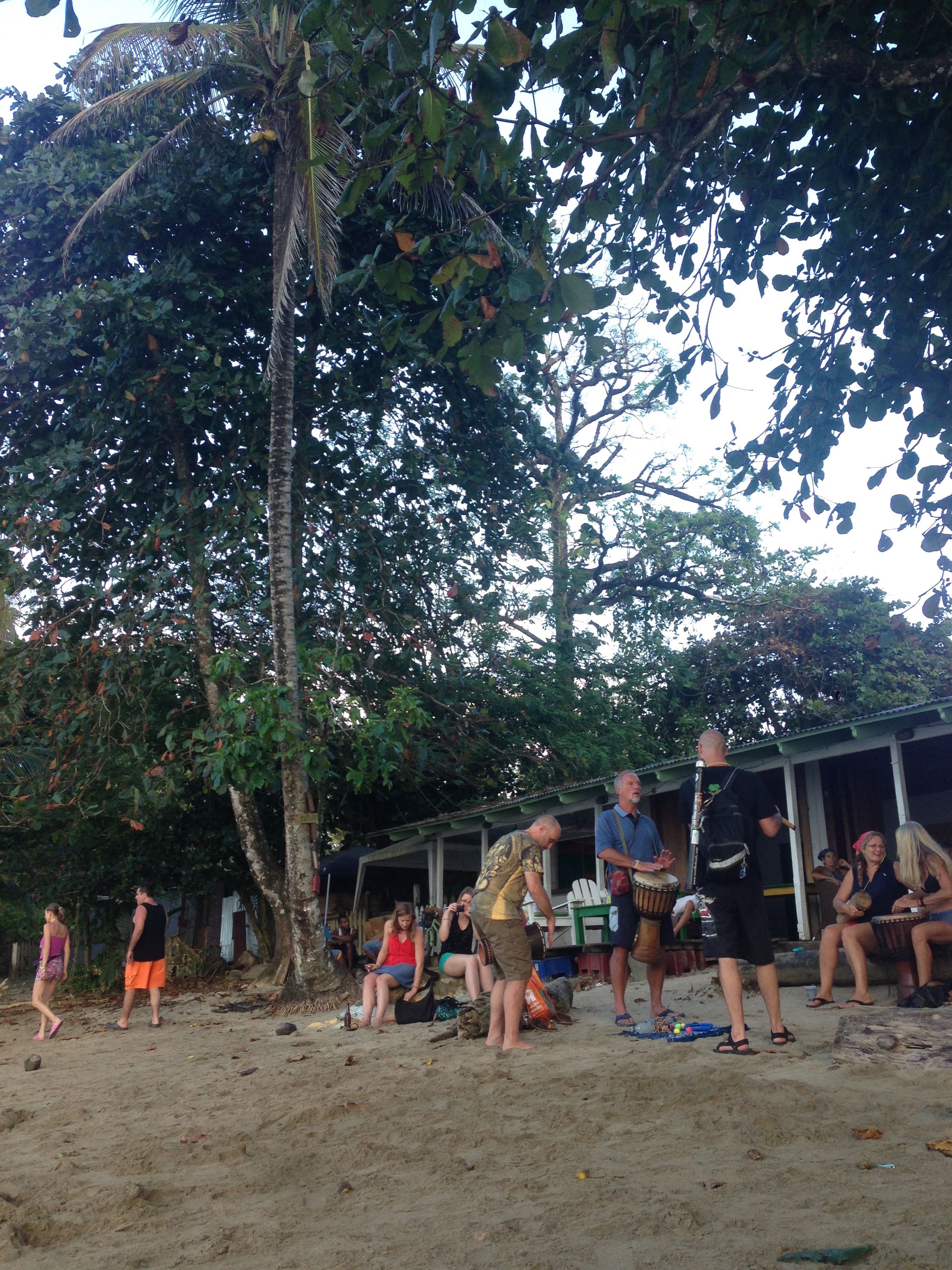 And I am laughing in the picture because Ever-Patient was talking to me in my ear and I am dying laughing because I couldn’t hear a thing. True story. 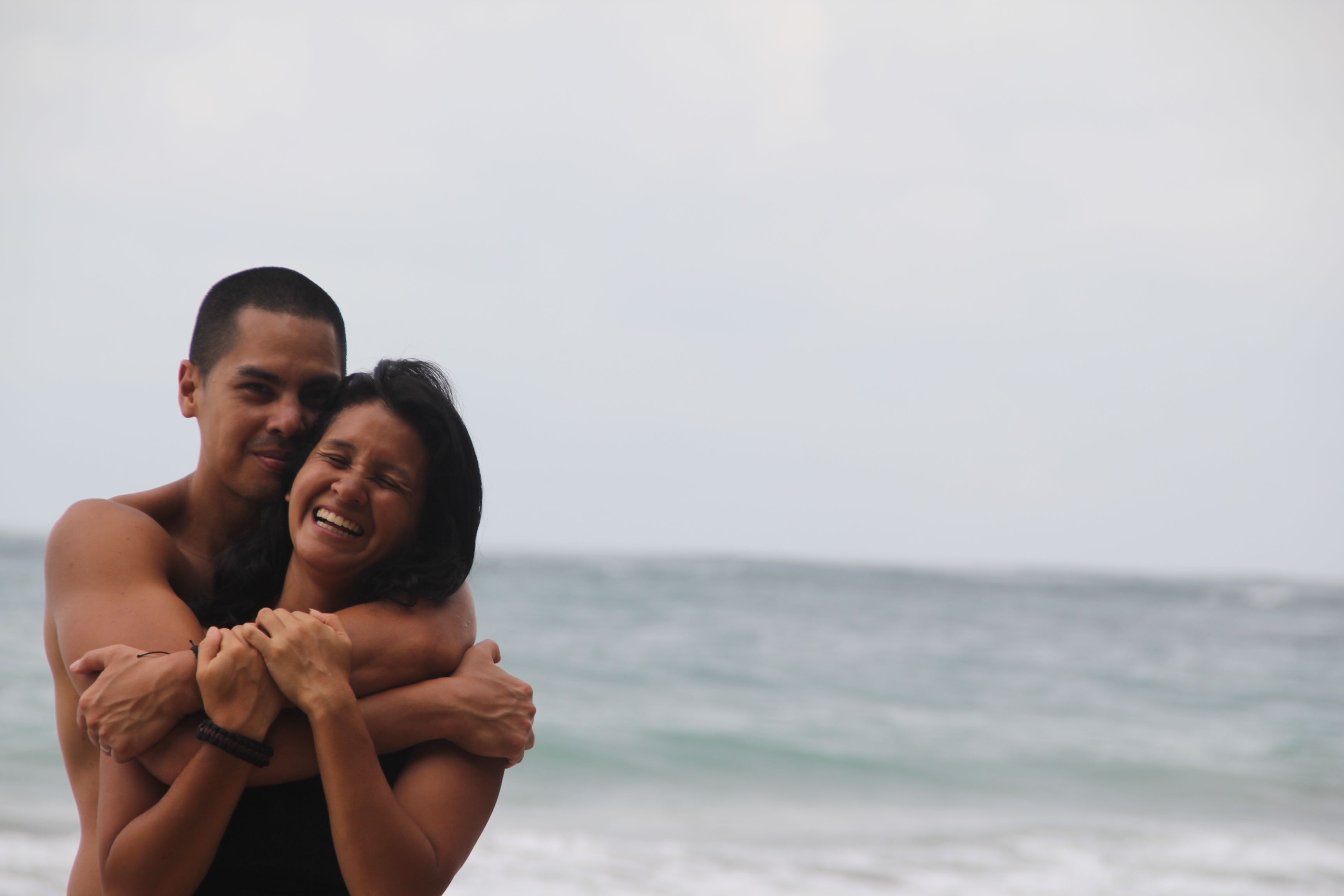 Sometimes we went for walks and he would make the mistake on walking on my right side, chatting the whole time, only for me to turn to him and say, “Oh, were you saying something?”  For some reason, he always ended up on my right side.  I had to turn my head on an angle to adjust or just trust that I was agreeing to something that I wouldn’t regret by nodding my head and hope to remember to ask him about it later. 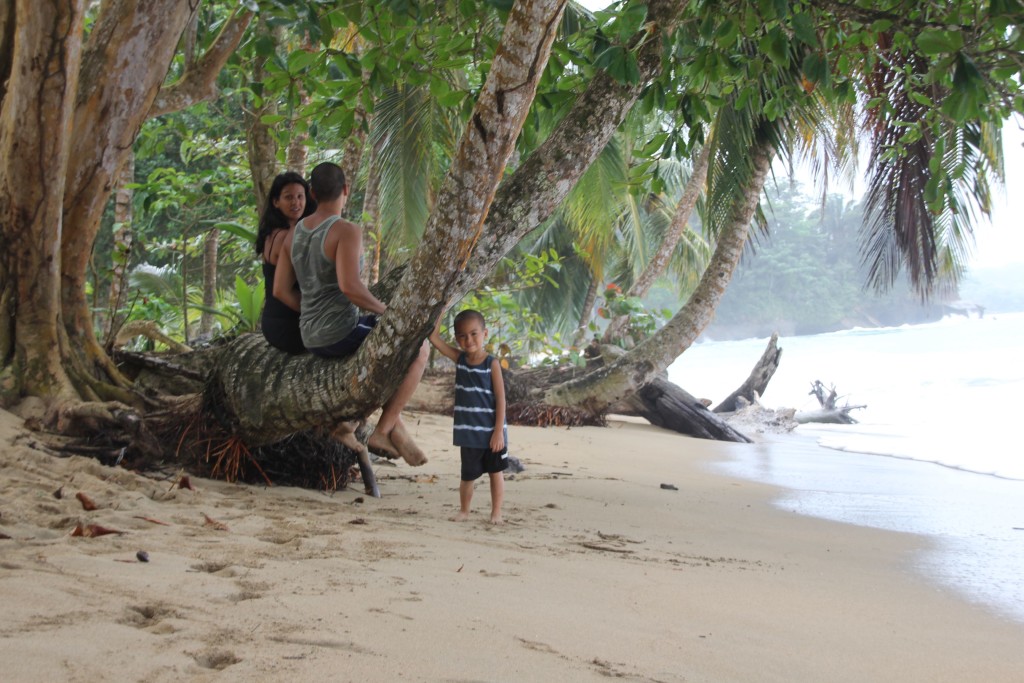 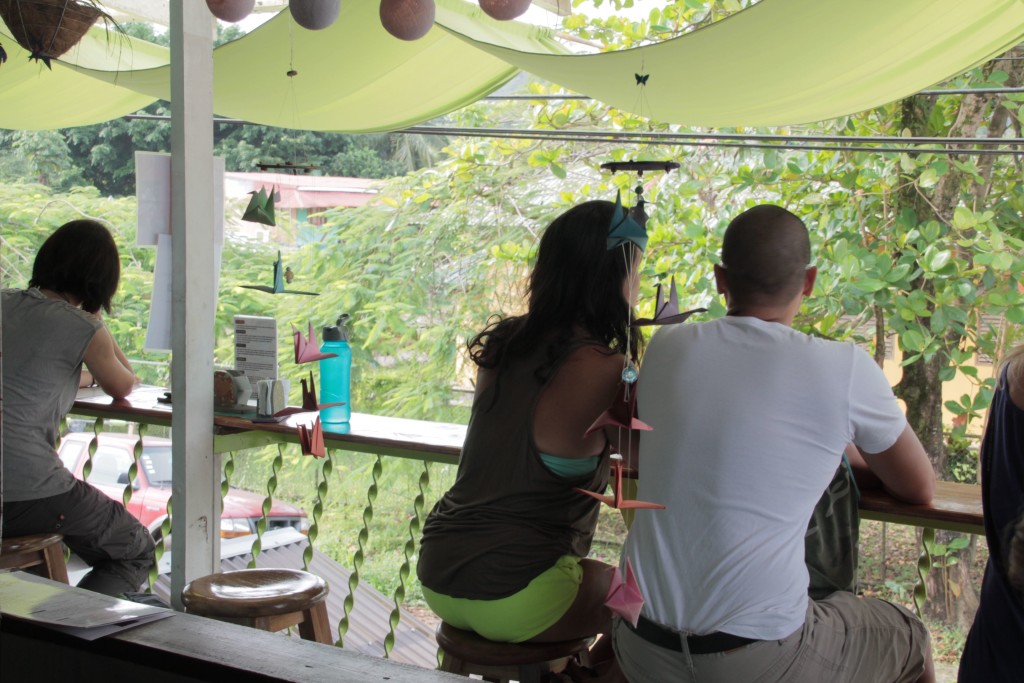 The kids knew which ear was the good one because I would always try my best Beyonce impersonation and sing  “To the left, to the left…” 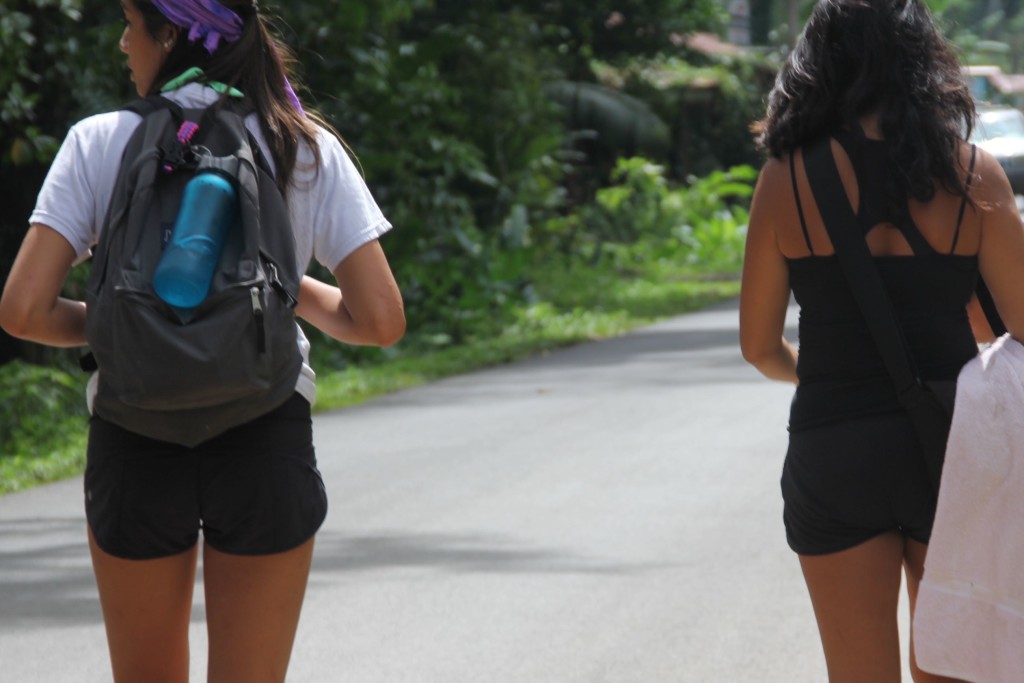 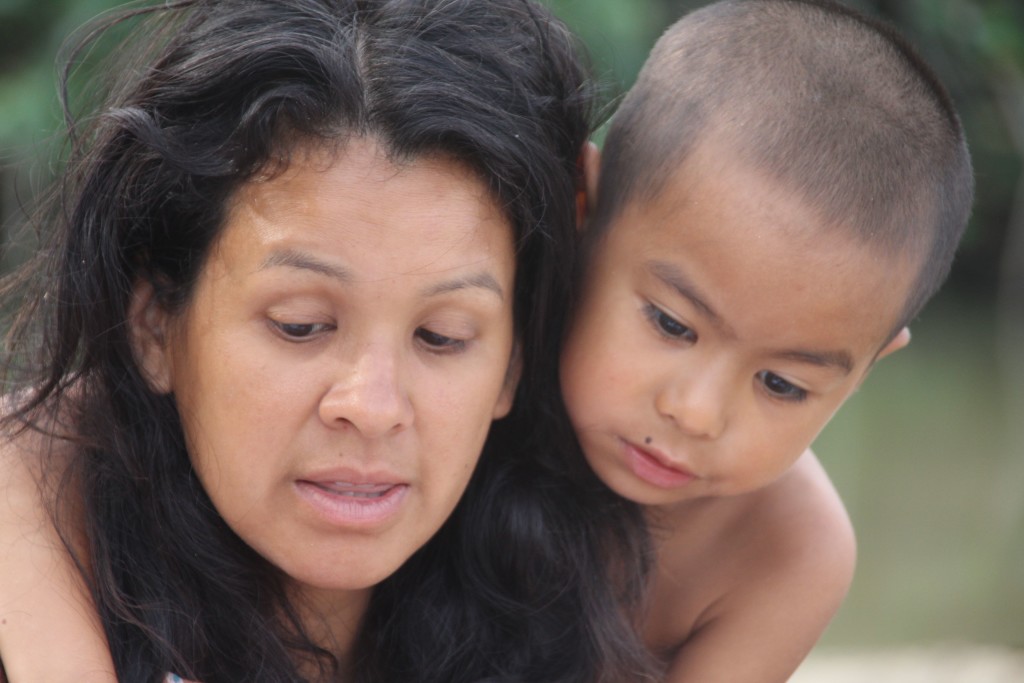 As luck would have it, we saved all our field trips for the last two weeks.  I tried to saddle up beside the guides to hear better but I think they thought that I was a bit creepy.  Good thing #1 took notes because I missed a lot of the information and became the family photographer. 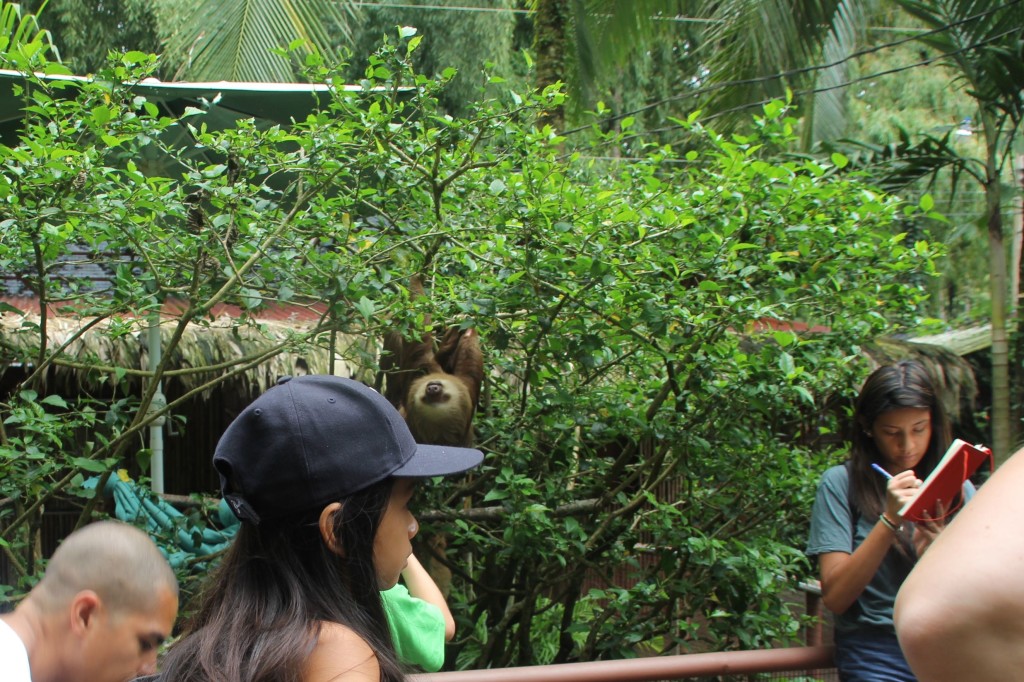 Here I am trying to understand this mango vendor’s Spanish by reading lips.  I tried nodding my head like I was doing with Ever-Patient.  It backfired.  I didn’t realize that I asked for extra chili sauce for my green mangoes.  I also kept trying to pay him but he wouldn’t take my money.  I thought it was probably one of those “lost in translation” moments.  After leaving, I wondered aloud why he wouldn’t take my money.  #4 said, “Mom, he spoke English and said that he was Santa Claus today, giving us the mangoes for free.” I clearly needed more practice at reading lips. 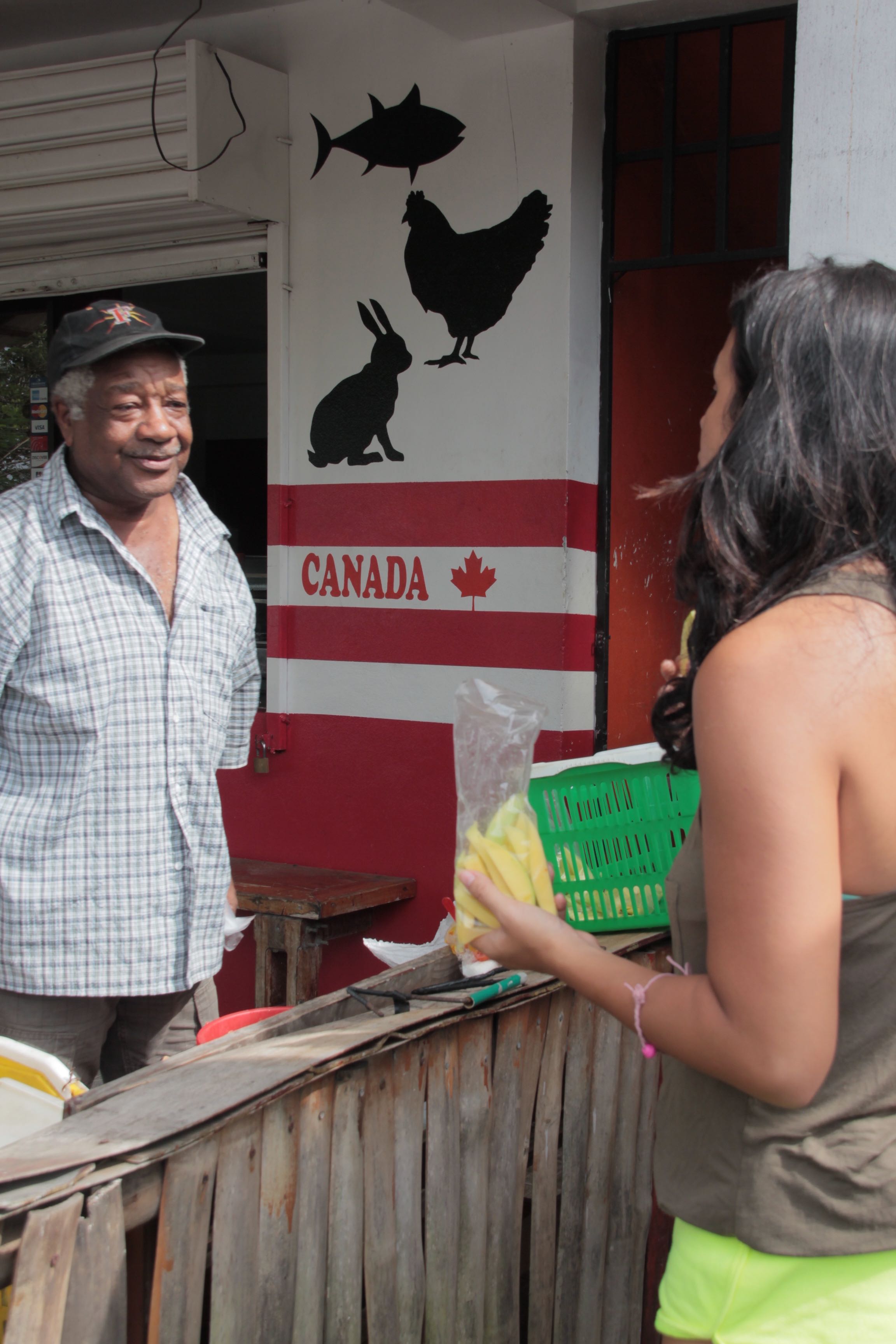 This is me reminding my people who are talking behind me that I can’t hear.  Looks like I am saying, “Jeez!” Though I could be wrong.  My lip reading skills are shoddy.  See above. 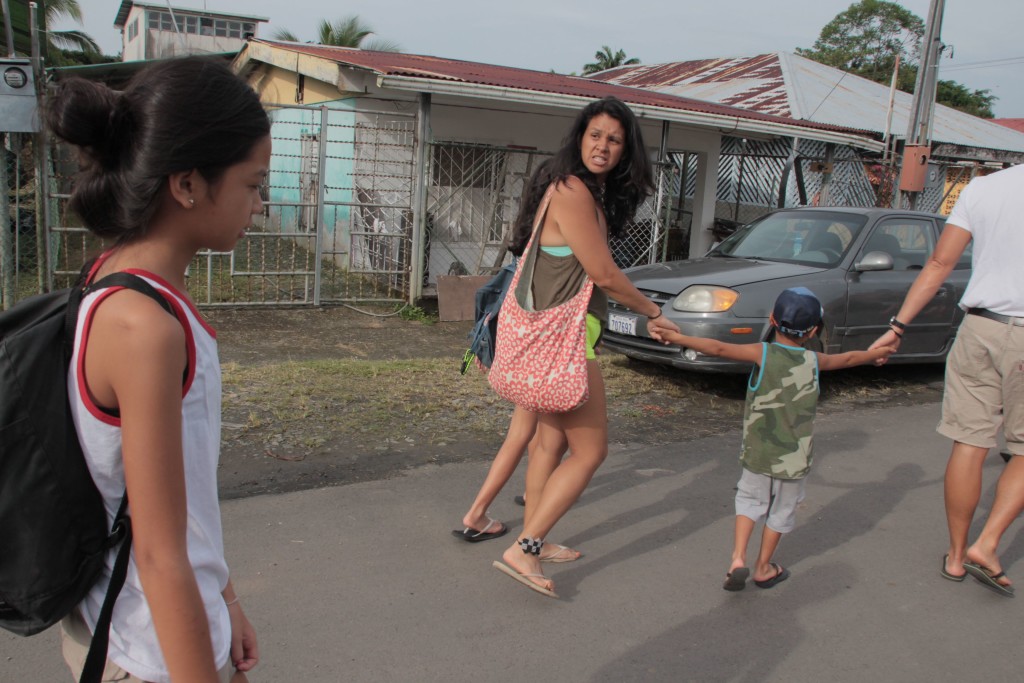 A bright side?  A large troop of monkeys stayed awhile in our backyard.  Apparently, they were quite noisy.  When you looked up, they simply stared down at you, almost like they were sizing you up. I slept like a log but had Planet of the Apes type nightmares.  I really couldn’t win.

Do you see all those dark shapes?  All howler monkeys… 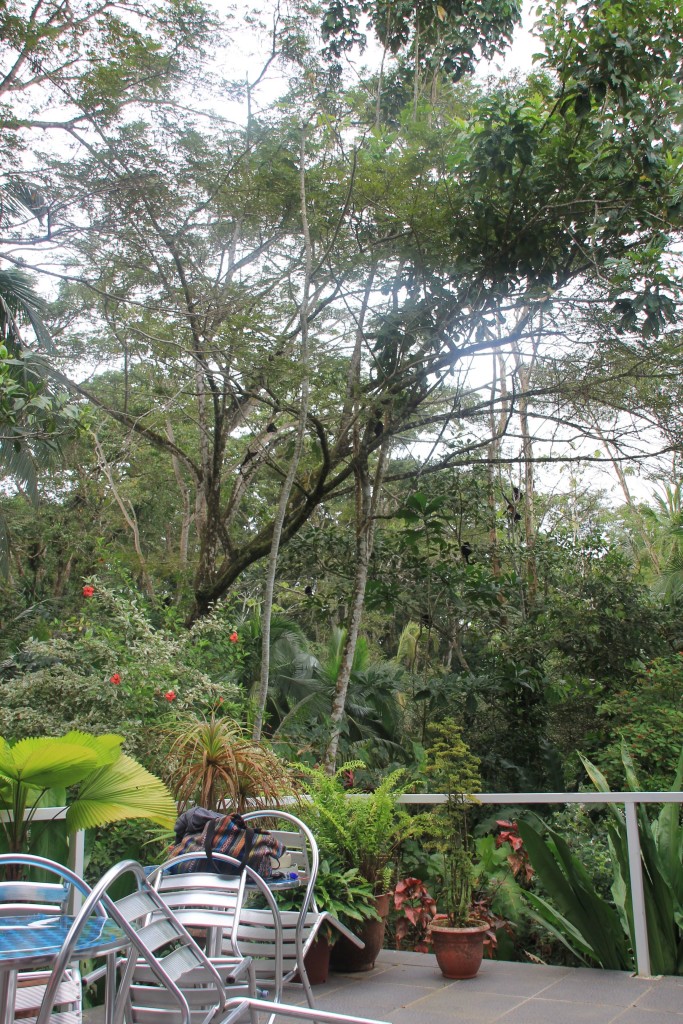 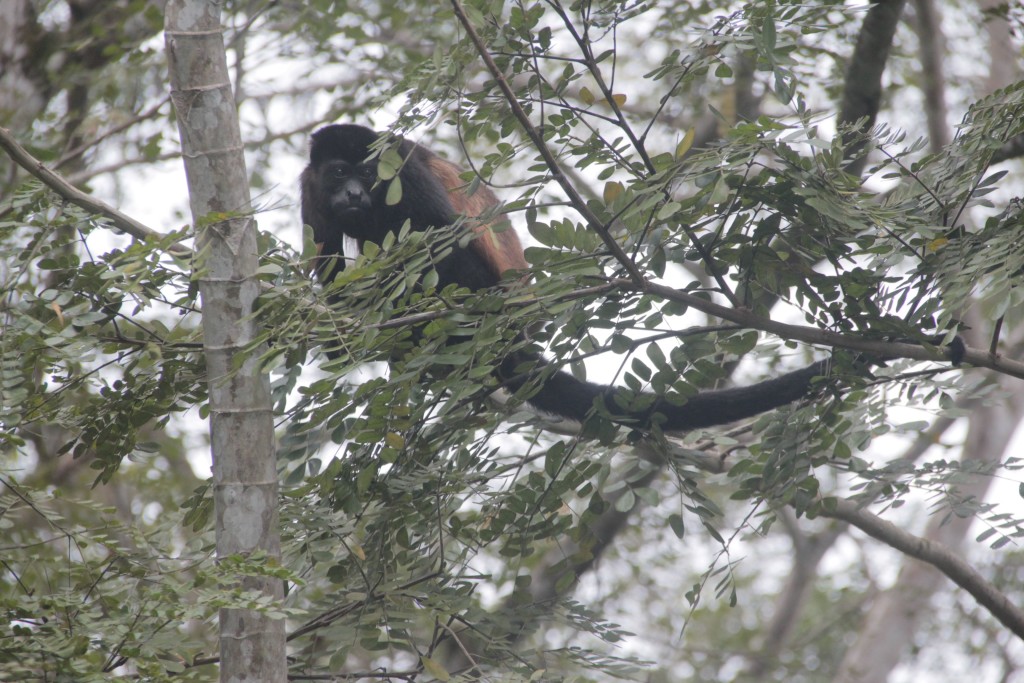 After losing hearing in my right ear, I thought it best not to tempt fate and dive into large waves anymore.  Although my other senses had picked up the slack – I could smell rain coming a mile away and Costa Rican chocolate and coffee made my taste buds so thankful for the hearing loss – I was still honing my lip reading skills.  Losing hearing in my other ear would seriously prove challenging as we still had two more weeks left of the trip.

My husband would beckon and I would gingerly wade into the water up to my belly button and not go any further. 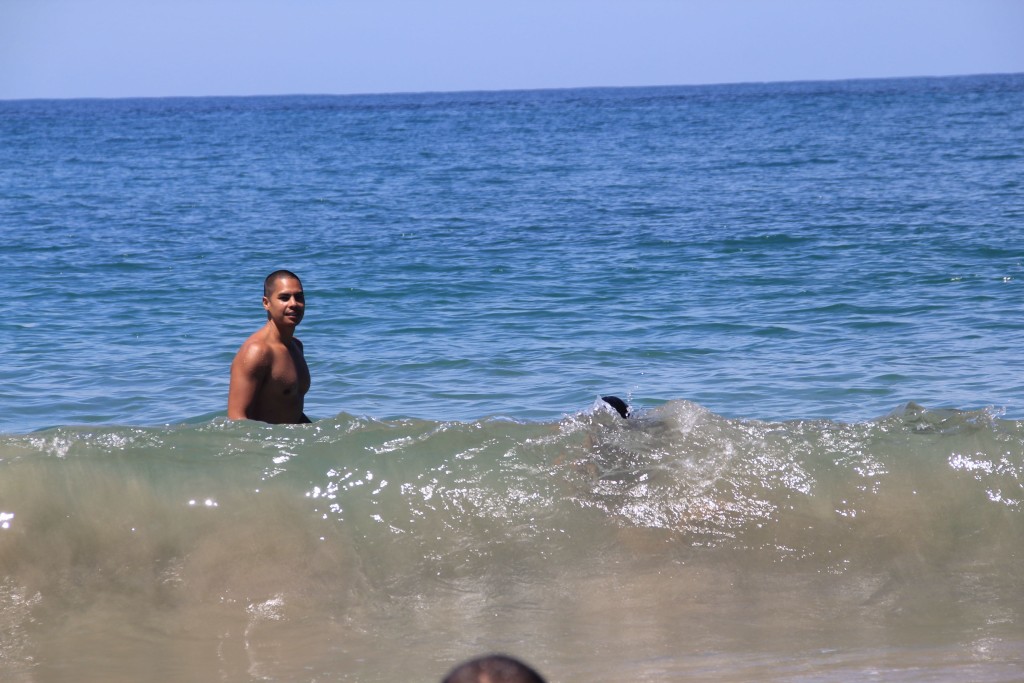 I’m not much of a risk-taker so I ruled out surfing lessons.  I was pretty bummed because it was an edge that I really wanted to push considering I have a fear of open water.  But I did not want my other ear to get clogged because that would be disastrous for all.  I think my family was thinking the same thing.  But Falon, my pusher (and by pusher, I mean my edge-pusher), was persuasive and the instructor also felt I needed to do it.

And with much fear and trepidation, I did it.  I am perhaps the most ungraceful surfer that ever lived, but I tried and I didn’t lose my hearing in my left ear. Bonus.

For 75% of our trip, my right ear was clogged.  I murmured a lot because the sound of my voice in my head gave me a headache. (Analyze away with that one my friends.)  I was forced to look people in the eye when talking which isn’t a bad thing.  I am convinced that’s one reason why I picked up a lot of Spanish during that time.  I had to ask people to speak clearly and slowly for the simple fact that I couldn’t hear.  Even English seemed like a foreign language.  My own people were speaking too fast. At one point, my friends and husband had to communicate using a mix of charades and broken English.

Take a moment and imagine that for a second.

I heard less but I listened more.  I was disconnected to peripheral background noises but I was connected to what I was able to filter in.  I spoke with less volume and only when it was essential.  The colours, smells, tastes, and textures were that much sweeter.

You may be wondering if and when I got my hearing back.

Oh, I got it back and I have come to accept that both the universe and God like to play around with me. The like to tag team.  I’d like to think it’s because I have a killer sense of humour. (Or that I was an evil conqueror in a past life.)

On the way home to Toronto, we had a stopover in Charlotte.  During the flight from San Jose to Charlotte, my ear popped and miracle of miracles, I could hear again. Our flight to Toronto was cancelled and we had to spend the night in the airport.  Upon landing the ear re-clogged. But suddenly, it cleared up in the middle of the night while I was lying on the floor nestling in for a good night’s sleep. Between the lovely man calling every relative in India to chit-chat, another man’s snore sounding like an airplane in constant take-off, the whirr of an industrial sized vacuum at my head, and the automatic P.A. stating every 15 minutes to not leave your luggage unattended, I heard it all.

I gave up on sleep.  I sat up and watched everyone asleep – everyone who put up with my hearing loss nonsense and my “I didn’t hear a word you said” on repeat.

Falon and Ever-Patient sat up and I mouthed to them, “Good news. I’ve got my hearing back.”

I have never seen people laugh so hard in the middle of the night stuck at an airport.

And that must have been one of the sweetest sounds I heard all month.

Check out Sense of Story today!  We have a collabo outlining our dream day…I’m sure you can guess what mine looks like…