32. Listen carefully. Every collaborator who enters our orbit brings with him or her a world more strange and complex than any we could ever hope to imagine. By listening to the details and the subtlety of their needs, desires, or ambitions, we fold their world onto our own. Neither party will ever be the same.

We are in Costa Rica. 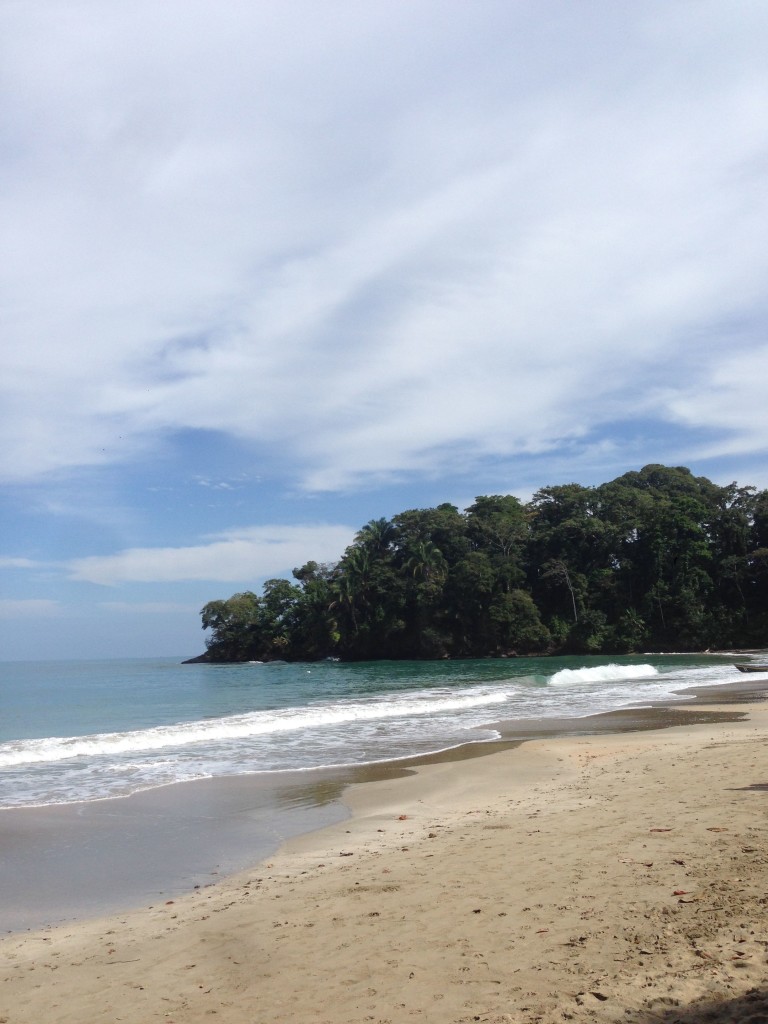 It’s Day 5 of our trip if you don’t count our travel day which took us about 19 hours door-to-door.  Two planes and a crazy car ride.  A car ride that included a winding mountainous route, a police check, some sketchy detours, and a pitch black drive along the coast.

But we made it and for the last 5 days we have been settling in.

Truth be told, I haven’t been able to sleep through the night at all. 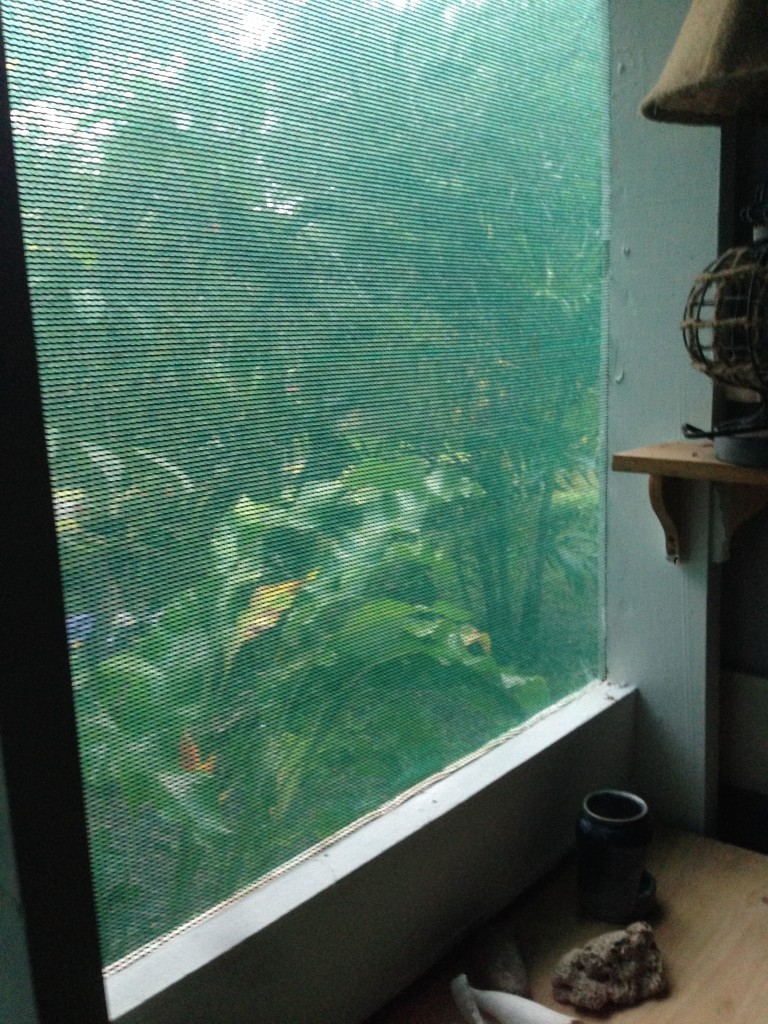 Our house is all screens which is lovely because it lets the air flow through in the day keeping the house cool, but at night, you can hear everything.  You can hear the jungle noises: the odd bird (or was that a frog?), the howler monkeys, the torrential downpour on the tin roof echoing all around, the orchestra of crickets, and what seems to be a choir of stray dogs barking, it seems, just outside my window.

Oh and did I mention Mateo aka Ricky?

Let me rewind a bit.  We arrived around 11:00pm  on the first night in full exhaustion mode.  I hadn’t slept the night before because we were leaving the house at 3:00am for a 6:30am flight.  I was dirty and cranky and just wanted to crash into the bed.

At 4:00am, I woke up disoriented thinking a monkey was screeching in my ear.  Then after a few minutes, I quickly discerned that it was a rooster crowing right outside our window which as I have mentioned is pure screen.

Ricky, which is what my good friend Falon – animal lover extraordinaire – named him, walked around the outside of the house cock-a-doodle-dooing for the rest of the day.  Yes. ALL day.  The groundskeeper, Cruz, politely introduced us to him and said his name was Mateo and that he liked to follow him while clanging a pot (and by that I mean the rooster following Cruz).  And he promptly demonstrated this trick like a proud pet owner.

Sloths, lizards, and monkeys- those critters I fully expected.  But a rooster?? Good Lord.

I am pretty sure Cruz picked up on my lack of affection for Mateo and promptly escorted him to the other side of the property where I gathered, through my limited understanding of the Spanish language, that he was “working” (the rooster not Cruz).

Cruz does not speak English except for the following words: Good Morning and coconuts.  It’s a game of charades every day. I try to recall all the Dora episodes my kids used to watch before we got rid of cable which I am regretting now.  Telemundo would have done me some good.

Even though Ricky/Mateo has moved a bit farther, we can still hear him in the faint distance throughout the day.

But I still have had trouble sleeping.

I am a light sleeper and even with the fan going on at night, the white noise does not drown out the rest of the sounds.  Each night, there is a different sound that wakes me up.  Last night it was the bird or frog that sounded like an old Quebecois man saying “Oui.”  Another night was the howler monkeys chatting away. Another night was the rain which was actually quite beautiful.

Coming to Costa Rica, I thought it would be the sights that blew me away – the beaches, the vistas, the greens of the massive jungle ferns, the tropical flora, and the blue skies and blue ocean.

But I’ve been to tropical destinations before and the sights are very familiar except for the walks through the lush rainforest –  a feast for all the senses. 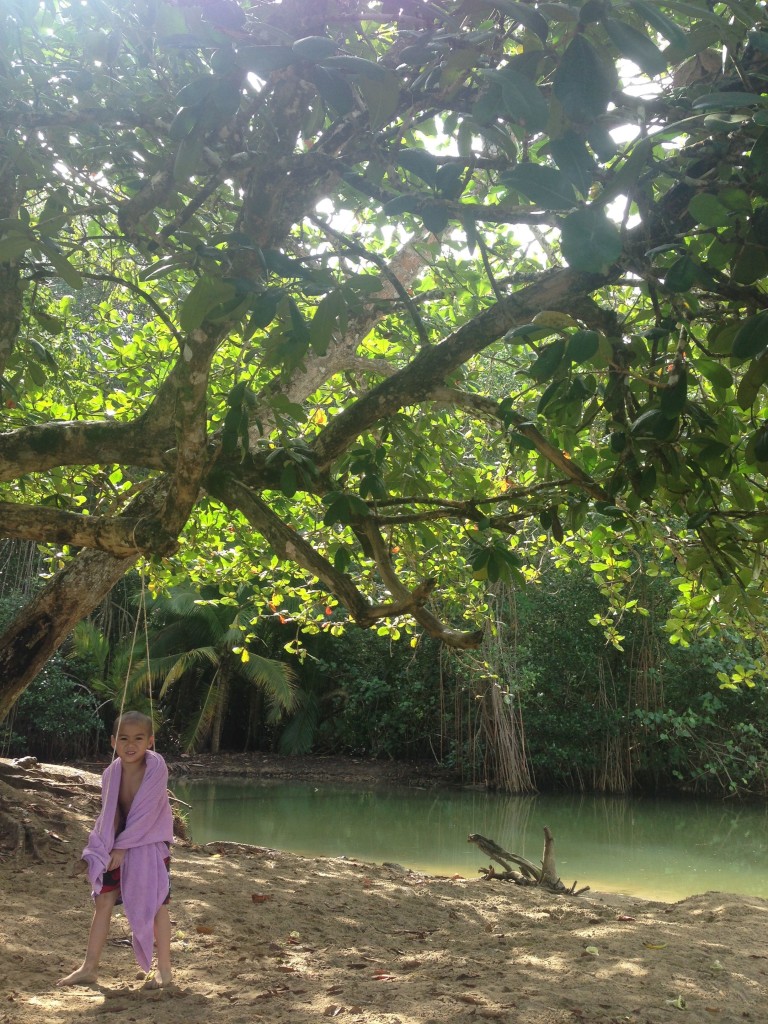 (As I am writing this, I just heard a bird that sounded like a car alarm.)

For the most part, the tropical hues have been a welcome but not novel sight.  The sounds, on the other hand, have thrown me for a loop.  I am listening carefully, frequently stopping along our trail to the beach to listen to the different bird calls and the crabs scurrying along the trail back to their holes as the sound of my footfalls reach them.  And as I walk further, I try to pinpoint the exact place on the trail where I start to hear the waves… 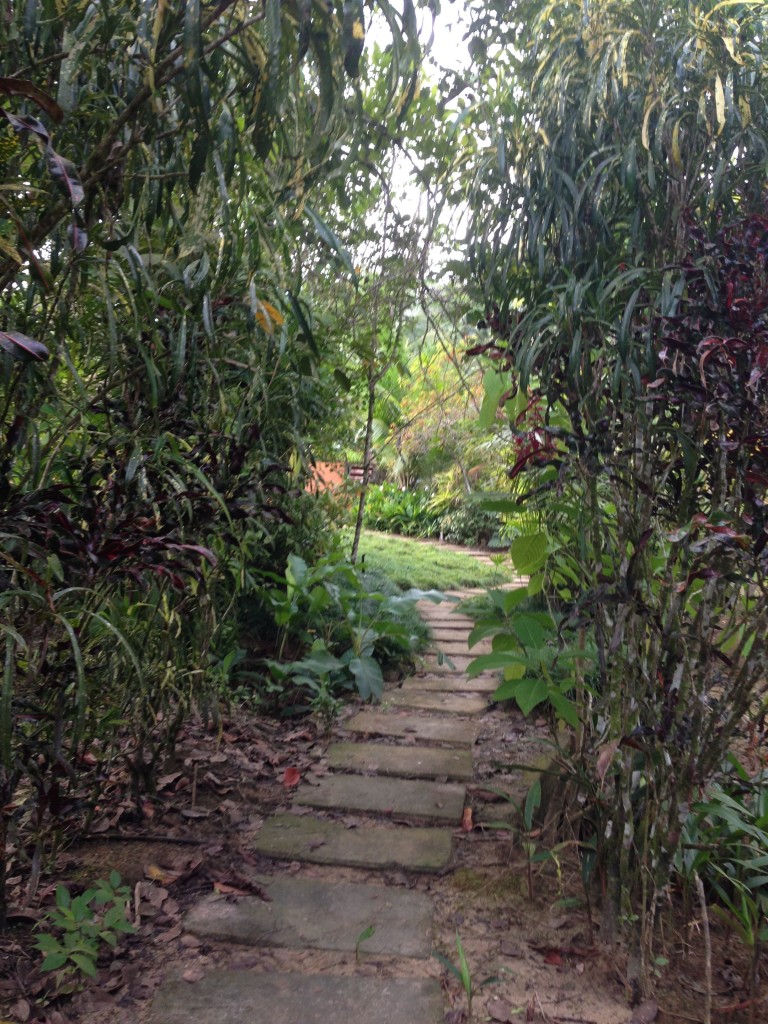 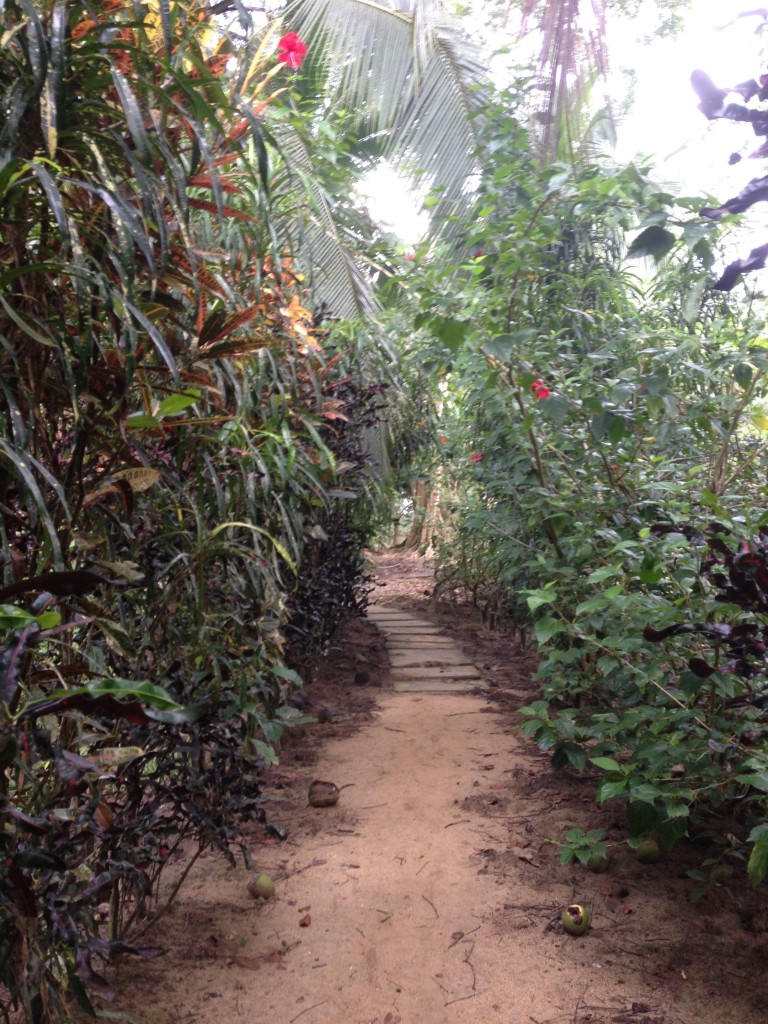 I can hear the ocean just after we pass the big tree below: 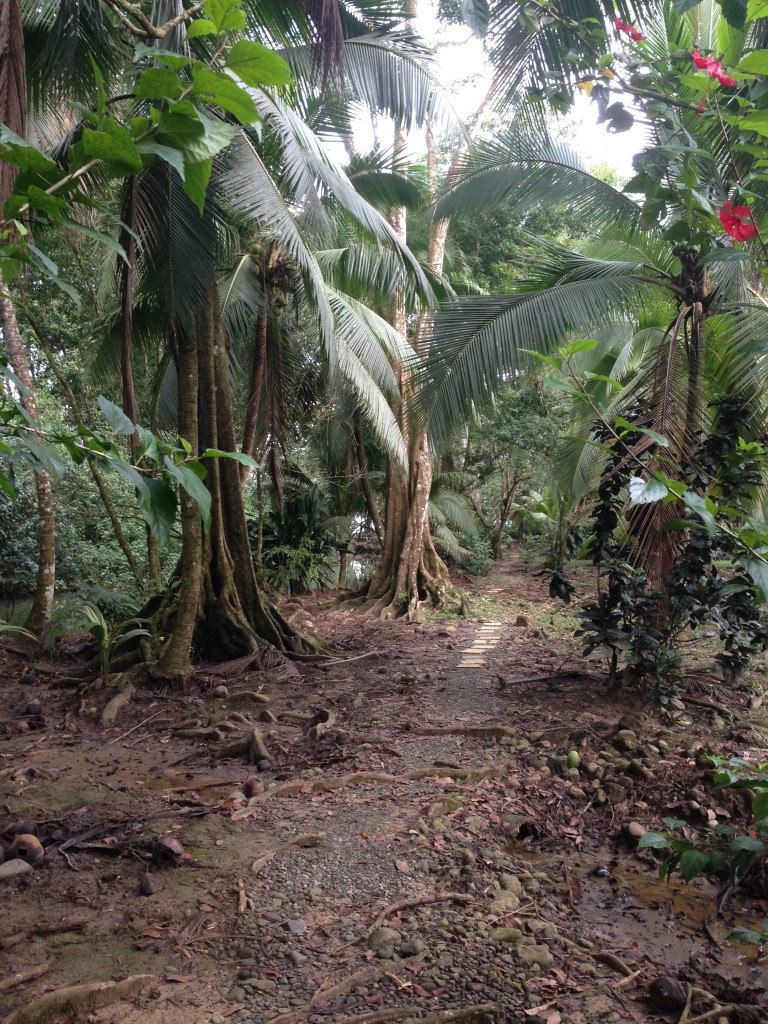 The river is to our left as we walk the trail and leads us to the beach, about 100 feet from the house. 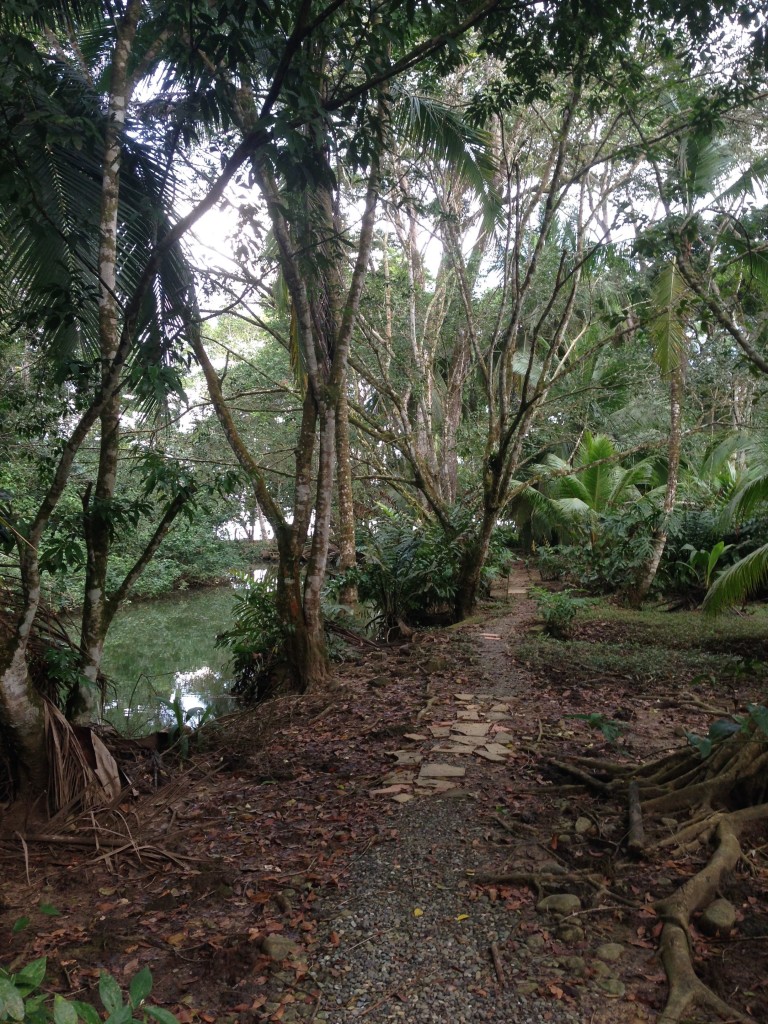 These are all new sounds.  After living in one place for so long, one tends to take for granted the sounds around them.  Over time, I have become desensitized to our city’s mishmash of noises, sleeping through the sounds of fire engine sirens, raccoon street fights, and the neighbour’s dog.

In Costa Rica, my sense of sound feels alive again.  Brand new sounds are reaching my ear.  And the longer we are here, they will become the new familiar.

I am practicing my Spanish as much as I can.  Most people can understand and speak a little English here so I’m sure that I can get by speaking English.  I used to shy away from even making an attempt at speaking the local language during my travels. But I don’t want to do that anymore.  I want to get out of my comfort zone, re-train my ear, and just go for it even if I get frustrated or look like a fool.

We’ve even found a friend here to teach us Spanish.  Jessica (pronounced Yessica) is an artisan from Argentina who travels all over South and Central America with her partner and 3 year old daughter selling their handmade wares. She has graciously agreed to teach us Spanish while we teach her English.

We meet every few days and sit on the beach and chat.

And sometimes, she takes us behind her home to look for monkeys by walking quietly and listening: 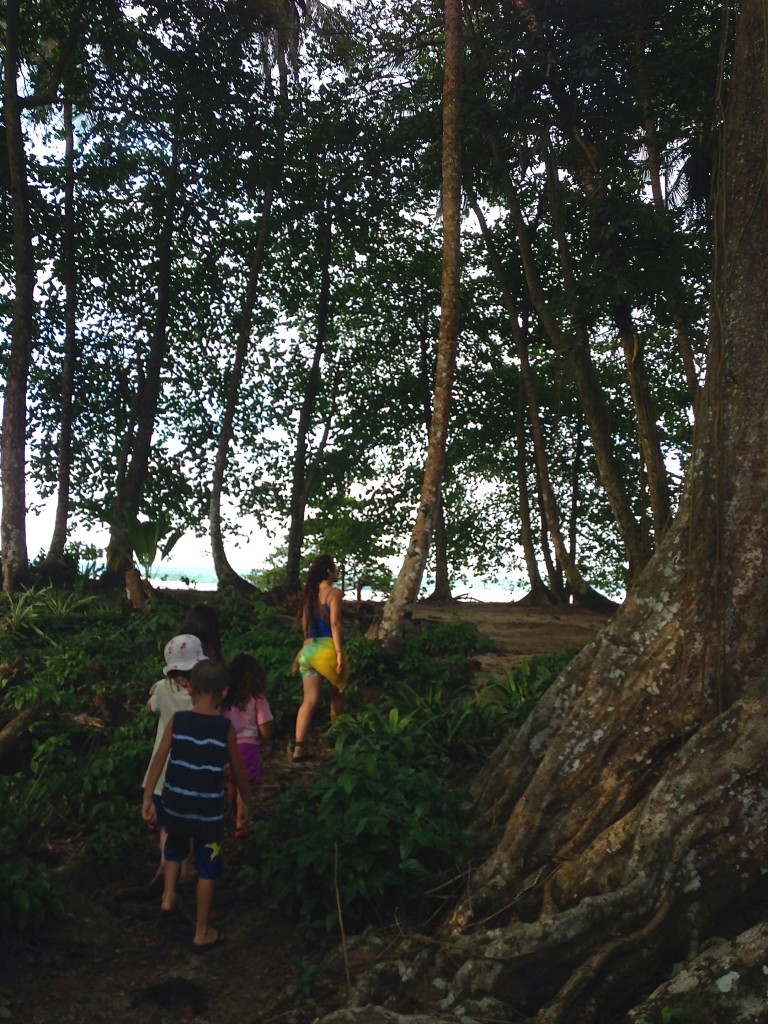 Talking with Jessica, I have discovered a few things:

3. There is nothing cuter than a 3 year old speaking Spanish and calling her mama, “Mamita.” (FYI: I am making all my kids call me that.)

4. I am grateful for learning Tagalog from my family because of all the Spanish words that cross over.

5 . Learning a language from someone who makes eye contact with you and who you have to listen to in person beats learning it on the computer every time.

6.  I love how there is an element of humour in getting lost in translation and some bad charades making it even funnier.

7. Sometimes there are no words to describe a sunset on the beach drinking a canned mojito with old and new friends.

8.  Our conversations begin with basic exchanges but always turn into philosophical discussions.

We’ve only been here a few days and the sounds have changed me already.  I had no idea what to expect when we came here. But nothing prepared me for everything and everyone being a collaborator, a player in this adventure.  Every interaction is a an exploration in listening.

By listening to the details and the subtlety of their needs, desires, or ambitions, we fold their world onto our own. Neither party will ever be the same.

One response to “32. listen carefully.”