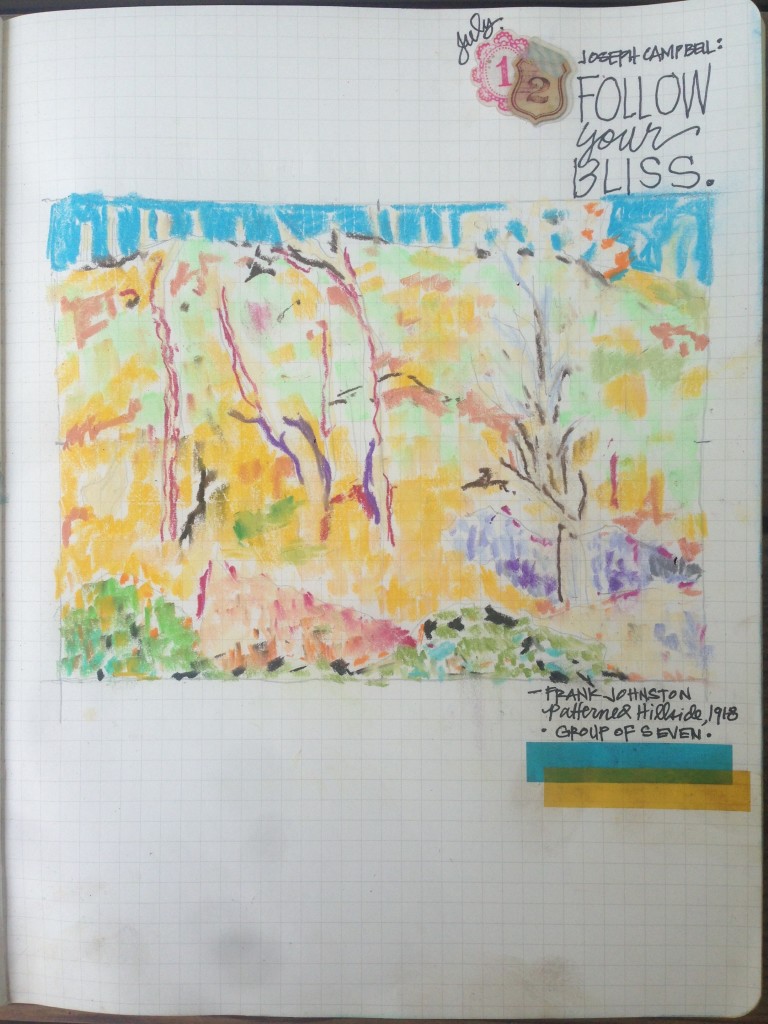 Three words that really pack a punch.  It is the phrase that sparks challenges and debates on practicality and financial security. It implies that you follow something that may still be a mystery to you.

What is my bliss? What makes me happy?

For my Book of Hours, I copied the painting Patterned Hillside by Frank Johnston.  Frank Johnston was a part of the Group of Seven.  The group members were pioneers in creating new ways to paint the Canadian landscape which people had viewed as ugly.  It wasn’t as spectacular as the European countrysides and seascapes that their contemporaries – the Impressionists – were painting.

If you can see your path laid out in front of you step by step, you know it’s not your path. Your own path you make with every step you take. That’s why it’s your path. ― Joseph Campbell

The Group of Seven paved their own path with each artist seeing the Canadian landscape differently.  But the common thread was a celebration of originality and a desire to follow their own path, their bliss but to do it while supporting each other.  As a family, we are huge fans.  We have seen their paintings in real life and have copied their art into our sketchbooks. My children are amazed when I tell them how they weren’t popular artists in the beginning.

A.Y. Jackson commented on those early years of the Group:

It’s probably hard for anyone looking at my landscapes today to realize that I was once regarded as a rebel, a dangerous influence; that I’ve been told I was on the verge of insanity, that my painting was nothing but meaningless daubs. Lawren Harris, the man most responsible for drawing the Group of Seven together, was accused of something perilously close to treason – his paintings, said his severest critics, were discouraging immigration.

The quote “Follow your bliss” has been a magnet on our fridge for the last 14 years.  But I never really understood the message until now.  Until I had five children who are growing into themselves. I have watched my children take their first steps as toddlers but now I watch them take first steps on their own path in life. I watch them double back.  I watch them stand at forks in the road.  I watch them blaze their own trail.  I watch them change their minds and set them in stone. At times I still lead the way, but I have learned when it is time to let go so that they may go ahead even to places that I can’t follow.

The biggest lesson that my own Group of Seven has taught me is to trust that they will find their way.  My path is not their path.  I can show them many sample paths and warn them against dead ends and treacherous terrain but in the end, they will find their bliss by simply being themselves.  Being able to live the life according to their own terms is what being alive means – this is bliss.

My job is to create the space and time for them to do it in: a safe place where ideas and interests can be cultivated or thrown to the wayside; a place where we can celebrate each other’s strengths; plenty of time to daydream, to suppose, to contemplate, and to imagine outrageously; and a place to land or to return to regroup – an understanding embrace in a home full of love and support.