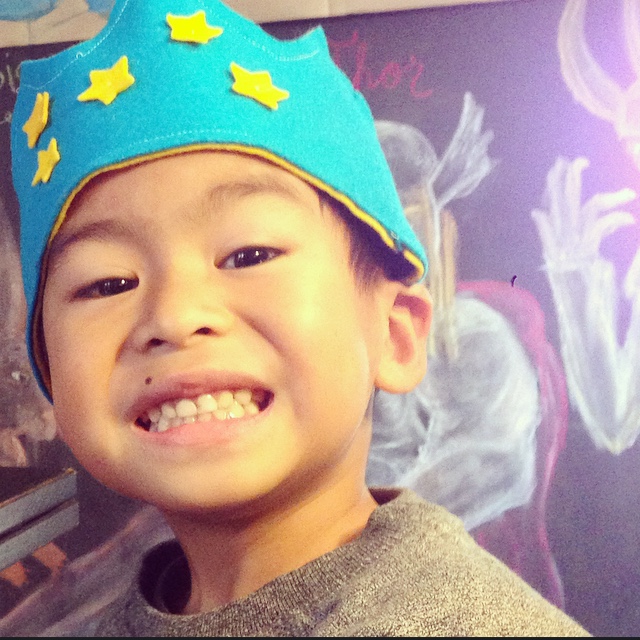 His October birthday is the last one on our calendar for our family of 7.  The girls’ birthdays are in succession: April, May, June, July.  It is even in birth order – completely unplanned.  His 5th birthday capped off a year of transition for my family.  I noticed more than ever a change in our collective identity as a family and even more of a change in each of our individual identities.  The lines between “me” and “you” have become more defined this year than ever and I have had to adjust my mothering to celebrate that.

We took him to see the movie, Island of Lemurs, because his favourite animal is the lemur (although the sloth is a close second).

On his vision board, he has pictures of lemurs which I have now limited to only one because his collection of exotic animal photos on his part of our family vision board is scaring me a little.  I’m happy he has these visions of animal encounters but since we share a vision board, I’m afraid that it is dangerously close to my visions of white sand tranquility. (“Get that Komodo dragon off my beach!“)

In the movie, I learned the word ‘Lemur’ means ‘wandering spirit’ or ‘ghost.’

My son isn’t a natural wanderer.  He likes to stay close unless he is in his trusted circle of family and friends where he feels safe.  He is more of a wanderer when it comes to his imagination and his mind.  He can easily slip into imaginary narratives and worlds on his own and can construct things from his thoughts – all he needs is the recycling bin and tape.  He has an amazing memory right now and his questions send him on a wander in his own thoughts.  (The problem arises when I need to direct this wandering spirit to less wandering and more tidying.)

But when I plan something for him, like a story or an activity, he tends to get distracted after something catches his fancy.  Sometimes I say a sentence or talk about an animal and poof!  He’s gone! He has an idea like creating these animals he heard in my story: 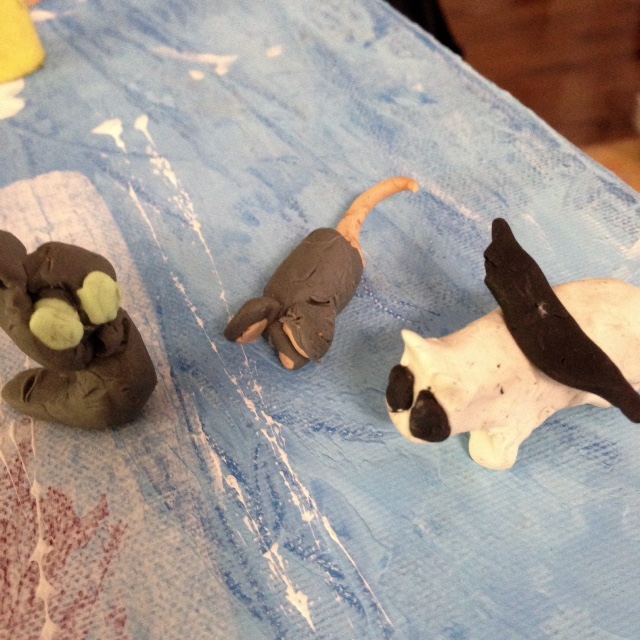 …or more like imagined because I don’t remember mentioning a flying lemur or an alien worm with glow-in-the-dark eyes in my cute little forest animal story.

And I am left telling the story of the autumn animals’ gathering to myself.  Actually, #3 came to join me totally engrossed in the story.

I have seen him grow outward this year, wandering away with friends of all ages.  I have observed that he rarely checks in with me by grabbing of my hand or pant leg this year.  He sometimes disappears for an entire afternoon in the woods, at the beach, or in the basement of a friend’s house.

But he still needs me to push him on the swing.  The other kids have outgrown that although they still ask to be pushed.

Sometimes he doesn’t need me like when he becomes the Flying Spider: 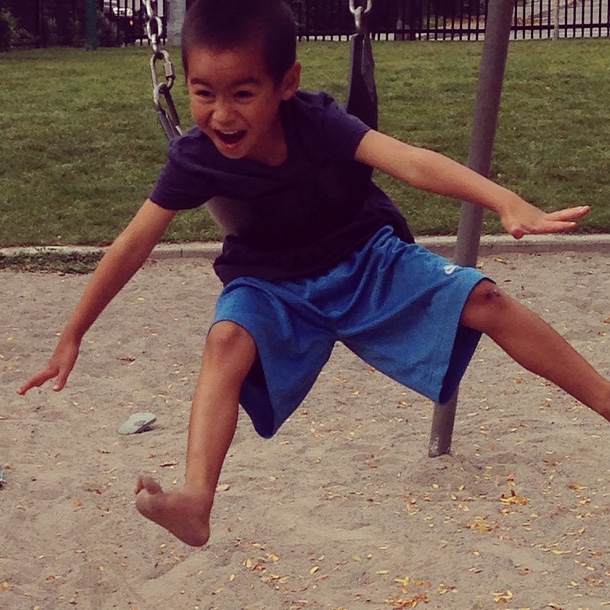 When he tells me he doesn’t need me to hold his hand while we walk down the street, my heart feels that little twinge.  You know that twinge?  It’s the same twinge I get when I sit with my oldest and help her budget and plan for her trip to Argentina next summer.  It’s the same twinge I get when my second-born tells me she can walk home on her own after her program.  It’s the twinge when my third-born offers to cook or bake when we have company coming over.  It’s the twinge when my fourth-born no longer needs me to hoist her up to those monkey bars that she could never reach. She can now jump and grab them instead of waiting for me to give her a boost.

I want to say, “HOLD ON! NO WAY! STOP! YOU GUYS ARE TOO LITTLE! YOU STILL NEED A BOOST!”

Time reverses 5 years and I see them like this.  I see our family new and young. I see my children not being able to reach anything.  I see my oldest just venturing out into the neighbourhood on her bike and trying to slowly prep her for solitary public transit rides. I see my other children getting accustomed to being without me for their extra-curricular activities.  I see them packing their bags with hesitation as they go for their first sleepovers.  I see each and every one of them still climbing into my bed at night because of a nightmare, an illness, or just  because.  Some still do but for others, I can’t remember the last time they did that.

But this year, I am getting more used to the twinges, the pulls at my heart as I let them go a little more, each one a little further out in proportion to what they need.  The twinges are coming fast and furious but now with this fifth birthday, I have settled into this new phase.  This phase of spiralling out.  This phase of reclaiming my creative self and my individuality.  This phase of loving my children deeper and more than as a means for their physical survival.  This phase of opening up the world to them.

This phase of trusting my “early years” parenting more and more.  I just spoke to my good friend who says she wakes up in the middle of the night filled with terror when one of her kids are sick.  Earlier this year, I woke up with a similar terror.  I  was consumed with the fear that I screwed them up because I didn’t do enough in those “important early years” of 0-5 years and have doomed them to a future full of therapy and dysfunctional relationships.  I have had nightmares of them confronting me as adults, full of mother-blame.  As my children put faith in themselves and the outside world, I too have learned to do the same.

Today, I inquired about the locations of my two oldest daughters.  My other children looked at me crazy and said they had left – one was picked up by another parent for a program and one had gone to work.  They claimed that the other two had kissed me goodbye and I mumbled a goodbye as I was running around the house looking for a missing lid of a thermos.  How did that happen? How did they begin to come and go without me?  How do the other two sisters pack lunch and snack for themselves?

I ask the new 5 year old if he packed his lunch and snacks too.

I race over with a zeal and enthusiasm that confuses everyone around me.

I’ll take what I can get.

I imagine the next 5 years will throw me into a complete different level of motherhood.  In 5 years, I will be a mother to an adult,   two teens, and two tweens.  Gasp.