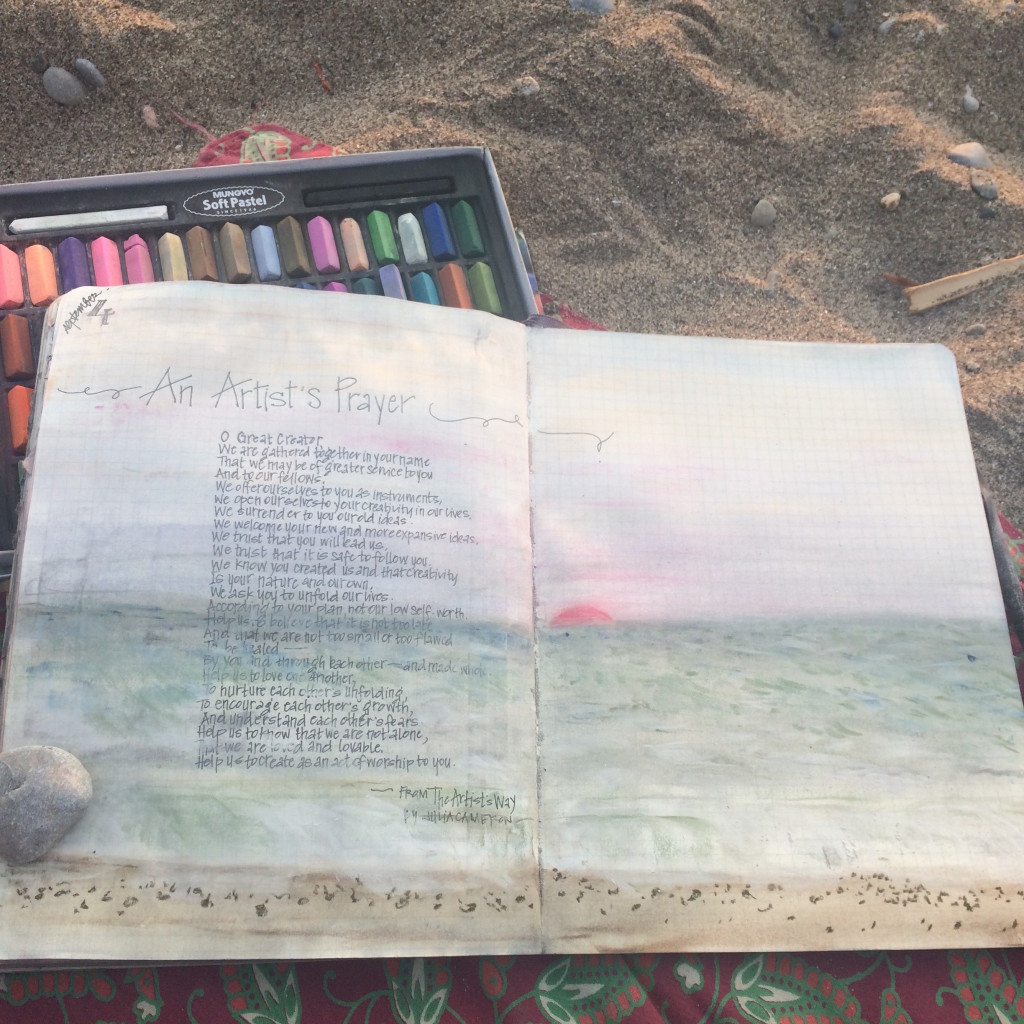 love is a place

& through this place of

(with brightness of peace)

yes is a world

& in this world of

Warning:  This post is a long one today.  Grab a cup of tea and sit back and relax…

Today I drew the sunrise as I watched it.  This was the first time I had attempted it.  It has been such a sacred time for me where everything begins again.

Saying YES was the beginning.

The intention to show up every day led to a profound lesson in letting go in order to receive.

Through my scribbles, I learned that the only way to truly to let go, and to unblock the flow of creativity through me, was to forgive.

This was the miracle that led to other miracles.

Forgiving meant accepting that what had to happen had to happen.  Life has unfolded in such a way that I now can step back and see why I had to experience certain things to get here.  I do not believe that forgiveness means giving permission to be treated that way again or that the relationship is now healed from both ends. Forgiveness means to have compassionate understanding and to trust that it was all a part of my path that I needed to walk.

As I surrender to something greater than me, to God, I am able to release the anger, the resentment, the fear, the attachment to beliefs that no longer serves me.  The opportunity to forgive keeps presenting itself and each time I ask myself, “When has it ever served me to take it personal or hold a grudge?”  In fact, not forgiving has caused me the worst recurring pain.

Only through forgiveness can I be joyful.  Forgiveness always leads to joy.

I sat with myself and saw the cycle of blame I had been engaged in.  My old story included blaming the past, blaming others, and blaming myself.  Once I forgave it all, I felt free to say YES.  I felt free to receive.

During our Quebec cottage trip, I became friends with one of the most joyful and caring souls I have encountered.  (Yes, Jo, I am talking about you.)  Through inviting Spirit to crack me open and be willing to see the world around me as beautiful, I began to draw again at the cottage.  Jo took notice and asked if I would be interested in helping out with a children’s book that a friend was working on.  I said I was interested although I had no formal art training.

I left it at that and then we parted ways after the week ended, vowing to keep in touch afterwards.  On July 13, she messaged me to ask if I was still interested.  At this point, I wasn’t quite sure what was needed.  I assumed that I was being asked for feedback on the illustrations.  I emailed that I was interested in giving feedback and that I would love to read the story.

It turns out that the story is written by a mother of five (who is now a grandmother) from Trinidad.  It is a beautiful sci-fi story celebrating Trinidad and Tobago.  This book is for children, the first in a series where each book explores a different Caribbean island.  It has a simple message of love and care for this part of the world through stewardship, awareness, and understanding.

It also turns out that it’s not feedback they are looking for, they’d like to see if I can illustrate the book and possibly the series.

This email was sent to me on July 13 and the next day, I said YES to myself.

After agreeing to send in some illustrations to the author and the author’s family to see if I was a good fit, I was paralyzed with fear.  I almost bailed.  I tried to talk myself out of it.

But at a pool party with my friends, I decided to tell them about the opportunity and my apprehension.  After concluding that I was an idiot if I didn’t take this job (thanks B, Fal, and Lynn), I decided to just go for it.

Even though we had just begun our upstairs renos and I was in the middle of a hurricane of tidying, I finally sat down on July 27.

I showed up at the dining table and drew with abandon and love.  I read the story and imagined my own five children as these five heroes.  I could feel the author’s love for our earth and children in every page.  I understood that this was my opportunity to honour this woman’s labour of love – to celebrate her country, her family, and all of Creation.  I finished two illustrations without difficulty or angst.  Through the process of drawing, I felt nothing but joy and peace.

I sent them for their review and let go of the outcome.  I wasn’t sure if it was what they were looking for.  I was happy that I did it.  I faced my fears, sat with all the feelings of unworthiness and doubt, and then came out on the other end, believing in this gift I was receiving that I needed to pass on.

I opened an email later that day that brought me to my knees in gratitude and joy.  They loved the illustrations and offered me the illustrator job for all five books in the series. I was paid as an artist for the first time in my life.

My husband and four youngest children were with me that morning as I showed up to the table and surrendered.  They saw me draw and submit it not knowing and being happy at just doing them.  They saw me jump for joy and fall on my knees and cry when I received the email for the work.

Then I texted my oldest daughter who was in Argentina.  She said how she was proud of me.  When she returned home, I was looking through her Spanish homework where she practiced various sentences using verbs and nouns.

She wrote, “My mother is an artist.”

It isn’t about a title or achievements.  It’s about answering a call that I could finally hear once I began to forgive.  To make room for love and miracles.

After that, more miracles began to show up.  Relationships with family and friends deepened.  Encounters with strangers were joyful.  I found myself opening up to everyone I met at Taproot this summer and in doing so, received so much guidance and wisdom from everyone there.  Gratitude was my language for each and every thing that showed up.  It became yes to everything.  And then I looked at my relationship with our finances differently and for the first time, we became debt free outside of our mortgage which will be paid off in a few years.

And then the miracle of this workshop.

Again, I doubted myself and was afraid to even think of charging for a workshop.  But I knew that in order to make this a sustainable endeavour and to believe in my worth, I must charge a fee.

After a couple of mentions in a few blog posts, and a social media shout-out from Rowena at Paper Plus Cloth, I have filled all 12 spots of my workshop that will be held on September 23. (Please email me if you want to get on a waitlist or be on the list for the next workshop date: rdiosolopez@gmail.com).

In September 1997, I found out I was pregnant with my first child.  If I had told that scared little girl that this is where she would be 18 years later, I would not have believed it.  Now I see that everything has been a wonderful gift that I have had waiting for me to be ready to open.

I am only beginning to open them all now.

The first book in the series is called “Caribbean Woman: The Scarlet Ibis Spiral” by Joy Hinkson.  I will give further updates on its development on the blog here including where you can purchase it.

And I hope to have a second Book of Hours workshop soon!  If you would like to be put on a wait list for this first one on September 23, please email me: rdiosolopez@gmail.com