I’ve left you hanging since Monday.  My first intention to pay attention,”Begin anywhere,” has been on my mind all week, infusing every idea, thought, and challenge I encounter.  I was excited to share this post yesterday but I realized that I had to finish up my article on my other home, Sense of Story.  That was my first real test of beginning anywhere.  I had a jumble of notes and thoughts on the article and a pretty shitty first draft.  My message wasn’t clear.  There was something about last year’s ice storm in my notes that wouldn’t jive.

Instead of feeling overwhelmed with all the directions I wanted to go in, I began with a decision.  I decided to tell a story.  A real one.  One that I struggled telling because I didn’t think people would understand.  I was afraid of judgement – judgement of the content and judgement of telling this story publicly because it concerns one of my children.  I am here to tell the truth, my truth as I see it.  A big part of my truth and my story are my children.  Initially, I was going to tell a generic story about finding emotional, spiritual, and physical warmth during the ice storm but my instinct told me to tell this other story instead. I decided to begin somewhere and hope for the best.

And on to the animals…

Lions, tigers, and bears, oh my! 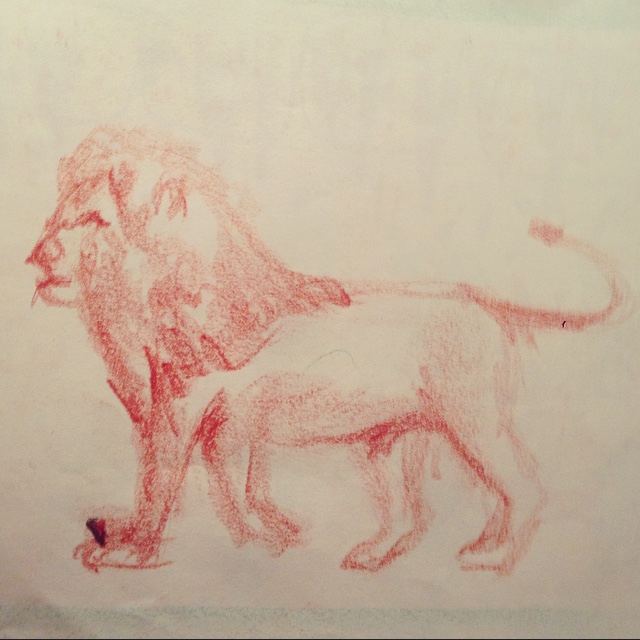 #3 is in the midst of her Human and Animal Block.  We have studied different animals through drawing, modelling, poetry, and watching some Planet Earth videos and Wild Canada episodes.  It’s very hands-on and all about comparing body parts/functions of humans and those of different animals.

My aim is not to teach a zoology unit, studying what animals belong to what phylum, class, etc.  The aim is to have her understand her own individual self by comparing parts of herself to the nature of animals:

…the animal world can be understood in relation to the human being. There is an interweaving and interdependence of everything in the world and when children realise this, they gain confidence and develop a social feeling. If they can understand the world and find their individual place in it, they may realise that they have responsibilities. If they can see that they owe their humanity to the animal creation, the may develop feelings of reverence and gratitude.

– Roy Wilkinson, The Human Being and the Animal World

We began the unit by tracing her body and labelling what parts of her body do:

We talked about how the head receives information and the limbs, especially the hands, can be used to give back, to create, to serve the community and the world.

Coming next was the parade of different types of animals. And of course the anxiety that accompanies drawing animals that look exactly like mama’s drawings.

Drawing is a skill. I believe drawing animals is a difficult skill that is right up there with human portraits.  Give me a landscape any day over drawing animals.  One of my earlier horses looked like a mix of a malnourished bull and a doberman.

And don’t get me started about otters, minks, and muskrats.

When the kids wake up in the morning and rush down to see their chalkboard drawing, they are both excited and terrified.  Some love the sight of the life-sized lion on the chalkboard but others give me a look of dread.

I gently remind all the kids that I have more experience drawing than they do so they should just do their best and practice.  #3 looks at a picture of an animal and just doesn’t know where to begin.  I draw with her – slowly going step-by-step. I bought her this book to practice drawing animals as a warm-up to her lesson:

It’s given her a chance to understand proportion and that all the animals are just made of basic shapes.  She can practice and see how the parts relate to each other.  She also observes the way animal parts affect the movements of the animal.

She started with her favourite animal and tried a rough draft on the chalkboard: 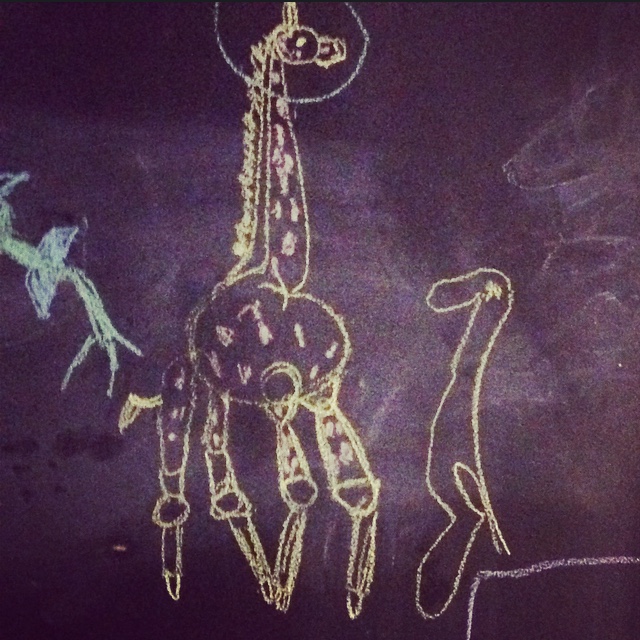 Then she drew one in her sketchbook:

These how-to-draw books aren’t for everyone.  Sometimes they feel a little too rigid and structured.  But if you have a frustrated child who just needs a little more confidence when it comes to drawing, they can help.  Copying a picture, whether it’s from a drawing book, a photograph, or an illustration, helps them observe the details.  I have a child that loves to draw endlessly and copies every single one of my drawings even if it’s not their lesson work.  It’s like a daily practice.  For the last few days, #3 has practiced her giraffe because she notices something a little different each time and tweaks it bit by bit.

I drew this little guy on the chalkboard for #4’s block on Thornton Burgess animal stories: 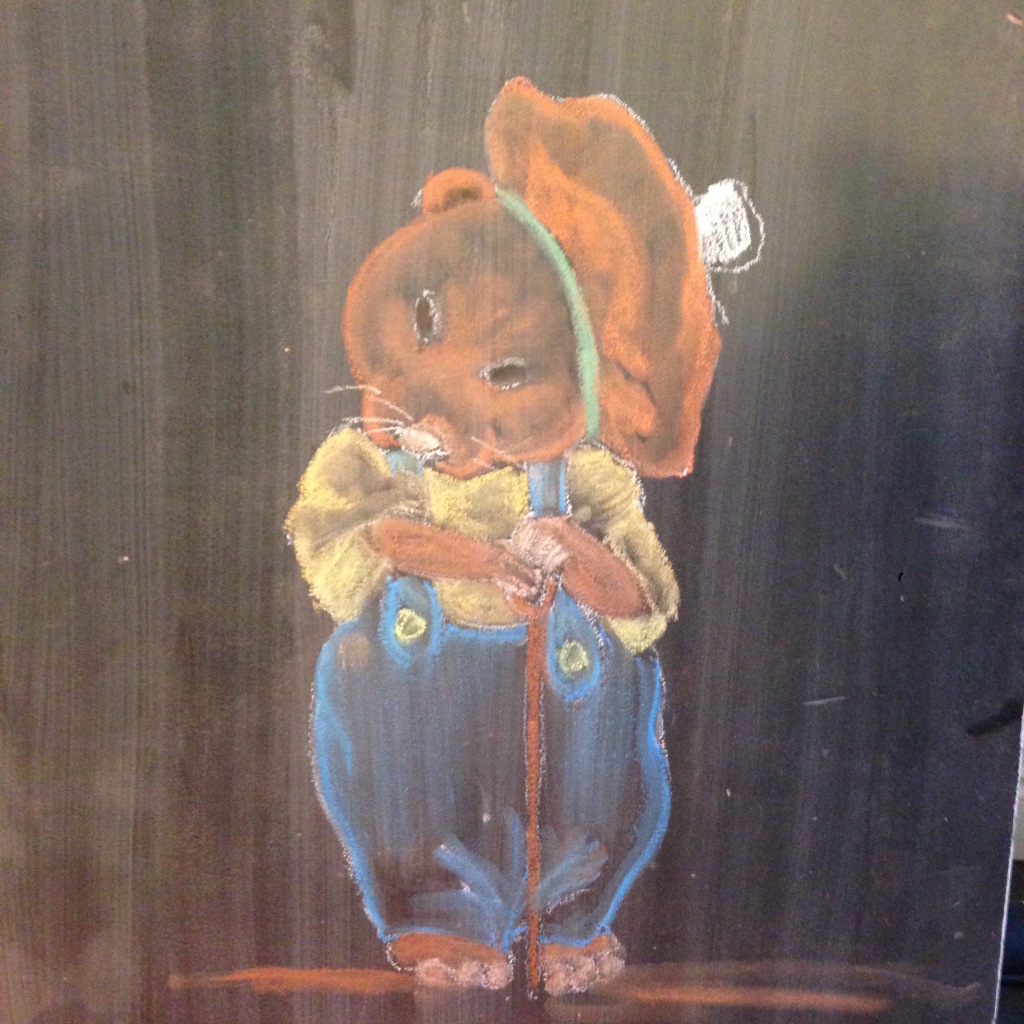 #4 just didn’t know where to start so she only drew his head: 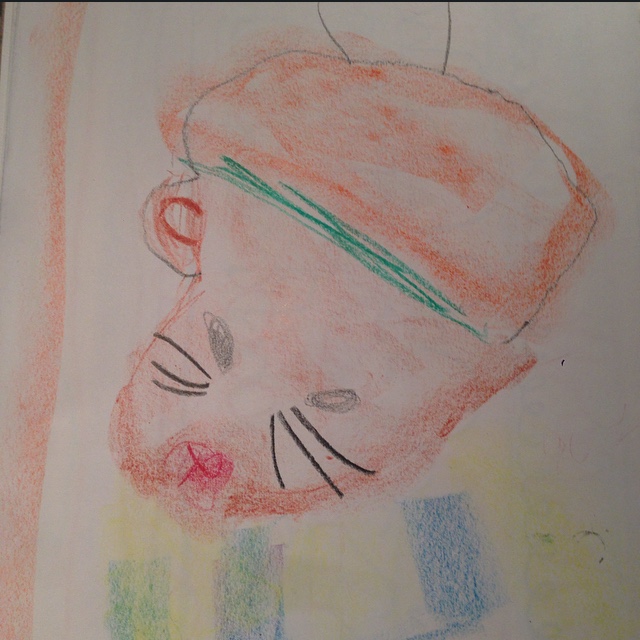 By drawing the head, she simplified the picture and was able to focus her attention on these details instead of getting overwhelmed with the entire figure.

By breaking down drawings, reminding them that it takes practice, and giving them lots of time to both copy drawings and to come up with their own interpretations, drawing animals has become a fun activity in our house for everyone (and not just for the boy who draws lemurs and sloths all day).

A challenge for you…pick one of these activities and go for it:

2) Pick an online image of an animal and draw it.

3) Draw an animal from memory.

Drawing is meditative for me, especially when I just want to copy a picture.  I get lost in following the lines and exploring the relative proximities of the parts.

I’m starting a top-secret PRIVATE Facebook group called “Life Explorers Project” where we can share  explorations, experiments, creations, destructions, etc. – if you want in, send me a message on Facebook and I will send you an invite! Right now it’s a party of 2 on there…thanks Ever-Patient for being the first member!

Come and play! I’d love to hear about your discoveries and insights about this first week!