Tonight is a big night for you.  Yes, you’re probably nodding your head in that smart-ass teenage way like you know this already.  You will be in a high school fashion show and you are nervous.  Well, Miss Know-It-All, that’s not what I mean when I say “big night.”  It’s bigger than you can possibly know.

Tonight you will be introduced to a boy.  You’ll think he’s quite cute and he will charm the pants off you with his smooth talking.  You will engage in playful banter, quickly running through your limited repertoire of witty conversation starters because it’s just not your strength – yet.  Then it will be a little awkward and you will want to crawl into a hole.  But too late, you will be smitten.

In the coming weeks, you will see this boy in the hallways at school and in your own smooth way, you will run in the opposite direction.  You remind yourself of your awkwardness and your place on the high school totem pole.  He can be found significantly higher up – you really can’t see how far up because you are that low on it.  No one knows your name.  EVERYONE knows his.

But then the unthinkable happens, at least to you, he seeks you out and talks to you.  As you are reading this, this story may seem far-fetched and a sorry attempt at boosting your confidence for tonight’s performance.  Trust me, sweetheart, he will be into you.  You may be smitten with him but you will “have him” – as you are later told – during the first conversation that you have on the phone.  In this first phone conversation, you will leave awkward behind as you decide for yourself to talk about the thing that interested you most at the time  – Michael Jordan and the Chicago Bulls.  You had taped every game that season and knew the stats of every player.  You recounted specific games that left you breathless and on the edge of your seat.  To your surprise, he shared in your enthusiasm and for the next three hours, you talked about this team and the game of basketball.

Tonight you will be introduced to this boy.  This boy.  You’re thinking, “You need to go back in time and give me this letter for that?  That’s a big event?  What’s so important about this boy?”  Well, smarty-pants, this boy will turn into a man.  This man will marry you and you will have children together.  Lots of them.

Hold on, take a breath.  I’m getting a little ahead of myself.  There’s a lot that happens before then, especially before this boy turns into a man and you, a woman.

As John Steinbeck once wrote to his son in a letter giving him advice on love, he mentions two types of love:

There are several kinds of love. One is a selfish, mean, grasping, egotistical thing which uses love for self-importance. This is the ugly and crippling kind. The other is an outpouring of everything good in you — of kindness and consideration and respect — not only the social respect of manners but the greater respect which is recognition of another person as unique and valuable. The first kind can make you sick and small and weak but the second can release in you strength, and courage and goodness and even wisdom you didn’t know you had.

Well, little girl, guess which type of love you will show him for the first four years together?  The years I like to call: The Lost Years.  I was lost.  He was lost.  You were lost in each other, and together, you lost your own selves.   You were that “selfish, mean, grasping, egotistical thing.”  Your insecurities caught up with you and you held him tight, completely smothering and suffocating.  You consumed him and he consumed you – you both once sparked a flame of innocent and pure infatuation but sucked out all the air in the bubble you created and that spark was extinguished.  Looking back now, I don’t know why both of us continued to cling to each other.  Hurting each other over and over again was better than giving up.  Giving up meant failure and I never failed.   I didn’t want to admit that we weren’t “in love.”  But we weren’t.  We stayed together out of fear.  I was afraid of letting go.  Letting go would make me fall into that scary void of loneliness.   Letting go would mean that I would eventually have to figure out who I am on my own.

In The Lost Years, we sustained many casualties.  We lost friends because we were so dependent on one another.  We stopped doing things that we loved because it inconvenienced the other person.  Our families rarely saw us.  We were young and didn’t know better.  We didn’t know that there was time to be separate and time to find ourselves again independent of this person we have come to rely on for too much.

There was something missing in those years.  There was this “love” that I found myself falling into – a wild and reckless type that took no prisoners and left everything and everyone in my path destroyed.  I said plenty of “I love you’s” during The Lost Years.  Back then, it was more like “I love you, but…,” “I love you except…,” and “I love you more when…”  We didn’t walk down the path of life together side by side.  It was a race to see who would climb the mountain first even if it meant stepping over each other sometimes and using every manipulative maneuver to get the other to keep climbing, sometimes dragging the other by the hair, instead of jumping off the path entirely.

Don’t be scared, young one.  It gets better. Keep reading.

I eventually let go.  I let go because I wanted to love someone else first: myself.  It’s hard to love someone when you don’t really know how to love yourself.  Nearing the end of The Lost Years, I became pregnant with our first child.  During that pregnancy, we both re-evaluated everything.  I had nine months to figure out who I was before I brought this child into the fray.  I needed to be okay with who I had become and make clear to myself the type of person I was growing into so my heart could be free to give away again.

But I never did give it away again.  My heart swelled in size with the birth of our eldest (just as it did with each birth).  This boy quickly grew into a man and did his own searching within.  The next two years, The Years of the Unveiling, the time we spent together and apart before we ended up getting married, we redefined ourselves in relation to each other, to our child, and to our own identities.  I kept my heart to myself and just let everyone in.

We redefined the notion of LOVE and what it means TO LOVE.

Diane Ackerman in A History of Love describes the state of love:

But what dream state is love? Frantic and serene, vigilant and calm, wrung-out and fortified, explosive and sedate — love commands a vast army of moods. Hoping for victory, limping from the latest skirmish, lovers enter the arena once again. Sitting still, we are as daring as gladiators.

After we got married, we still had days of the frantic, the vigilant, and the explosive, wanting to call it quits more times than I can count.  But it wasn’t the same selfish love that made me want to give up.  Bad habits are hard to break.  Living with someone takes work.  We were figuring out this new type of love together – a love built on trust and friendship.

And in almost every regard, friendship delivers what love promises but fails to provide. The contrast between the two are, in fact, many, and largely damning to love’s reputation. Where love is swift, for example, friendship is slow. Love comes quickly, as the song has it, but friendship ripens with time. If love is at its most perfect in its infancy, friendship is most treasured as the years go by.

For the first time, in 2000, the year we were married, I bared myself completely.  I trusted completely.  I was as vulnerable as a newborn seeing light for the first time.  And we have been married for almost 14 years now with 5 wonderful children living a life that I never imagined I would live or deserve during The Lost Years.  And I can say that we are best friends.

I write all this to tell you because I want you to know how tricky a thing love can be.  A deep love of a lifetime doesn’t begin on Day 1 or Day 3061.  It doesn’t strike you like a bolt of lightning.  It doesn’t look the same from day to day. Love morphs and there are times when you spend looking into each other’s eyes and there are times when you look ahead together.  There are days when love requires space.  Sometimes it can be found in the big moments like during a birth of a child, but it is mostly found in the small ones.  The “check-in” conversation when all the kids are asleep.  The recognition of the slightest change in tone of voice, indicating stress, and the resulting tension-relieving back rub.  The peace offerings that come faster after a disagreement.  The unexpected coffee bought in the late afternoon.  The quiet acknowledgement of how we each contribute to our household.  The hand on the small of the back as you pass each other in the kitchen.  The simple fact that we know what each other is thinking before we can even formulate the words.  The brute honesty that comes with the phrase, “I don’t like you right now.”  But there is still love.  I am full of it when he comes home from a business trip and takes over, saying one word that leaves me in tears of relief, “Rest.”

This is a love built over time and a love that wouldn’t exist if it weren’t for those years of loving completely wrong.   It is now a love that Steinbeck refers to as “an outpouring of everything good in you — of kindness and consideration and respect — not only the social respect of manners but the greater respect which is recognition of another person as unique and valuable.”

Remember, you both aren’t alone.  Diane Ackerman so eloquently writes:

Love is an ancient delirium, a desire older than civilization, with taproots stretching deep into dark and mysterious days….

It’s tempting to think of love as a progression, from ignorance toward the refined light of reason, but that would be a mistake. The history of love is not a ladder we climb rung by rung leaving previous rungs below. Human history is not a journey across a landscape, in the course of which we leave one town behind as we approach another. Nomads constantly on the move, we carry everything with us, all we possess. We carry the seeds and nails and remembered hardships of everywhere we have lived, the beliefs and hurts and bones of every ancestor. Our baggage is heavy. We can’t bear to part with anything that ever made us human. The way we love in the twentieth century is as much an accumulation of past sentiments as a response to modern life.

This is a journey which all of human civilization endures and yours is just beginning.

Oh and one more thing.  In a couple of years, you will be blond. 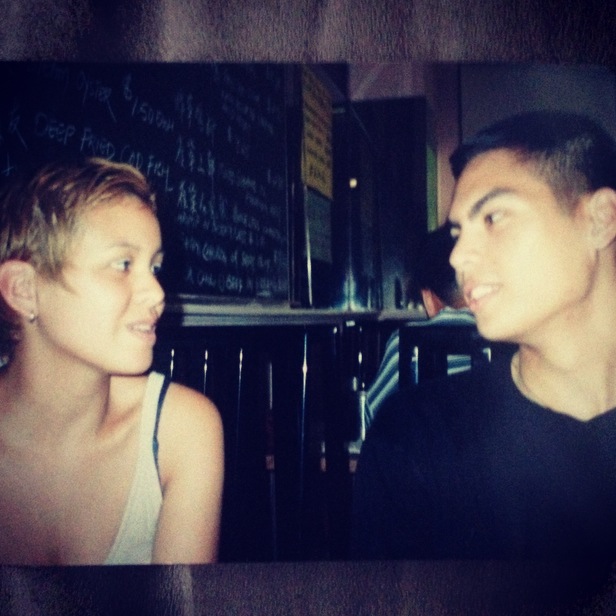