back to school. part two.

And in my last post, when I said I will post more “tomorrow,” I really meant in a few days.

You know how I roll.

But…I have actually installed a widget-thing to help you follow me.   There is a new field on the right hand side there to enter your email address to receive new posts in your email.  Sorry for the wait with that.  Then you don’t have to try to decipher what “tomorrow” means.

So back to the first week of school…

We spent all of last week with stories and form drawing.  (For more info on what form drawing is, read this article.)

I started with a week of forms to identify where the children were at developmentally.  I know it’s sounds very voodoo and country fair psychic crap like reading tea leaves, but it’s not.  I really can tell what they are ready to tackle and what they still need to learn or master. Form drawing is also a way to prepare them and warm them up, so to speak, for their upcoming main lesson blocks.

These were some of #3′s forms… 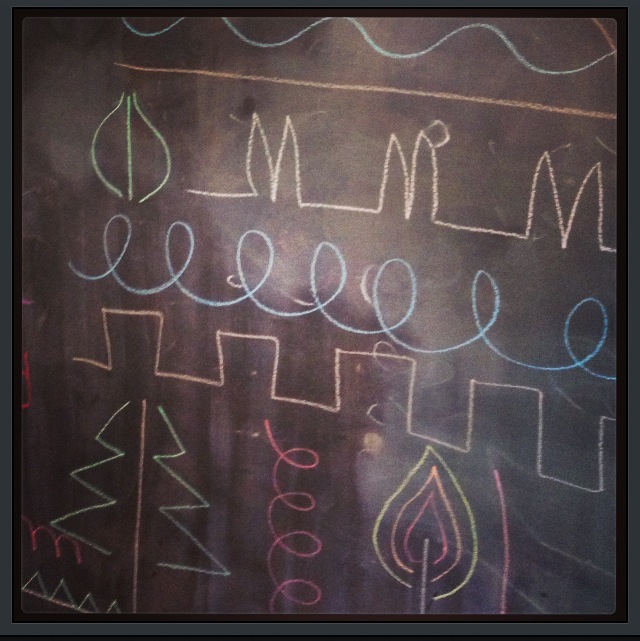 I loved the idea of using First Nation stories to use as jumping off points for form drawing.  Teri, atHomeschooling Waldorf who has the most organized blog ever (can you hear the blog-envy just a little?), used a wonderful book by Jane Louise Curry called:

Hold Up the Sky: And Other Native American Tales from Texas and the Southern Plains

I wanted to use stories that were more in context with the First Nations peoples relative to our own local geography so we used this book by Jane Louise Curry: 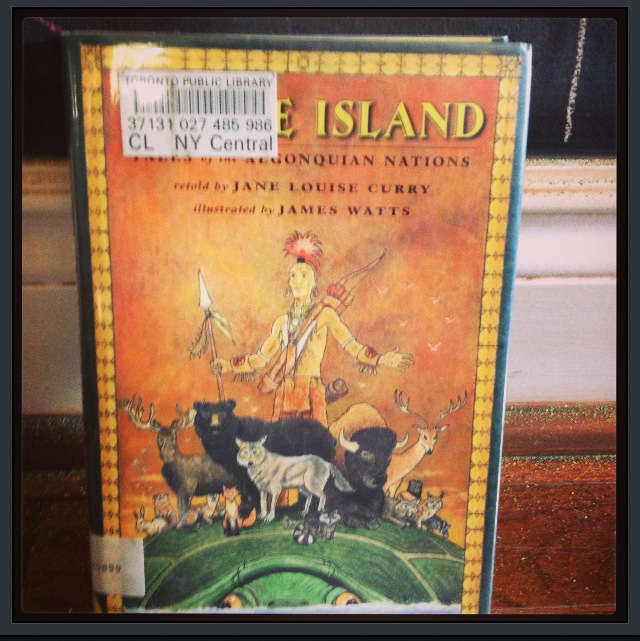 They were lovely stories and my #3 retold them over and over again.  They helped her imagine the movement of the forms through the way the characters or objects moved in the stories: the way rainbow crow swooped down, the way the buffalo raced man, and the way Manabush turned into a tree to defeat the monsters of the lake.  She lived the forms through those stories and I noticed a huge difference in focus from the beginning to the end of the week.

I made up all of the forms and used both running and symmetry forms.  I told the story and as I told it, I drew the forms on the board.  Afterward, she re-told the story to herself as she re-created the forms in her main lesson book.  If she didn’t feel confident drawing a particular one, she would practice on the chalkboard until she had the feeling for it.

#1 and #2 tried drawing the “perfect circle.”  We also talked about the circle as the basis for all other shapes – #2 will be starting geometry this year and for #1, I am setting the stage for calculus.  For my oldest, who was in school the longest, math was taught as a very concrete and distinct subject where the focus was on quantities and not the qualities of the numbers.  I want to show them how beautiful and precise the universe is and for them to become aware that the workings of nature and the universe itself has its own language – mathematics.  There is a spiritual quality that permeates number patterns and especially in geometry that if recognized, can change the way learning math can be experienced.  In 1611, Galileo wrote:

Philosophy is written in this grand book – I mean the universe – which stands continually open to our gaze, but it cannot be understood unless one first learns to comprehend the language and interpret the characters in which it is written.  It is written in the language of mathematics, and its characters are triangles, circles, and other geometrical figures, without which it is humanly impossible to understand a single word of it; without these, one is wandering about in a dark labyrinth.

I found this quote in A Beginner’s Guide to Constructing the Universe: Mathematical Archetypes of Nature, Art, and Science.  I am probably going to buy this book although it’s available at the library.  #1 is reading it as an almost historical and philosophical background to the subject of math.  There are great quotes and diagrams as each number’s qualities are discussed.  I will also reference this book when I begin #2′s geometry block.  Another form they drew this week were concentric circles – from in to out and then from out to in.  After they copied the following poem excerpt and quote into their poetry books to help them understands the relation of drawing these circles to nature.

As on the smooth expanse of crystal lakes,

The sinking stone at first a circle makes;

The trembling surface by the motion stirr’d,

Spread in a second circle, then a third;

Fill all the wat’ry plain, and to the margin dance.

The wave is not the water.  The water merely told us about the wave moving by. – Bucky Fuller – one of my favourite thinkers/doers of the 20th century.

#4 excitedly began her week as I introduced her to two very important and archetypal forms: the straight line and curve.  Of course, I told a story.  I told her the story of “The Meeting of the Animals” found in a book by David Adams called One, Two, Three. (It’s a free ebook..click the link!).  I embellished the story a bit going into a little more detail than the story that is written to allow for a telling in two parts.  After I told the stories, we focused on the straight line.  We walked it, our bodies became it, and then she went exploring outside for straight line objects.  She identified things around the house and traced them with her finger from top to bottom and then she was ready to draw one on the board.  Then we played with different line drawings in her main lesson book: 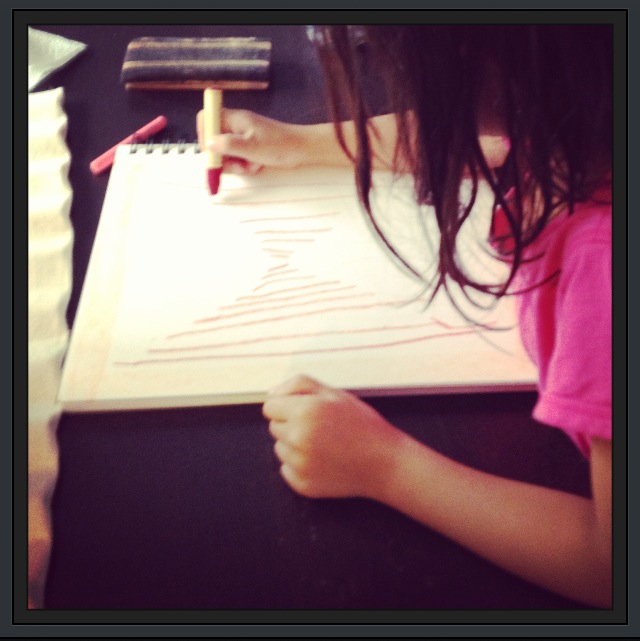 For the next lesson, I told the rest of the story and we focused on the curve line.  Again, we fully felt the curve and found samples of it and then finally we drew it.  And then the next lesson, I re-told the entire story and we moved like the animals in the story, mimicking straight or curvy running forms across the room (with #5 quickly joining in as he watched us having fun hopping like bunnies and slithering like snakes).  Then she modelled some curve and line shapes with beeswax and used her plasticine to make a picture on wax paper full of things with curved and straight lines – a tree, the sun, a snail, etc. 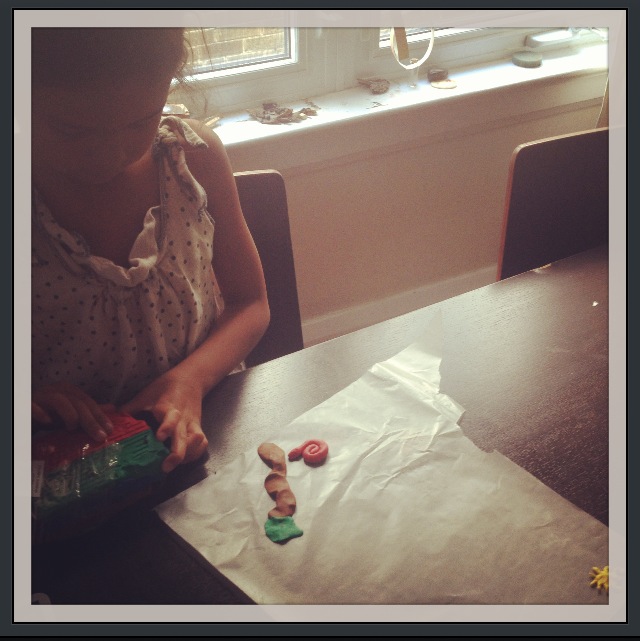 On our last lesson day that week, we took out the Yoga Pretzels (Yoga Cards) and we took turns picking cards and figured out if our bodies were going to make very straight or very curved forms (again, #5 was all over this). 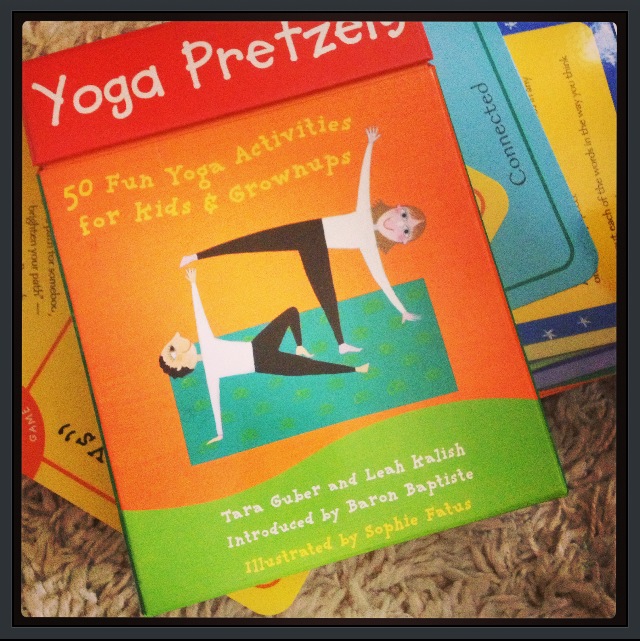 Here she is doing the bridge card…though she is modifying it to make it a little harder for herself: 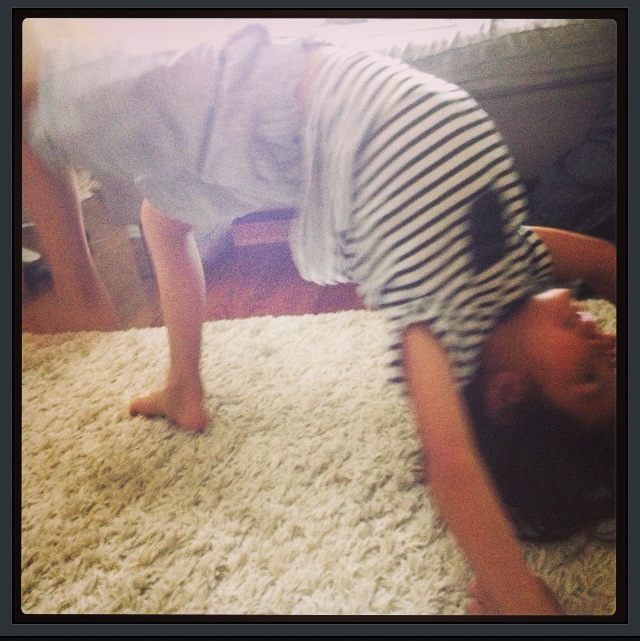 Me, exhausted already, just did a nice and easy pelvic tilt up…with of course #5 sitting on top of me.

Finally, #4 attempted some running forms in her main lesson book: 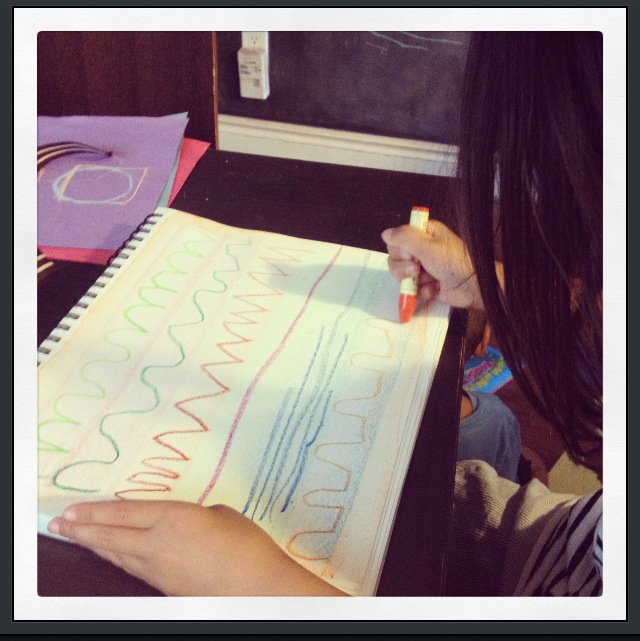 We also had a wonderful beach day where the kids explored more forms in the sand. 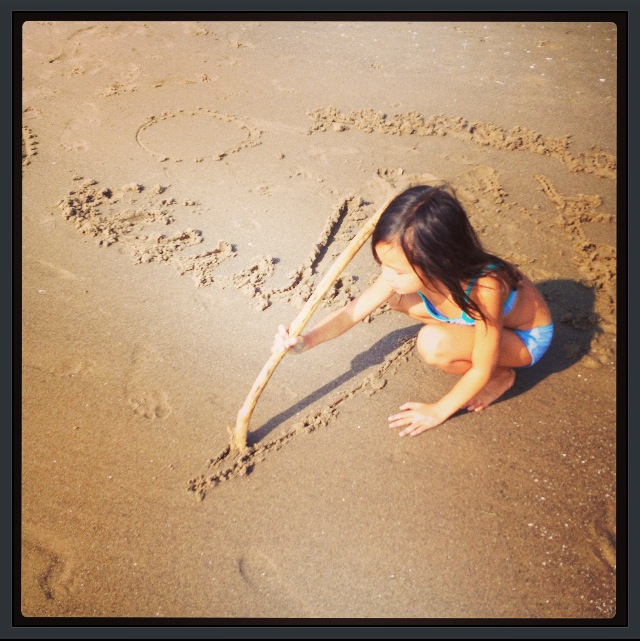 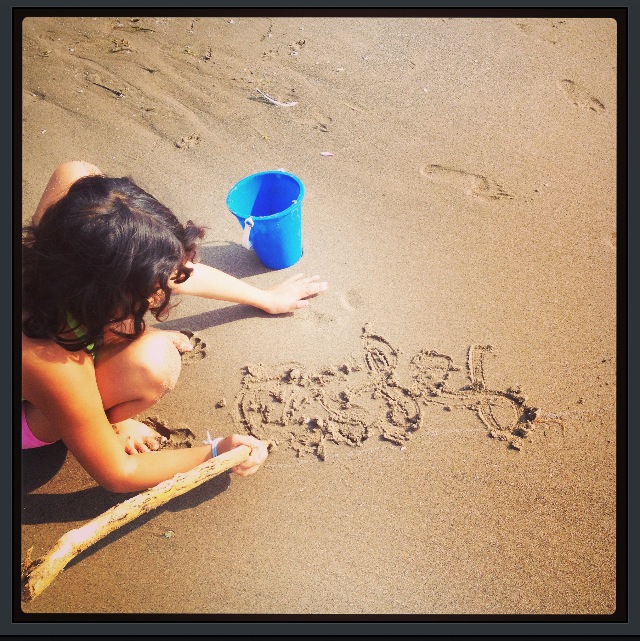 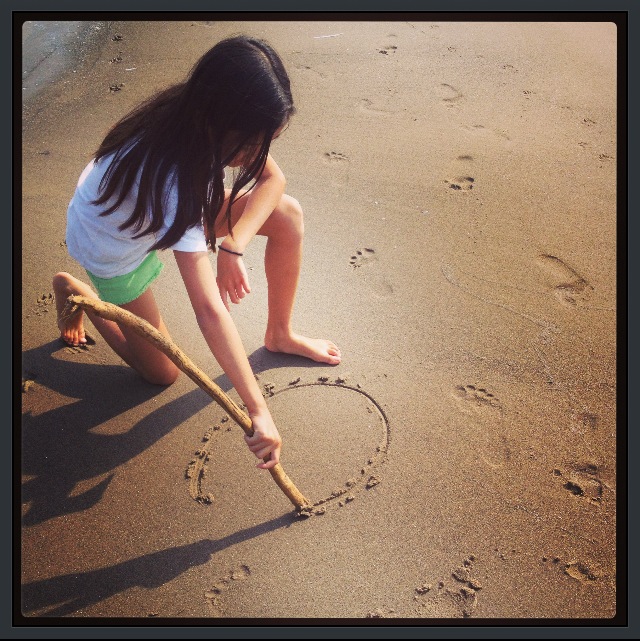 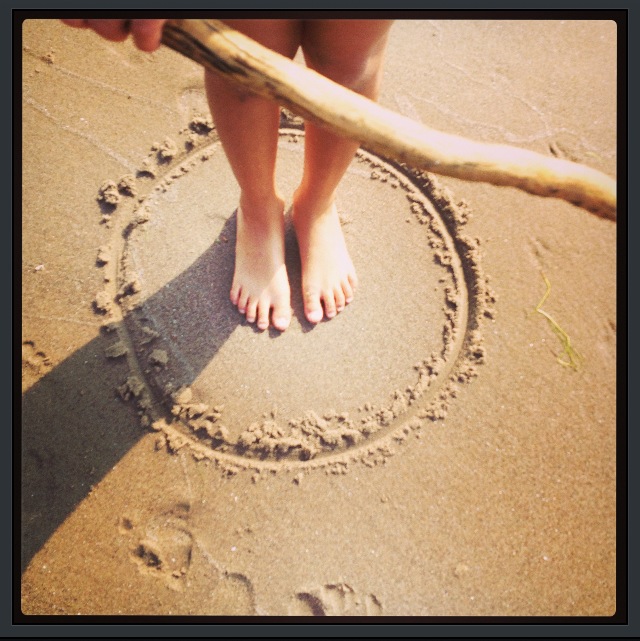 And what about #5?  He enjoyed a week of circle time with lively apple songs using our yarn apples: 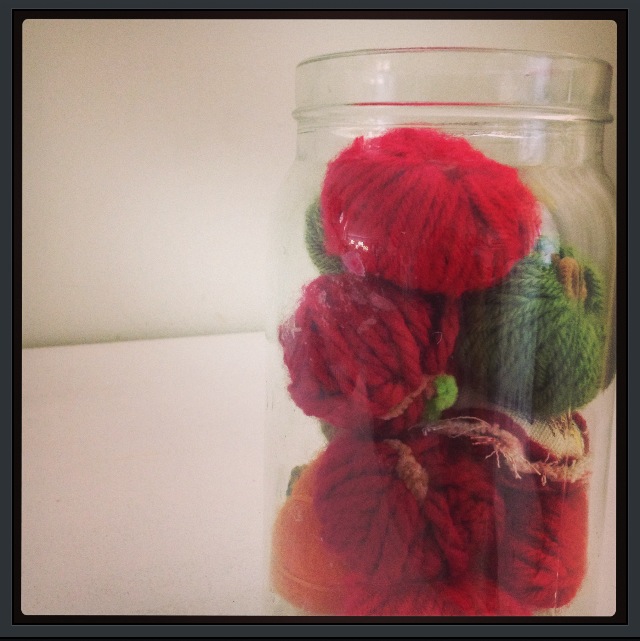 And listened to stories read by big sisters: 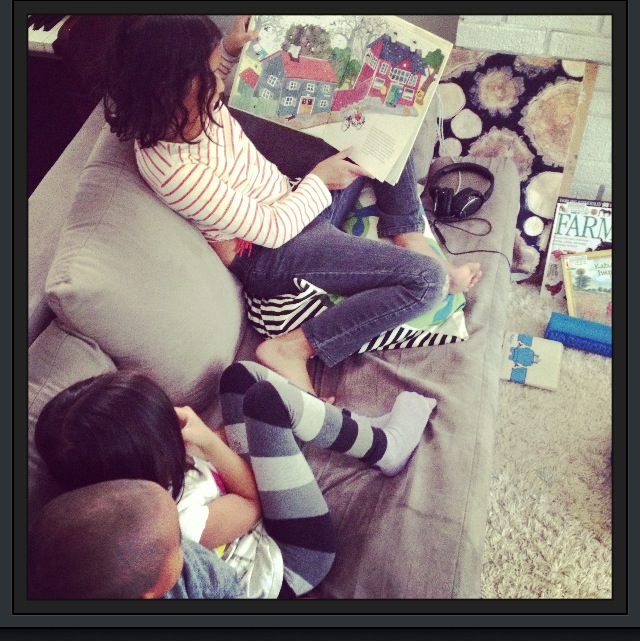 And he made stuff and more stuff.  He scootered back and forth on the main floor.  He helped bake muffins.  He sneaked chocolate chips out of the pantry.  He “accidentally” erased chalkboard form drawings.  He played with lego.  He hid all the yarn apples so when it came time to circle, he laughed hysterically when I discovered the empty jar of apples.

#2 also finished up a little geography of the east coast which I had planned to do in the summer after our trip to New Brunswick but then we were in full fledged summer mode so that wasn’t going to happen.  I’m glad I left it until now because she was able to reference a lot from our trip as she mapped out Ontario, Quebec, and the Maritimes.  She also finished reading Paddle-to-the-Sea which was a perfect cap-off to the geography review week. 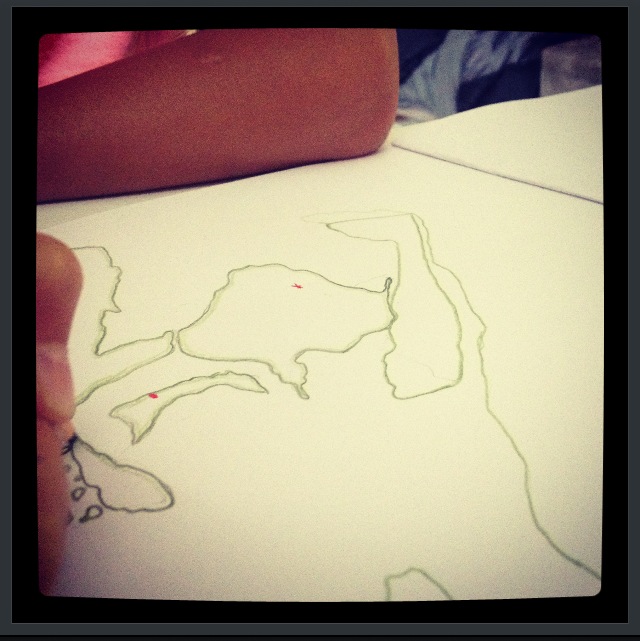 And that was our first week of school…there was some math review and lots of reading too.

I hope to organize my blog categories by grade and block but that’s not looking likely right now as we are in full school mode.  I was able to blog today because I finished the kids’ chalkboard drawings this morning faster than usual AND I’m already familiar with the stories I am telling today so there is no last-minute memorizing this morning.  No new breakfast needs to be cooked because we have leftover oatmeal from yesterday’s meal.  There are 2 laundry loads calling my name though…

Now if I can keep this pace up until next June…

3 responses to “back to school. part two.”