: a scientific test in which you perform a series of actions and carefully observe their effects in order to learn about something

: to do a scientific test in which you perform a series of actions and carefully observe their effects

: to try a new activity or a new way of doing or thinking about something

First of all, there is nothing scientific about any of the experiments that I have conducted, intentionally and unintentionally, in my life.  There were no pre-written hypotheses or well-documented inferences. There were no graphs depicting trends or probability ratios. There were only conclusions drawn, sometimes against my will, and failures or successes – terms I have ditched which I will explain later –  to evaluate.

My field notes consisted of journals upon journals describing the day-to-day grind.  These contained crude observations about the past and present and rhetorical questions about the future.

I can divide up my sets of experiments into different series:

Series 1. The Crash-and-Burn Experiments: Deep down you know that these experiments are going to end badly.  There is no way that there will not be an explosion in your face or the outcome will result in mass destruction. You decide to experiment with a new persona that feels so against who you are.  You refuse to leave a situation out of sheer pride thinking tomorrow it will get better when you know that it really won’t.  Those are experiments that the people closest to you try to warn you about or run the other way in fear of being blasted to bits by your careless trials with certain error following.  They scream from the safety of a contained unit:  Abandon ship!..or at least put on your safety goggles!

Series 2. My version of the Marshmallow Experiment: This experiment almost succeeded in steering me away from what I deem the essential pieces to my life.  I craved instant gratification – immediate success at any cost.  I was eating that marshmallow asap.

Series 3. The Blame Game: How many people and for how long could I blame others for wrongs done to me in the past?  Was it possible to dwell in blame and not self-destruct or repeat patterns? Unfortunately, I had to undergo these experiments over and over again until I realized that at some point, I needed to take some accountability for my own actions and let the rest go.

Series 4.  Following of the Bliss: What if I could design my life according to what I held most important? What is important to me? What if I wasn’t bound to some pre-ordained expectation or to convention? What if we took the leap and actually created a simpler life? What would that look like? Where would that lead?

I am still conducting my Series 4 experiments. It’s just getting more and more interesting as the variables change – the increase in the number of people involved, emerging personalities, and the re-definition of what is essential.

During Series 1-3 experiments, I felt like failure.  These tests and trials took me far from where I had started.  The aftermath pushed me to investigate what went wrong and analyze how to do things differently.  I am very good at recognizing when I am in a rut – repeating a pattern of behaviour that is only causing suffering to myself and to those around me – but getting out of one or avoiding stepping into one was another story all together.

Years later I see those Series 1-3 experiments in a new light.

In Creativity Inc.: Overcoming the Unseen Forces that Stand in the Way of True Inspiration, Pixar cofounder Ed Catmull writes about failure:

We need to think about failure differently. I’m not the first to say that failure, when approached properly, can be an opportunity for growth. But the way most people interpret this assertion is that mistakes are a necessary evil. Mistakes aren’t a necessary evil. They aren’t evil at all. They are an inevitable consequence of doing something new (and, as such, should be seen as valuable; without them, we’d have no originality). And yet, even as I say that embracing failure is an important part of learning, I also acknowledge that acknowledging this truth is not enough. That’s because failure is painful, and our feelings about this pain tend to screw up our understanding of its worth. To disentangle the good and the bad parts of failure, we have to recognize both the reality of the pain and the benefit of the resulting growth.

As time blurs the sharp edges of failure, I can finally see the resulting growth.  I no longer have to conduct those type of experiments to understand what I value or test the trust of those around me. I no longer see all those past experiments as painful memories of an angry and bitter young woman but have come to love them as necessary parts of my journey.

My tools for measurement have changed too.  It is no longer about the amount of money or amount of things accumulated that I use to measure success or failure.  I measure the outcome of events and choices based on how I feel and on the relative health of my relationships. In fact, the terms success and failure are substituted by one word – growth.  How have I grown? What did I learn?  Was that risk worth taking?

For example, I have shifted the way I look at teaching my children. I focus on who they are right now and what can help them on their own journey of feeling comfortable in their own skin. I experiment with different content and the way I deliver it.  Sometimes things go amazingly well and other times they blow up in my face.  My fourth child is currently in grade 2 but I have not been able to repeat anything that I did with my third child.  She responds to an entirely different teaching method and she doesn’t want to hear the same content that I presented to her sibling.  We began with animal stories this month but by this week, she had enough.  I have also had to experiment with changing up her rhythm this year.

I found this book at the library: 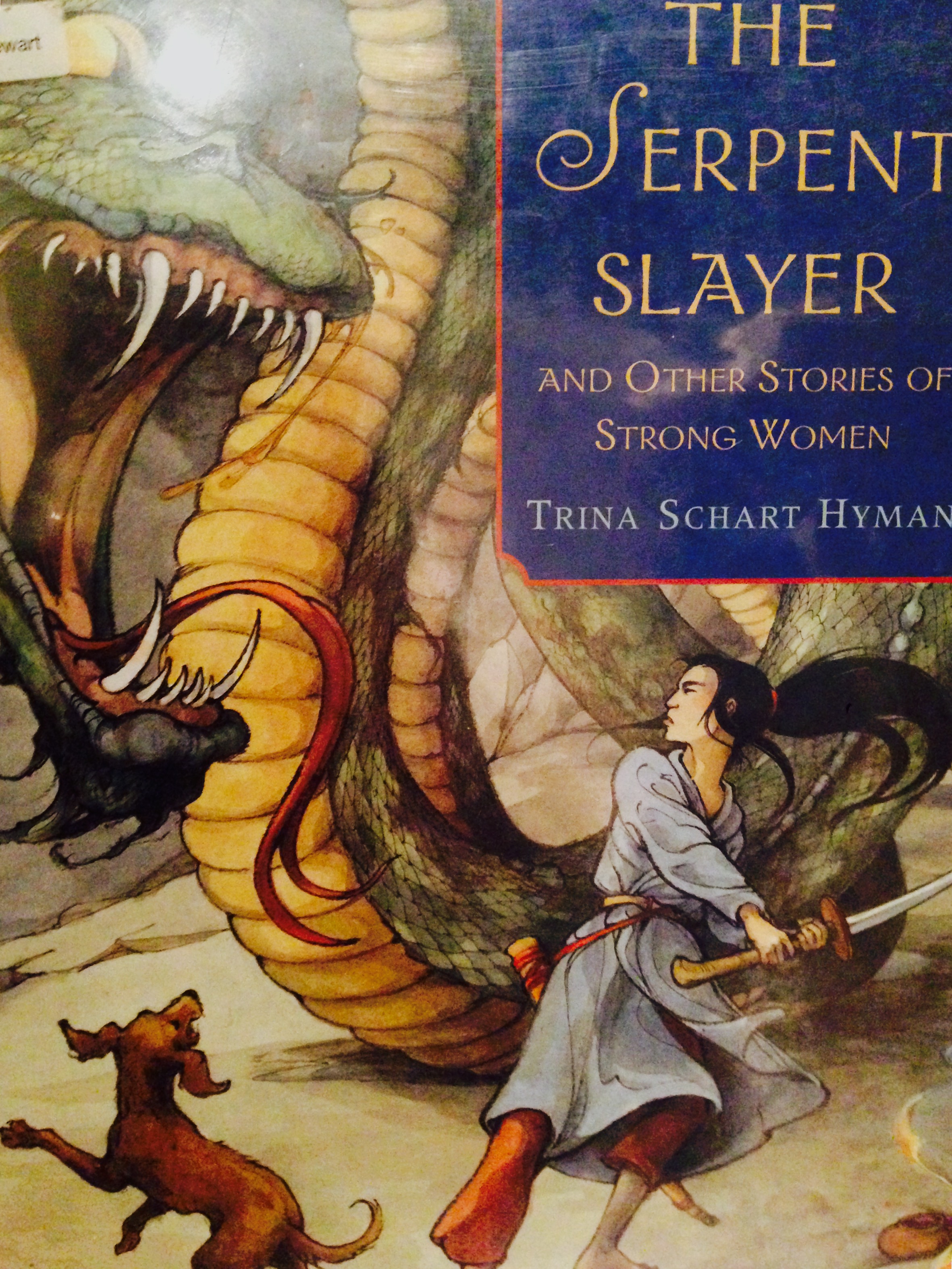 We have changed the beginning of her day.  In the morning, before breakfast, she has time alone outside, her “sit spot.”  Then she comes inside and we read a story from this book.  This book has beautiful stories from around the world that have female protagonists.  Sometimes it is a young girl or more mature woman that outwits or outmuscles a foe.  She has been excited to start her day with these stories.  I also promise to read her another one at the end of the day.  We re-tell one of them at bedtime too.  There is no other work involved with these stories.  She has her form drawing exercises and story work with her Thornton Burgess stories.  But  these strong women stories are only about working on her fiery spirit.

Now with this little experiment, if I was measuring using a success or failure system, then this would be a fail in terms of academic-focused goals.  I don’t even consider a change in behaviour or attitude a success or failure – only a form of growth.  These stories are acting upon her inner life.  Her soul.  These stories are almost familiar to her and give her comfort. They are great intro to her saints and legends block that I will be starting next week.

Exercising and training over the last five years have been a huge experiment. By shifting my purpose and focus of training, I have experienced growth in strength and acceptance of my changing body. I have learned to listen to my body through these experiments. I have observed and documented the changes in energy and mental health over the last five years.  Maybe I never did end up losing those “last 10” that I was obsessed with ten years ago but I gained so many other benefits that will last me for the rest of my life.  It has been a slow progression of increasing my strength – the core of my training – which you can read about in my training journal.

I love experiments.  It’s a way to get excited about life – a way to break up the routine and the expected.  It shakes things up.  My favourite part is the evaluation.  I love looking back and rediscovering my initial purpose for the experiment.  I normally learn something entirely unexpected and unrelated to the initial purpose.  For example, I knew homeschooling was going to test me.  It was going to test my patience and my confidence.  It was going to test my will and my trust in myself and in my children.  My goal is to have them comfortable with who they are. I had no idea that this homeschooling experiment would lead me to become more comfortable with who I am through connecting with others in my community. It would test my comfort zones and push me to invest in friendships on a deeper level than I ever thought I was capable.

Here is a challenge for you:

Make a list of all your experiments – past and ongoing.  Make observations.  Make conclusions.  Develop your own tools for measurement – happiness? achievement? peace? money? adventure? a good night’s sleep?

Do you see a pattern arise?  Can you see all these trials as a step closer to who you really are?

Tomorrow: Field notes on my grandest experiment to date and plans for future experimentation…