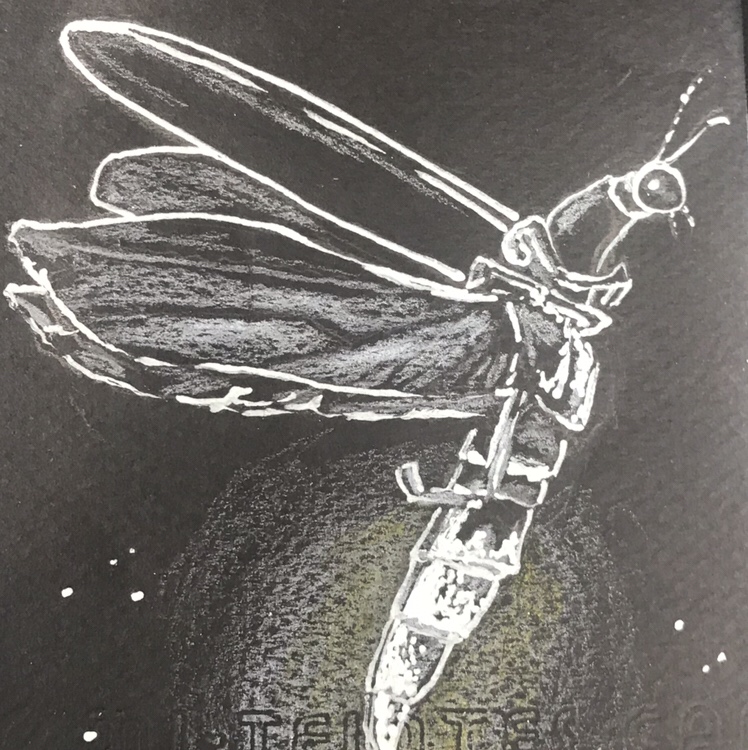 I drew this for a dear friend the other day. Fireflies show up for me in very particular ways.

The first time I saw a firefly was when I was camping with some homeschooling mamas for a weekend. Growing up as a city kid, it was my first time camping and sleeping outside. My kids were 1, 3, 5, 7, and 12. We cooked most meals over the fire and we had made marshmallows from scratch to be roasted.

When I think about that adventure, I can’t believe I did it but I know I couldn’t have done it without the support of those other crazy mamas.

When women show up for me in support and love, I see fireflies. When women encourage and believe in me past what I think I am capable of, I see an abundance of fireflies.

They appeared and illuminated my path in a barefoot jungle walk as a woman’s voice empowered me to keep going. They lit a hill when my mother and her friends took care of my family during a camping trip that immediately followed an emotional permanent departure from our Toronto home. They showed up in multitudes when I camped on the West Coast Trail with a dear friend who helped me conquer most of my limiting beliefs about what I could physically accomplish.

Whenever I am being held by other women, they appear in the darkness, wherever I am.

More recently, I have been held again by wonderful women and a firefly hovered right in front of my face a few nights ago. She flickered on and off. This little point in the darkness. This tiny little light that appears like magic between realms of the invisible and visible.

At our little homeschool coop today, I was grateful for the women holding the space for all of our children and each other as we sat in circle – a gentle container of support as we navigate what homeschooling means to each family.

One night, shortly after we moved onto our land in January, my kids and I had a story circle.

First, this story told me a lot about how my children were feeling moving into the jungle without electricity. But that is a story for another day.

Second, I finally made the connection of the support of women and fireflies.

I have never seen only one firefly. They are always dancing together, rhythmically creating a play of shadows in the forest or the jungle.

Each one does not have to act like a fluorescent bulb, shining a blinding luminescence without pause. Each one is an unassuming little bug. Now I see how the magic lies in the pauses of light. The pauses are the anticipatory surprises of where she will show up next.

When other women shine their light in full support of each other, I can dim, take a breath, and fall into the darkness trusting that they will light my way giving me both the courage to reignite when I am able and to illuminate paths I never knew existed.

To all the women who have loved and supported me over and over again or even for a brief moment in time, thank you.