It’s a been awhile posting about what we are doing day-to-day .

I thought I’d share an activity we did last week during #2′s wrap-up of Ancient India.

If you recall from a back to school post, #2′s theme this year is the circle.  I try to come back to it in each block as a recurring theme in a subversive way.  For example, I don’t turn all game-show host-like and say, “And now for the ‘circle’ portion of our show…”  I incorporate the theme in subtle ways so that her subconscious may put it all together at a later date – maybe months, maybe years from now.  It looks like I’m taking a bit of a gamble but let’s look at it more like a leap of faith.

I was excited to cover Ancient India and the dream-like consciousness the people had.  The concepts of illusion and karma were introduced through story and myth.  We drew the trinity – Brahma, Vishnu, and Shiva – and talked about the characteristics of creation, preservation, and destruction and the need for the existence of all three as we walked in the woods and looked around at the decay during this time of year.  The idea of a caste system was confusing and slightly repulsive to her but we explored the ramifications and ethical dilemmas associated with it, again through story and discussions afterward.

With all this interesting stuff going on, you’d think she was excited to explore this civilization.  No, not really.

She loved the stories but just couldn’t wrap her head around the concept of dharma and believing that all around us, maya, was not real.  She often had a confused look on her face every time I mentioned Brahman.  I refrained from explaining away and just kept telling stories and let go the summarizing that needed to be done.

Then one day I remembered the whole “circle” theme.  Yes, I implied it with the stories about the trinity of Hindu gods but maybe I needed to get a little more in-your-face and also inject more art in this block.

She copied this quote in her poetry book at the beginning of the year:

THE EYE is the first circle; the horizon which it forms is the second; and throughout nature this primary picture is repeated without end. It is the highest emblem in the cipher of the world.   – Ralph Waldo Emerson

According to The Mandala Project:

The word “mandala” is from the classical Indian language of Sanskrit. Loosely translated to mean “circle,” a mandala is far more than a simple shape. It represents wholeness, and can be seen as a model for the organizational structure of life itself–a cosmic diagram that reminds us of our relation to the infinite, the world that extends both beyond and within our bodies and minds.

Perfect.  My gut was telling me that this would be a perfect way to cap-off our block.  I took a deep breath, crossed my fingers, and drew this on her blackboard for her to discover in the morning: 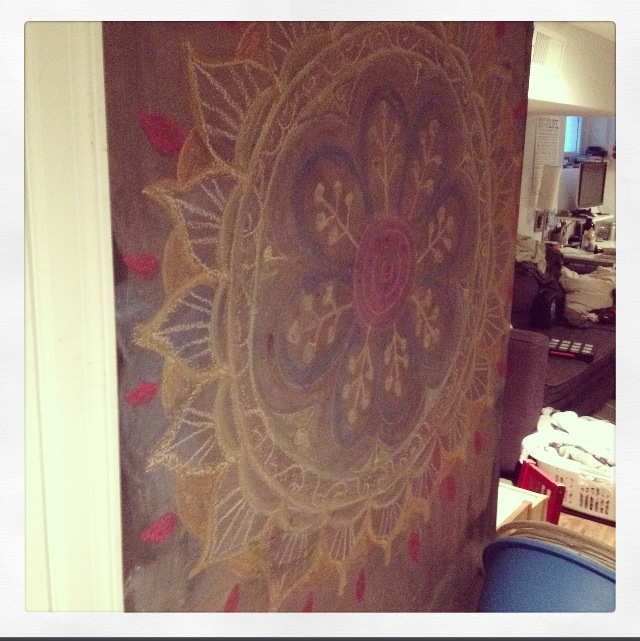 Throughout the block, she was drawing these mehndi motifs as part of her independent work: 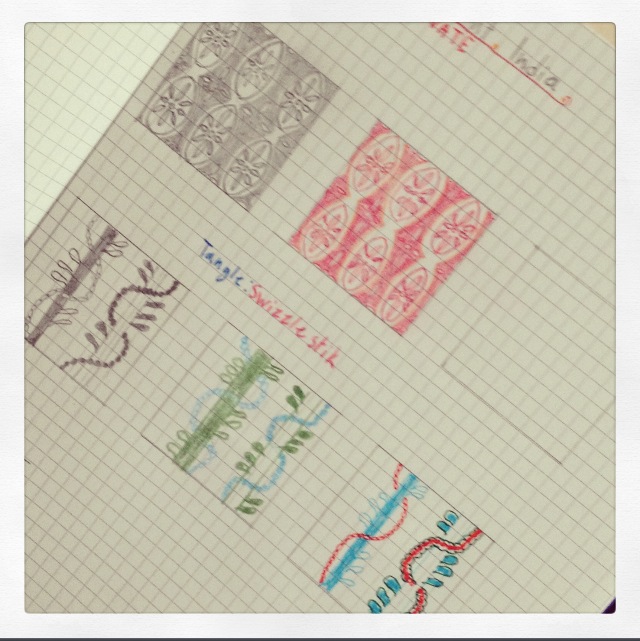 She loved it.  So I was pretty sure she would love this whole mandala business.

And I was right…

#2′s main lesson book with her first ever mandala…(I used this fun how-to-draw-a-mandela guide to get her started.) 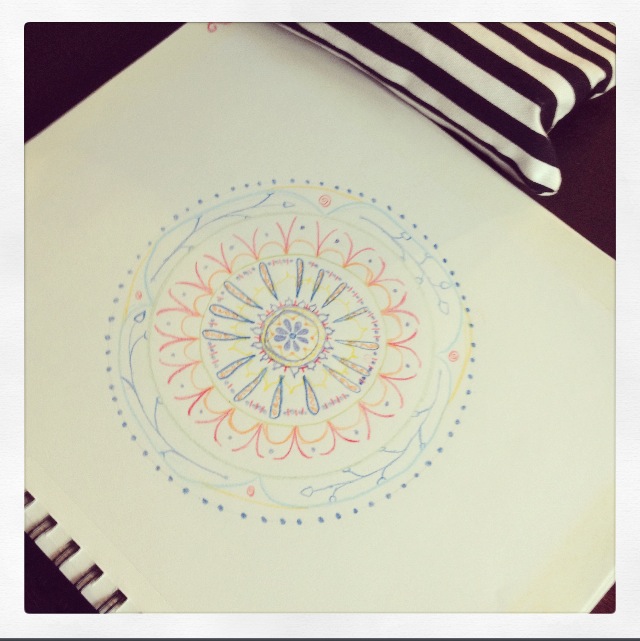 I also gave her a “Mandala Basics” page similar to this one I found on this mandala tutorial.

Once the others saw what she was up to, they wanted in on the action. For the past few days, it’s been a mandala fest in our house.  The littles, #1, and I have been mandala-crazy.

#1, #2, and I drew some on watercolour paper with watercolour pencil crayons and then used a thin brush dipped in water to give a nice blended look: 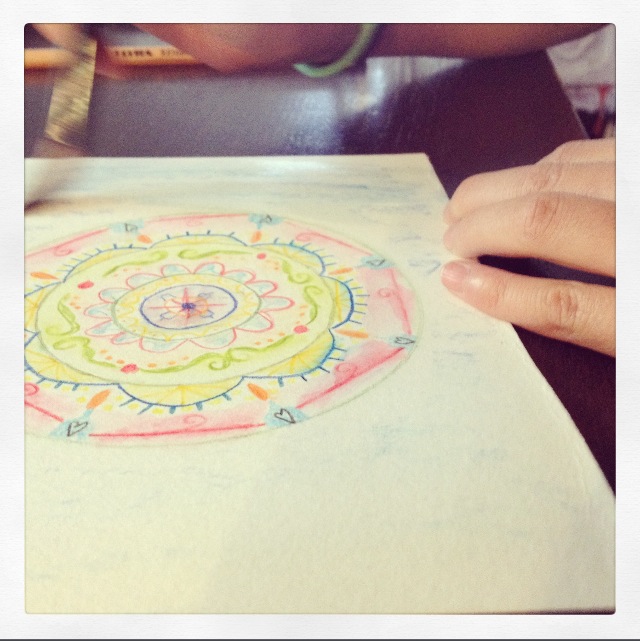 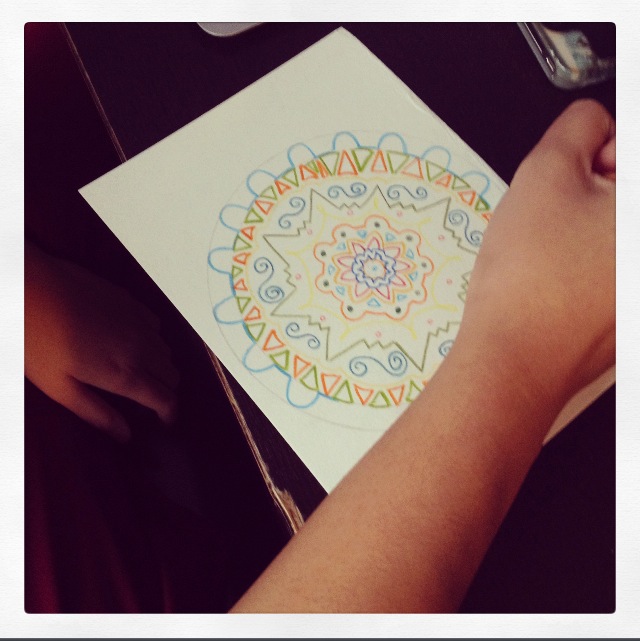 The next day we used black paper and pastels to make them: 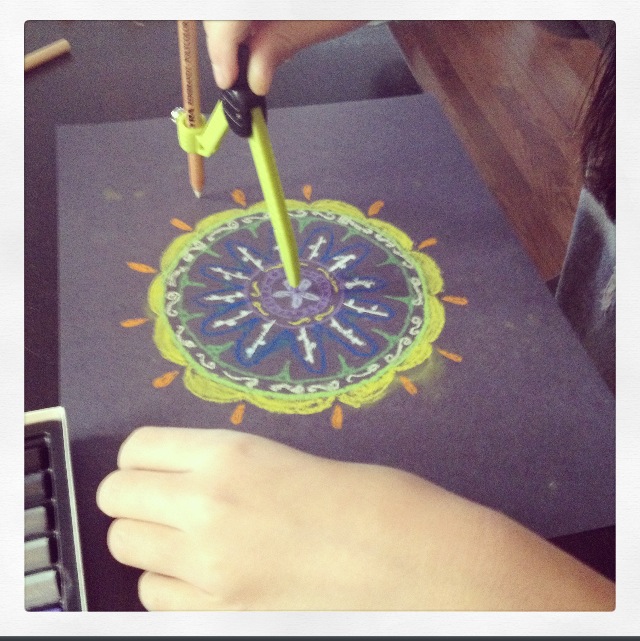 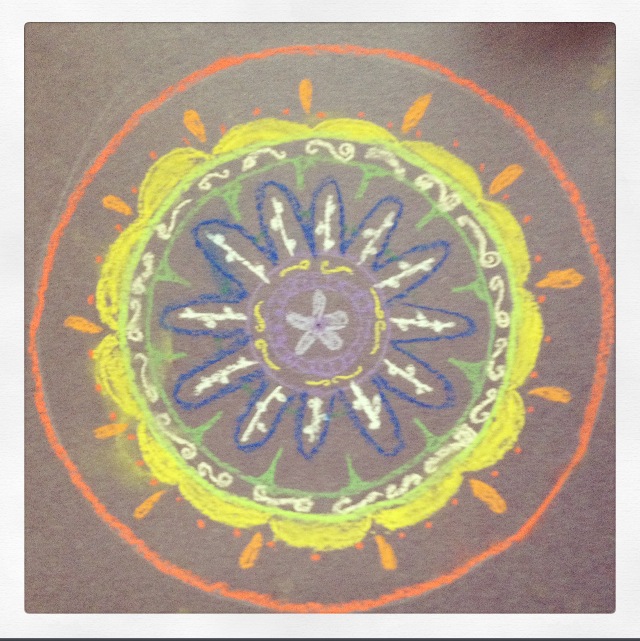 Here are the little ones making mandalas: 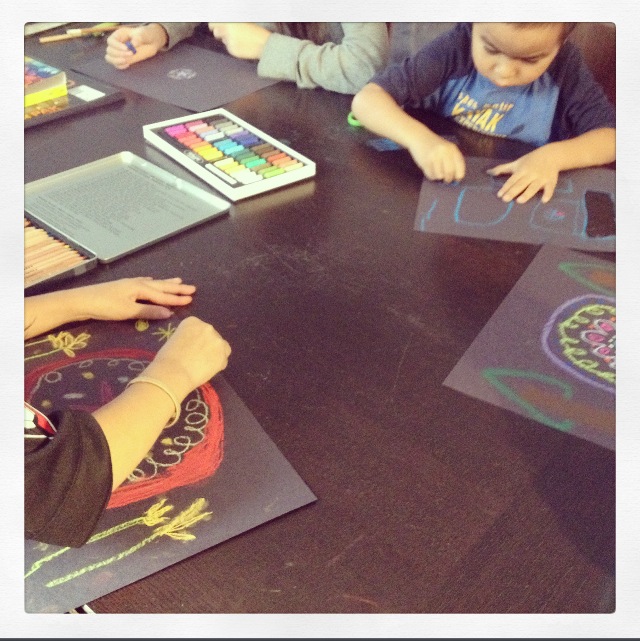 Our wall of mandala art: 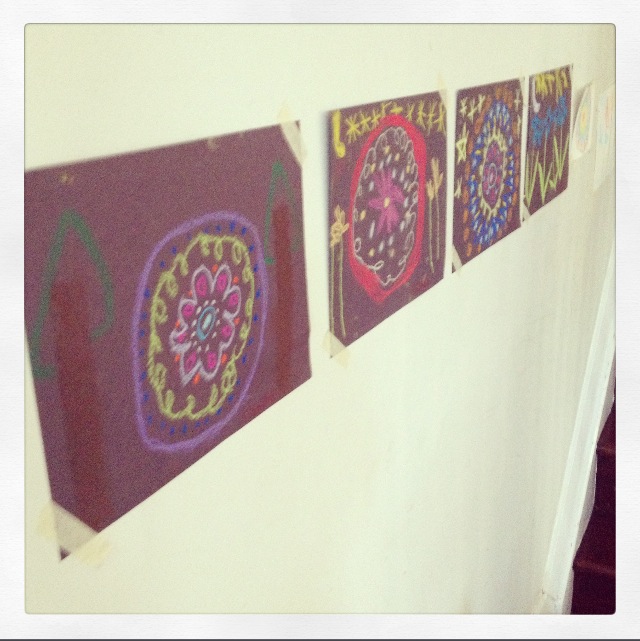 We were going to take it to the beach today and do some mandalas with natural objects but I chickened out because of the windy gusts today.  Maybe in the spring…or summer.  Yes, probably summer.  #2 is also going to create this “stitch sampler” in mandala style.

As we wrapped up Ancient India, #2 and I had the following conversation:

Me: “So, this mandala stuff was probably you’re favourite thing out of this whole Ancient India block, right?”

#2: “Yes I loved the mandalas, I could do them all day…but I also really liked Vishnu, the Preserver.”

#2: “Because without him, anything created would instantly be destroyed.  Nothing would last.  I like things to last.”

And just when I thought I completely bombed a block big time, she hits me with something like that.  I now remember who she is and where she is at in her development and how I mistook her silence and lack-lustre reactions to mean she was bored when in fact, she was slightly unnerved by the block – the fact that there are beginnings and endings over and over again, the concept of life in a constant state of birth and death…

…and how sometimes, we just want things to stay the same, even just for a moment.