It feels like we hardly know each other.  I admire you from afar as I see you emerge in others.  I, on the other hand, haven’t made your acquaintance.  We have not been intimate bedfellows or even cooperative neighbours.  Sometimes we don’t even share the same postal code.

But today I found you in the most unexpected place.

My nine year old daughter has a badly sprained ankle. 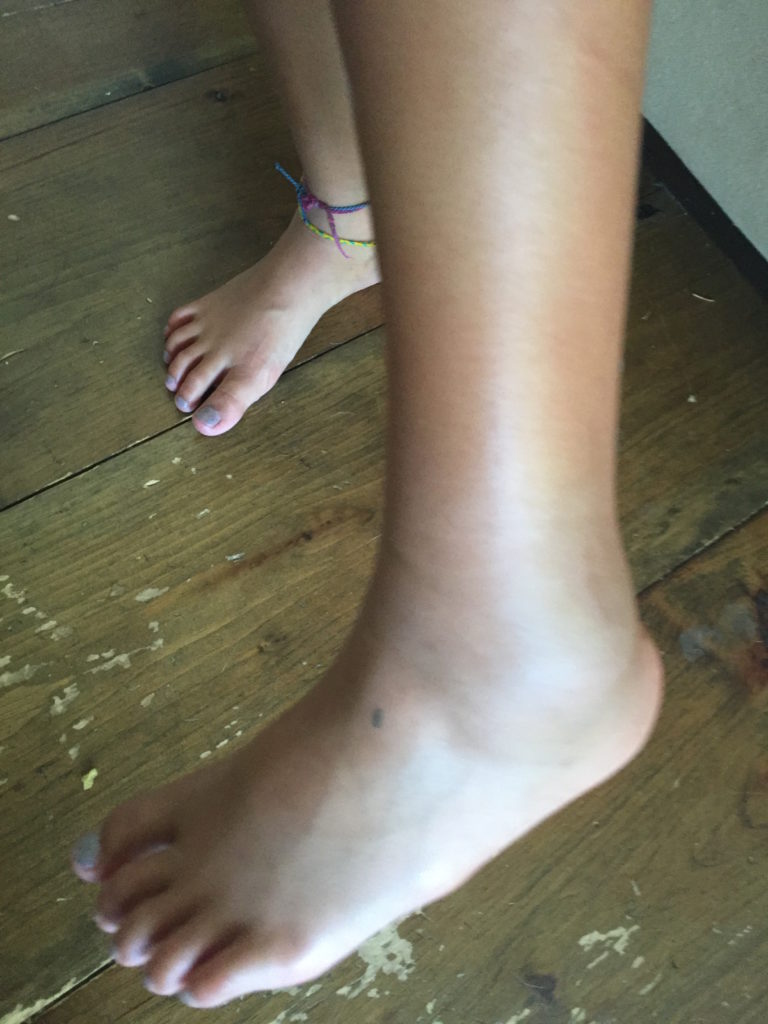 Yes the daughter who loves to move her body from the moment she wakes up to the moment she passes out after pure exhaustion late at night, the one who is practicing one-handed handstands, the one who has been playing volleyball every day for hours and hours until no one wants to partner with her anymore.  Yes that one.  When she did it, she cried in pain that is unusual for her so I knew something was wrong.  She was sidelined.  She couldn’t stand on it.  To make sure it wasn’t broken, we headed to the emergency room aka Hell on Earth.

Here is where I surrendered to the chaos of the hospital and found you.

My daughter was so angry.  She started to cry not because she was in pain, she now had a handle on that, she cried because she was pissed off.  She had to sit there in that wheelchair and wait.  She couldn’t move.  I have never seen her sit for so long.  Every time she would think about sports or an upcoming cottage weekend with friends, she became livid.  It wasn’t fair and she didn’t know what to do with her emotions.

Two days ago I wrote about her ninth birthday.  I talked about how important movement was for this child.  As she sat there in that wheelchair tearing up over not being able to do the things she loved, I couldn’t find the words to make her feel better.  She was raging and I let her.  I held her hand.  I put her bum ankle in my lap.  I didn’t try to make it better.  I channeled you instead.

A few hours passed and we sat.  We finally saw a doctor who told us it wasn’t broken and that someone would come by and wrap her ankle in a bandage and give her crutches.  An hour later and still no one.  You were quickly beginning to thin.  She was about to blow.  I was about to blow.  We both took deep breaths and a nurse came by and asked if we needed anything.  I told her what we needed and she helped us out.  She taught my daughter how to use the crutches and she jumped out of her wheelchair on her good foot, chomping at the bit to get going.

We were finally free to go.  We parked a little far from the emergency department and I didn’t want to leave her by herself.  It was starting to get late and it was starting to get busy there.  She started following me on the crutches and called out to me.  It was too hard.  She wanted to give up. She was exhausted.  This was taking too long. She wanted to walk, to run, to jump.

I looked at her and said, “One step at a time.  Don’t rush. You can do this.  You are one of the toughest kids I know.  Let’s go.”  She hopped back on those crutches and started to talk to herself, “I can do this.  Come on.  I can do this.”  We went slow.

I wanted to rush again but you held me back.

This sprain was a lesson for both of us.  A lesson about you.  A quick temper doesn’t change the situation.  I found a definition of you that said “a calm endurance of suffering.”  That is not something I have demonstrated.  Yes to the endurance part.  But calm? No way. I sprained my ankle in 2009 and remembered what a pain in the ass I was to everyone and my husband and you became BFFs.  Now it was my turn to support my girl through this.  I know exactly how she feels.  I freaking hate it when things don’t go my way.  But of course they rarely do especially with five kids so over the years, I have softened enough to get to know you on the regular (or maybe the kids have just worn me down and it really isn’t you that I have found but quiet capitulation).

Working with you takes practice and when I am tired and hungry and sitting beside an inebriated man who wakes up every two minutes and yells, “Rhonda!” in the “yellow zone” aka back closet of the emergency room waiting area, I have to dig deep.

Now that I have soothed her to sleep and told her how much I know it hurts and that it will hurt for awhile, I can step back and see that you weren’t so hard to conjure up after all because I have discovered the root of your very word – pei.  It means to suffer and endure.  But there is another meaning.  It means firm and unyielding like a river’s current.

Well if you put it that way, I understand you.

I will be unyielding in my compassion for this child that will be forced to do one thing that she feels she can’t do – rest.  I will be firm in my love for whatever she needs to feel for however long she takes to heal.

I think this is the beginning of a beautiful friendship.