I didn’t have a name for you until a friend of mine sent me a newsletter on this subject by Two Bossy Dames where you are the topic of conversation:

DM: WELL, it’s hardly surprising, given the way Society pathologizes ANY emotion women express that’s not Bright Sunny Pleasantness, that women tend to shove anything more complicated or powerful than that under the rug UNTIL we explode with a marginally incomprehensible level of incoherent fury.

DS: Oh, my goodness, yes, when your palette of Officially Acceptable Emotions runs the whole entire gamut from Very, Very Mildly Annoyed (But It’s Fine, Totally Fine) to Absolutely Transported By Joy (But Not Too Often, Lest Ye Be Mistaken For a Manic Pixie Dream Girl Or Hysterical), it’s easy to see how that would be a problem. People get really worked up about female anger, and it’s a strong undercurrent in these pixel pages every week. Maybe it’s a stronger leitmotif in our minds than it is in the actual words, though? That feels uniquely feminine, too.

Around this time of naming you, I was learning about Oya in my Sacred Female Soul Journey course from my friend Hannah.  In Yoruba, Oya means “She Tore.”  She is the only African Orisha brave enough to confront death.  Oya would definitely be the poster-lady of rage.  But where Oya is the goddess of winds and tempests and signals a dignified and powerful rage, you sometimes seem like a toddler throwing a tantrum in the guise of a mature married woman with five children… 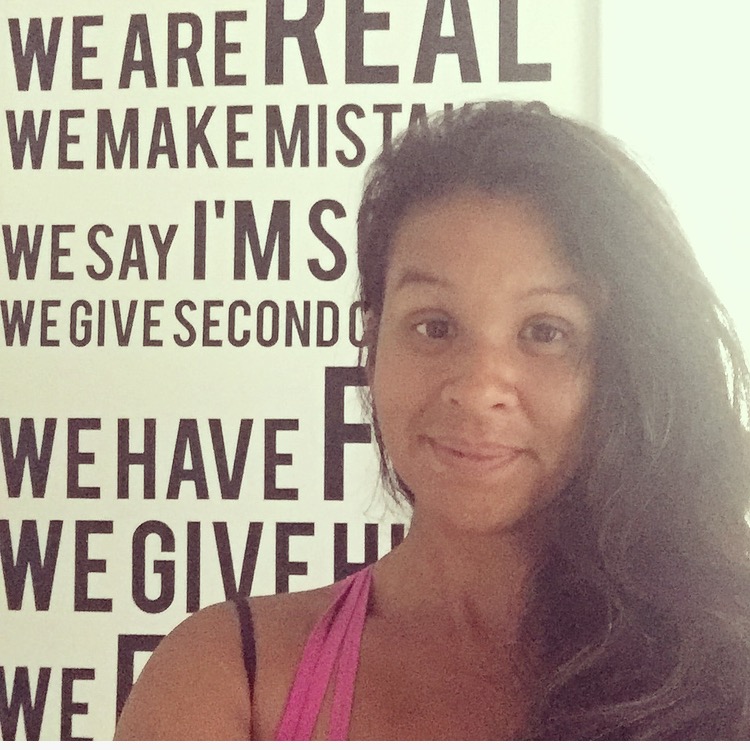 You arrived as an uninvited party crasher yesterday morning on my birthday.  See this picture above?  This was taken right before you came.  A mild incident blew the door wide open enough for you to make a grand entrance, sashaying to centre stage wrapped in a pink boa of arrogant self-righteousness disguised as justified indignation.  Each step you took in your piercing stilettos detonated a slew of f-bombs and cries of outrage.

Thank goodness I escorted you outside on a stroll through our city ravines.  In an amazing display of sacrifice and unconditional love, my Ever-Patient husband accompanied us both on our rage walk.  You needed both a spectator and audience participant and with a deep sigh he reluctantly volunteered.

For a while I thought I had exorcised you out of my psyche.  You had disappeared.  I looked for you at a certain time every month but all I found was Lady Weary with her signature eye roll and slouched shoulders.  Maybe I missed the signs of your presence.  I couldn’t detect you when I took the path of least resistance.  As far as I can tell, you went to sleep when you figured you weren’t needed.  I had a bag of tricks that repelled you and kept you in the shadows.

But you were in fine form yesterday morning.  For the first hour of our rage walk, you performed the first act rather convincingly but very predictably.  You began with the usual Rant n’ Rage and then progressed to the Cuss n’ Cry.  Even in the tangle of our beautiful ravine system, you managed to disturb the peace of cyclists, pedestrians, and animals alike.  You even snapped at hubby dearest for saying Good Morning to every passer-by because you really held tight to the belief that in fact, it wasn’t a good morning.  To each her own, I say.

About halfway through, you threw my flip flops in the brush.  Apparently, in addition to cheery morning greetings and amicable head nods from strangers in spandex, your footwear was aggravating you too.  You definitely got your badass Leo self on at the expense of everyone in your roar path, including me.  At this point, you took pleasure in berating me as a deplorably annoying hypocritical earth mother that not too long ago hated walking barefoot and killed insects at will.  In that moment, I knew that this rage was different.  It was from a desperate place.  A place that wanted to stay hidden and dark.  A place where my sorrow burrowed a hole where it stayed worried about being unearthed and caressed.

Lady, you taught me what sorrowful rage could feel like.  It was a descent I had put off.  A descent into shadow. When I saw this, I wanted to tear my clothes off and sit on a rock like that Van Gogh sketch I had found.  And in the midst of walking barefoot with my husband who was now walking at a safe distance apart from me – far enough away for me to flail without him getting caught with a sharp elbow to the face and close enough to hold a space of love and compassion so I could just let it all out without fear of judgement and reproach.  With this act of love, he withheld opinions, solutions, and defensive tactics.  He saw you, Lady Rage, and he dared you to try your best to conquer love.

Obviously, you were no match.  You had no idea what walking barefoot would do to you.  You had no clue that it would stop you long enough for me to stop the Cuss n’ Cry and move to Surrender n’ Sob.  You weren’t prepared for mama earth herself to step in and take care of us – both of us.

You fought hard.  I admired your tenacious pursuit of being right and how you spewed with reckless abandon, weaponizing words like ‘should’ and ‘can’t.’  I admit that I felt the thrill and liked it – the rush of heat that churned from an ancient and wounded place, an unmapped territory found deep within the female body.

When my hand grazed the Queen Anne’s Lace, the softness of the flowers softened you.  I noticed your brief hesitation before saying out loud, “Nice try you little weed.  You can’t wake me up from this.  I have her and I am not letting her go.”  Then you tugged me back to the darkness even as my toes were tickled by the stalks of plantain.   I heard you faintly murmuring, “Oh plantain, you son of a bitch.”  I formed a small smile recalling memories of the kids and I using its leaves for healing on our nature walks.

Then there it was, all alone in a perfect green patch of grass.  The buttercup.  Golden and innocent with a sheen that sparkled in the sunlight.  You started to tell the buttercup to f*ck off when I just couldn’t take you seriously anymore.  You were cursing at a freaking buttercup.  I started to laugh at the absurdity of it all.  It was beautiful and perfect as-is, that little buttercup. As-is. Completely ignoring you and going about its business almost flaunting its natural ease at being.  How does one rage at a buttercup?  Come on.  That was the beginning of your demise.

You weren’t prepared for Act Two.  We came to one last hill and a set of stairs that we had to climb to get out of the ravine.  I could sense your confusion.  Normally, there was nothing that could get you to back down so fast.  Your eruption was almost always followed by days of irritability or guilt or shame. But I was smiling.  That was new to you.  I was smiling because I finally knew that I needed it all – coming face-to-face with you and letting you loose.  I needed to descend and face the parts of me I keep hidden and locked away in my own Pandora’s box.  Yes, someone accidentally opened it but instead of struggling to shut it, trying to catch all the demons by their tails and shoving them back in before anyone sees them, I voluntarily emptied it out with a little bit of affection, a little bit of acceptance, and a little detachment.

With each step up out of the valley, I prayed.  I prayed for you mostly.  I prayed for help from all the deities, spirits, angels, and saints I could think of.  Every step was an act of invoking grace.  When I reached the top, I told you something you have never heard before.  I said, “I love you Lady Rage. Thank you for being there when I need you.  But we’re done for now.  Goodbye.”  And you left quietly with the next gust of wind that came through on top of that hill.

And so I grabbed my husband’s hand in silent gratitude and walked home barefoot.  I walked through neighbourhoods and city streets, stepping on lawns to give my feet temporary comfort from the hot pavement.  But it was stepping on all the unintended soft patches of growth between the cracks in the sidewalk that reminded me to leave the welcome mat for you the next time you came knocking.

And by the way, I wrote this poem just for you: 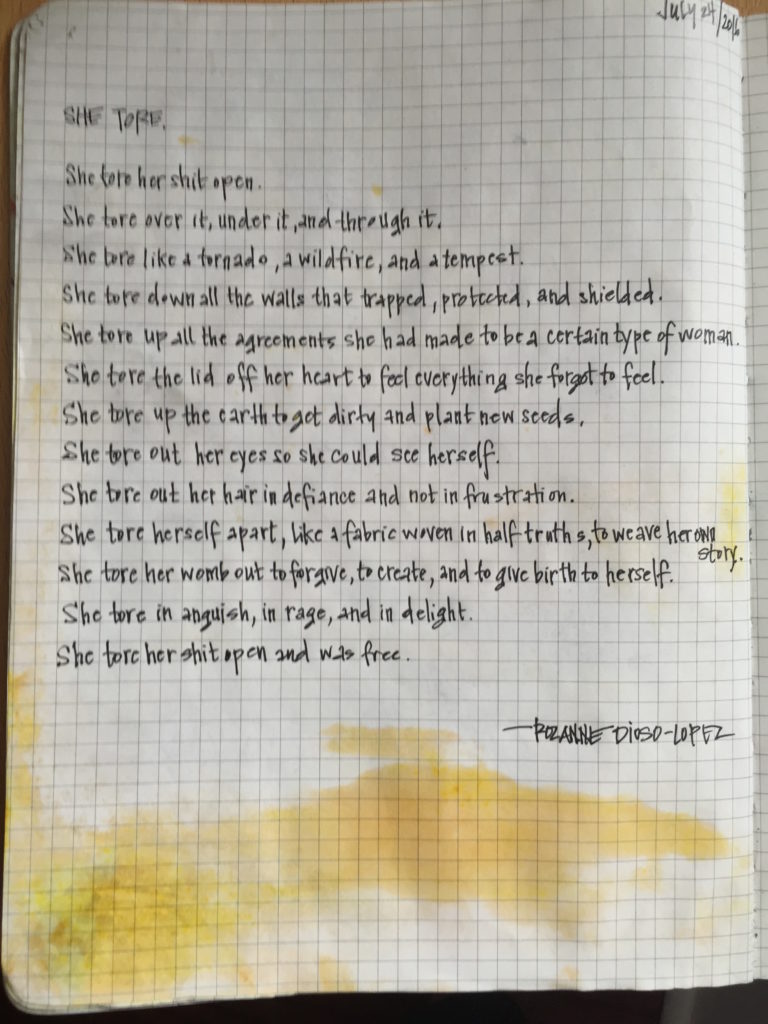