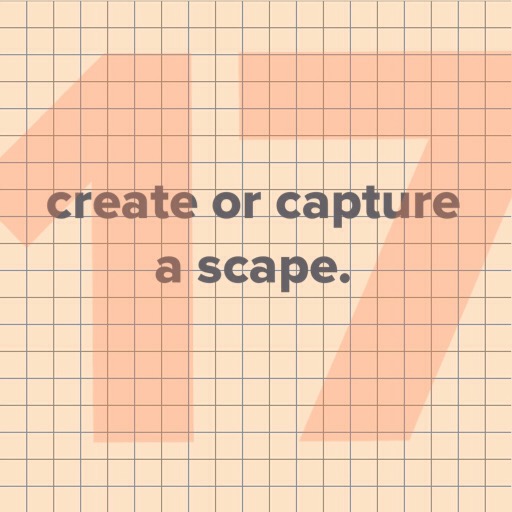 Are you a city mouse or country mouse?

What landscape is around you?  A cityscape?  A countryscape?

What scape intrigues or excites? What scape would you or do you retreat to?

A small backyard one?  A vast and open seascape? A virtual cyberscape? A spacescape?

To get your imagination going, take a look at this University of Chicago article on the word landscape. It’s quite a read but what caught my eye was this statement:

Central to landscape is the role of the spectator. In the case of direct observation, landscapes require a beholder to set the parameters of scope, depth and details within the vista. Generically, landscape is a term that refers to the visible world and “a particular landscape is that portion of the world visible by an observer from a specific position.” [ii] The body serves as a medium for the reception and interpretation of the scene governed by corporal position and orientation within the landscape and the outer limit of sight located at the horizon.

Explore this relationship between the viewer and the environment.

I am a city girl. I have lived in a city for most of my life and a portion of it have been spent in the ‘burbs.  I love the book Invisible Cities

In it he writes,

Cities, like dreams, are made of desires and fears, even if the thread of their discourse is secret, their rules are absurd, their perspectives deceitful, and everything conceals something else. — from Invisible Cities

In the book, he describes various imaginary cities and fantastical places that are stretches of the imagination.  There is Octavia, the spider-web city, whose residents live suspended over an abyss, supported by a net they know won’t last long; Laudomia, the city of the unborn, whose inhabitants have constructed a parallel city for those yet to come; and Beersheba, a city that is on top of pure gold, a city that does not know that “its only moments of generous abandon are those when it becomes detached from itself, when it lets go, expands.”  As you read about these fictional cities, you are an outsider looking at these fanciful scapes.  You are a spectator observing these living organisms of place and time.

Stepping back to look at the big picture, by looking at your own scape and that of others, you are faced with the question of how we experience the world around us.

Make a cityscape. (I love these paper cities from Made by Joel.) Or paint a landscape of the countryside.  Take a photo of a favourite scape – indoors or outdoors.  Don’t forget that you can make it an aerial view.

For some inspiration, look at some stunning landscape photographs from photographer Mina Doroudi.

Or take a look at some famous paintings and their real location counterparts here.

The important thing is to be the spectator of the world around you.  Be a traveler today.  Look at the world in a different angle and don’t forget to let go and just enjoy the view.