We arrived last night and I had nothing left in me to write this morning.  Scratch that.  I actually had too much in me to write.  For the last seven days, I haven’t really exhaled.  It was an amazing experience but there was just so much.  I woke up at 4:00am today because the house was up and hungry so I needed a little bit of extra time to reflect on this past week and this past month of mayBE.

I had no expectations for this month.  I had intentions but had no idea where this adventure would lead.  I knew that I wanted to shine a light on the possibility.  The mayBE.  And the only way I knew how was to celebrate creativity.

Most of my creative output is largely due to people, places, and things that inspire me.  This would be a large component – including others in the process.

At the beginning of the month, as I lined up people who I wanted to guest post, Ever-Patient asked me about how I was deciding who to ask.  All I knew is that I wanted to feature people that have recently touched my life with their creativity in some way.  People who probably didn’t know that they had impacted my own creativity.  This was a way for me to say thank you. I wanted to acknowledge their contribution to my own life by sharing their story.  There were many others on the list that I could not feature this time around; many others that I will hopefully ask to contribute in the future.

This is probably the greatest gift to me this month: the opportunity to interview and to spotlight them. I learned a lot about my own creative process through all of them.  Although they may express their creativity in different ways and see the world with different eyes, there was a common thread that was woven in all their stories.

For today’s prompt, interview someone that inspires you creatively.  Draw up some questions or use some of the ones that I used in the guest posts.  Interview your children.  Interview a mentor.  Do it in person, over the phone, or by email.  By asking these questions, you are taking an interest in who they are and acknowledging the importance of living a creative life. 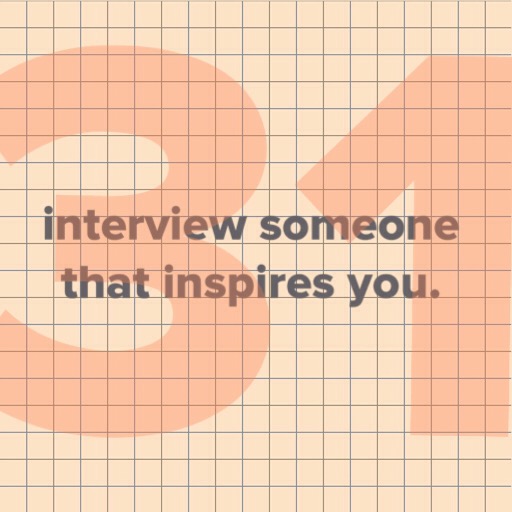 I remember watching Ken Robinson’s famous TedTalk on creativity and his follow up talk.  He mentions something in the latter talk that came to mind as I did this mayBE project:

There are three conditions in which human life flourishes:

2) Curiosity. It is the engine of achievement.

At the end of the talk, he calls for the creation of a “climate of possibility.”

I learned a lot from my children and it solidified my role as their mother/teacher/guide and what I wanted to do.  To create this climate for them. Travelling abroad, I was able to sit back and witness the different ways they expressed their creativity and let them follow their curiosity.

I’d also like to think that I did some of that here.  I created a climate of possibility.  A place where I opened a door.  A place where it was safe to imagine alternatives. A place where I planted some seeds.  A kaleidoscope with which to view your own life as both ordinary and extraordinary.