About that Sagrada Familia basilica.

And about that word “holy.”

Looking at the etymology of the word, “holy” is derived from “whole” and was originally used to describe “healthy, entire, and complete.”

The Sagrada Familia is still under construction – far from complete.  Over 100 years in the making and there is still maybe a decade or so to go.  But to me, it is complete.  It was probably already complete when Gaudi conceptualized the idea, when the original creative seed was planted.

Even after his death, people continue his work – a modern day guild.  It is being built by a community and by generations following him like the cathedrals in the middle ages.  The ultimate expression of faith.  Gaudi didn’t expect to finish the basilica in his lifetime.  Everyone that worked on it at the beginning had to be willing to participate in something larger.

Some people have issue with the money spent on religion that could be used to help the poor.  I don’t disagree. But we also spend money on consuming goods all the time, goods that provide instant gratification and end up in a landfill.  I also understand that cathedrals and great structures have been built on the backs of the poorest people throughout history.  But is it possible to see the good?  Can we see the beauty in this too? Can these accomplishments still be a testament to dreams fulfilled?

When you see these works, these grandiose projects that began as ideas, as what-ifs, as mayBEs, then we can appreciate all of these creations as awesome works of human aspiration and ingenuity.

Gaudi’s initial inspiration was a cathedral in Rome.  He was inspired by geometric shapes found in nature.  He used sandbags to figure out how the church could have the optimal organic shape.  He was a pioneer in natural engineering. Maybe this will lead to a place where we can co-exist in nature without overwhelming it.

“Originality is returning to the origin.” – Antoni Gaudi

As we come up on the end of mayBE, I reflect on my original purpose.  Why mayBE?

As I stood in the nave of Sagrada Familia, overwhelmed by the beauty of possibility, of dreams manifested, and watched my children’s faces of wonder, I knew the answer.

To awaken possibility.  To move away from “it can’t be done” and “I shouldn’t do this.”  To celebrate our existence by opening up to the miracle of infinite possibility in every instance.  To honour our calling.  To choose to follow what we must do. To open that door for my children. To know that a seed of an idea can lead to this: 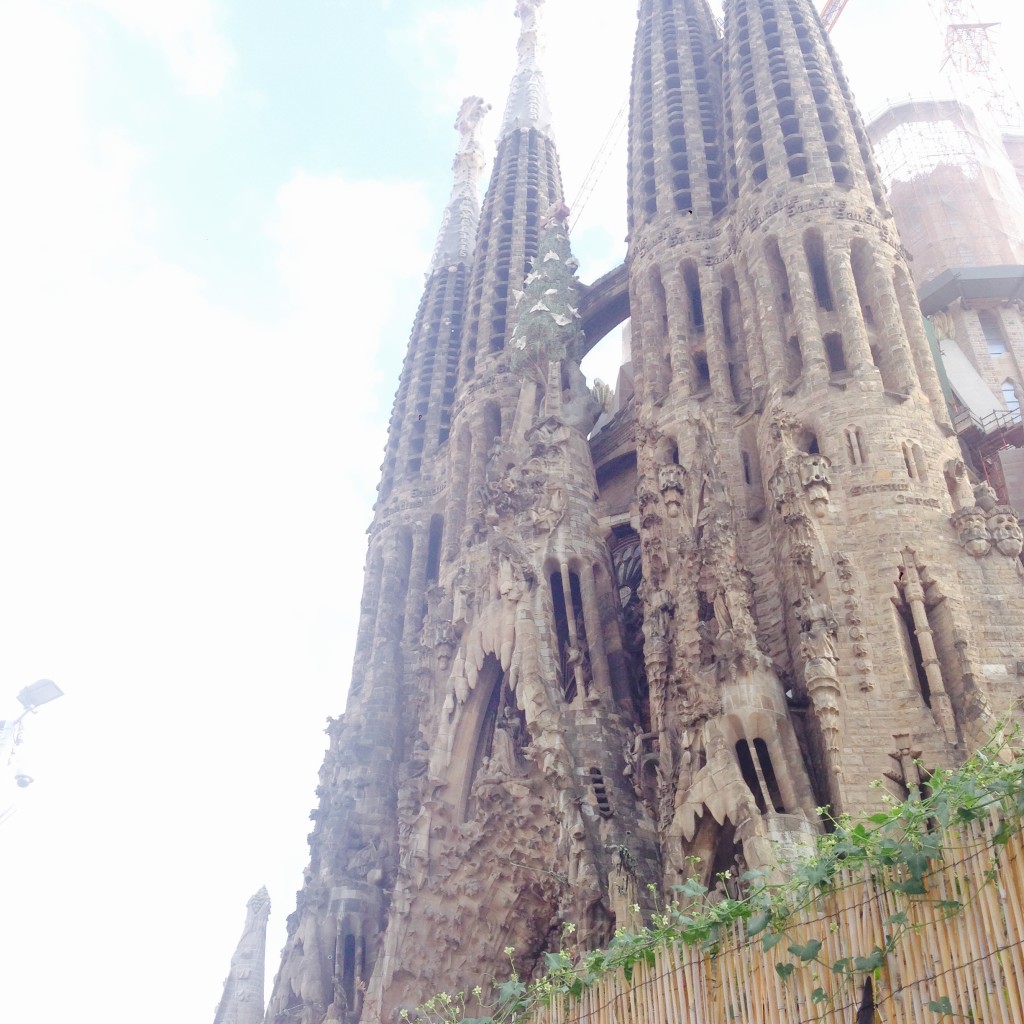 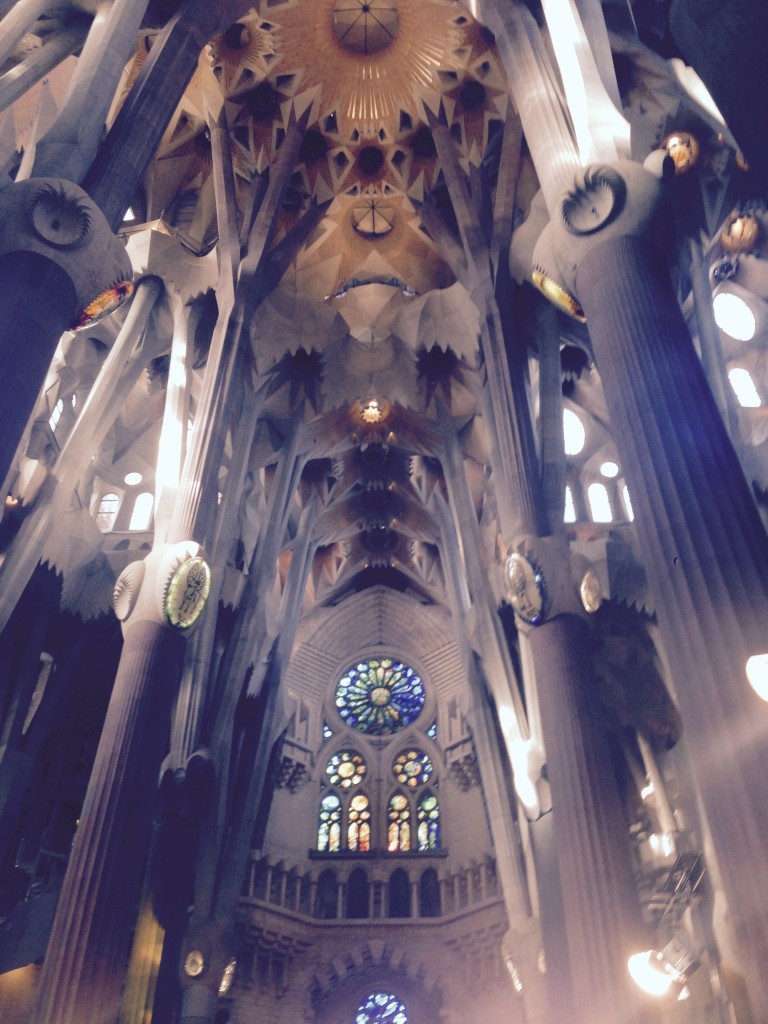 What if this doesn’t have to be an optimist’s silly musings?

We have almost returned to where we began. 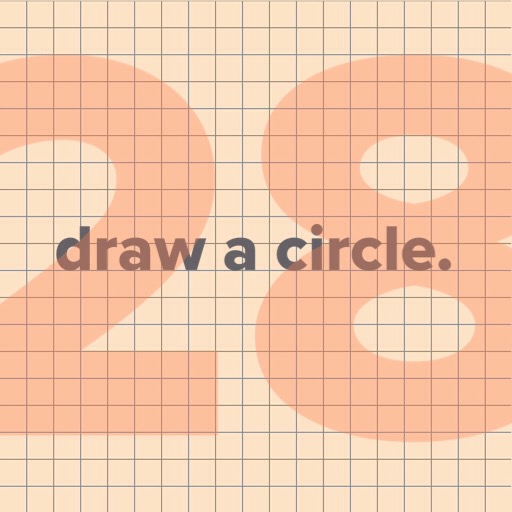 One of my favourite circle stories is the story of Giotto.

Draw a freehand circle.  Try to do it different ways.  Draw in different directions.  Draw it knowing the richness of its symbolism and its beautiful geometry.  Find it in nature. Take a moment to reflect on the whole – the journey, the big picture, and the process.

And I know I have mentioned this quote from T.S. Eliot’s Four Quarters but it bears repeating:

We shall not cease from exploration
And the end of all our exploring
Will be to arrive where we started
And know the place for the first time.

Although we have four days left of mayBE, I am proposing a new adventure beginning June 1.

Inspired by the #100dayproject and Elle Luna’s #100DaysOfPaintingMyDreamsByLuna, I am committing to 100 days of writing this summer.  #100scribbles begins June 1, here on the blog and on violicious.  My writing will be a mix of the here and now, the “write” in front of me and some art journalling with words, some scribbles.  Every day.  100 days.  A summer mayBE.

1. To write (a note, for example) hurriedly without heed to legibility or style.
2. To draw (a picture) hurriedly or carelessly.

1. To write in a hurried careless way.
2. To make meaningless marks, as with a pen or pencil.

Sometimes I overthink things.  I mostly overthink things.  This can lead to great dismay and delay.  Maybe they will be meaningless marks on the page or maybe they may contain hidden truths as I scribble away with one foot in dreamland and the other in full waking mode?

More information on this can be found here on the blog in the next couple of days.