Yesterday was a full day.

From sun up to sun down, we were on the move: hopping in a van, running to catch trains, hopping on and off trains, going up and down a mountain, waiting in lines, and walking from points A to B, often wandering off the planned path.

In between destinations, I find myself feeling in the middle. Not quite standing still, moving away from the beginning, and anticipating the destination.

We had to take a few trains and a cable car  to get to Montserrat. The beginning of the trip began with a lot of Spanish and a lot of pointing to figure out which train we needed to take and where to board the next one while the end of that first leg of our journey brought us to a monastery on top of a mountain.

Although there was excitement at the book ends of the journey, it was in the middle that I found the true adventure and beauty.  The middles: the connection of the beginning and the end.  That is where the magic happens.

It is in this middle part, in transition, that I find a lot of creative inspiration.  If I am open enough to appreciate the waiting, the holding, and the travelling, I leave enough room for observation and insight which lead to connecting seemingly unrelated things and events. 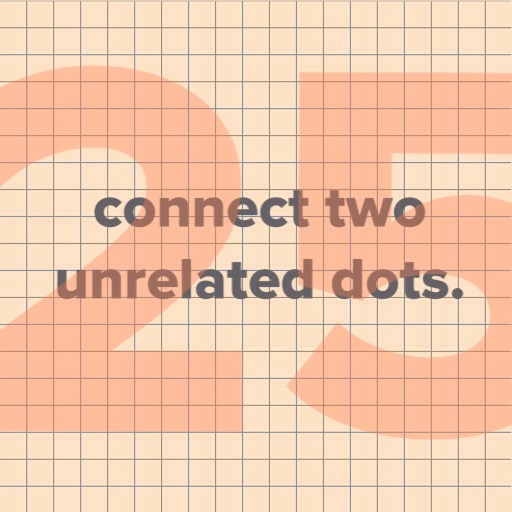 2) Ask someone else for a topic.  Don’t tell them about your topic.

3) Find the connection between the two.

For example, I choose “coffee” as a topic.

Now I ask Ever-Patient for one and he gives me one, “sunrise.”

I look for all the connections in between.  Maybe write coffee at one end of a page and write sunrise at the other and in the middle, write down anything that connects the two.  (These two topics seem easy but can I come up with more than drinking coffee at sunrise?)

Practice by drawing random dots all over the page and connect them.  The shape you make in the end will be a surprise.  Or connect them in the most non-linear way possible.

For kids, they can list all the similarities and differences between the two things or you can let them just try to connect two things on their own.

It’s like a Kevin Bacon six degrees of separation.  How fast can you connect a beginning and an end?

Take any two points and you will find a multitude of ways to get there.  There is always a connection.  Think outside of the box.  Use your own experience and what you have learned along the way.  It is an act in creative expansion and contraction at the same time.  See the parallels and the perpendicular intersections.

If you can find connections between unrelated things, think about how easy it will get to connect with someone you don’t understand.  How we can use our imagination to not only improve our creativity but to also improve our empathy.

“The world is so empty if one thinks only of mountains, rivers & cities; but to know someone who thinks & feels with us, & who, though distant, is close to us in spirit, this makes the earth for us an inhabited garden.”   ― Johann Wolfgang von Goethe