Not a Vacation. Part two: Not a Plan.

An aside:  Sorry for these late follow up posts on our trip.  It feels a bit anti-climactic now. Sigh. Chris had to leave unexpectedly as soon as we returned from our trip to California so needless to say it has been quite the week without him, managing my first time in the jungle with the kids alone.  That’s a whole other story including a fallen tree, an almost-tipped over car, and lots of rain. Lots.  So I have all these saved posts on our “not a vacation” and will try to share them all without interruption now…although having a plan always backfires lately…

Almost two weeks ago in our Manhattan beach hotel:

Me with a sigh and being so random as usual: “I could really use an Earl Grey tea right now.”

(And I never actually have ever craved an Earl Grey tea before this moment.)

#2 while reaching into her front pocket of her bag:  “I packed some just in case, Mom. Here you go.”

This type of conversation is pretty normal.  Whether it’s black jeans, oil of oregano, or lip balm, someone has packed what another one inevitably needs.

This might make one assume we are all superb planners and had checklists and itineraries for this latest travel adventure.

You might be thinking how could I NOT plan for our family of seven??  Logistics, food, housing, etc. All of these must be researched and budgeted right?

Moving to the jungle has really changed my idea about planning.  I soon learned how planning are deeply intertwined with expectations and assumptions. We have found ourselves in terrible tangles – emotional tangles especially – when plans fall apart.

Looking back at some of our travel experiences, the best ones were when we were forced to throw the plan out the window and think on our feet and the worst one – the trip that must not be named – was essentially awful because I did not go with the flow and listen to my instincts, like maybe not taking two children with pneumonia on a 30-hour car ride.  (You would think the dead battery at the start of the trip would have gave me pause. Nope. We. Must. Keep. To. The. Plan.)

Traveling with little people does take some forethought but really not as much as one would need IF you are keenly aware of how these little people function in the best of times and the worst of times.

When are they at their best and how can we fit the most transition travel points in that time frame and how can I sacrifice a little bit to avoid getting everyone at their worst at the very same time during the most harrowing part of the travel?

(Like during the trip that must not be named.  Did I mention I forgot to pack shoes for a child and we didn’t figure that out until she had to go to the bathroom really badly at a disgusting rest stop?)

When you start traveling with your family, start when they are babies.  We have traveled with each child as a babe.  Whether it’s a 2-hour road trip or flying to an island, my kids are seasoned travelers now. Even when we had no money, we would walk, bike, or take the bus just to experience something new in order to appreciate the old or shake us all out of a dead routine.

Once I figured out that everyone loses their shit during the day in the car after sitting more than 2 hours, we drove through the night.  The benefits of driving through the night? Quiet car, quiet roads, and quiet music. And if we had to drive in the day, we would stop right at the 2 hour mark for snacks and stretches and running around until they passed out.  The trip may take a little longer but everyone makes it to the destination without hurting one another or mama having a nervous breakdown (again, like on the trip that must not be named).

This still applies to our family.  On our recent travels, we stopped to get out of the car to see the beautiful vistas on Highway 1 or to hike a little. Sometimes I would forget about the time, enjoying the scenery, only to hear a quiet protest about the music a child has chosen.  I give Chris a look and he stops the car.  We all get out and then back in and everyone falls asleep. 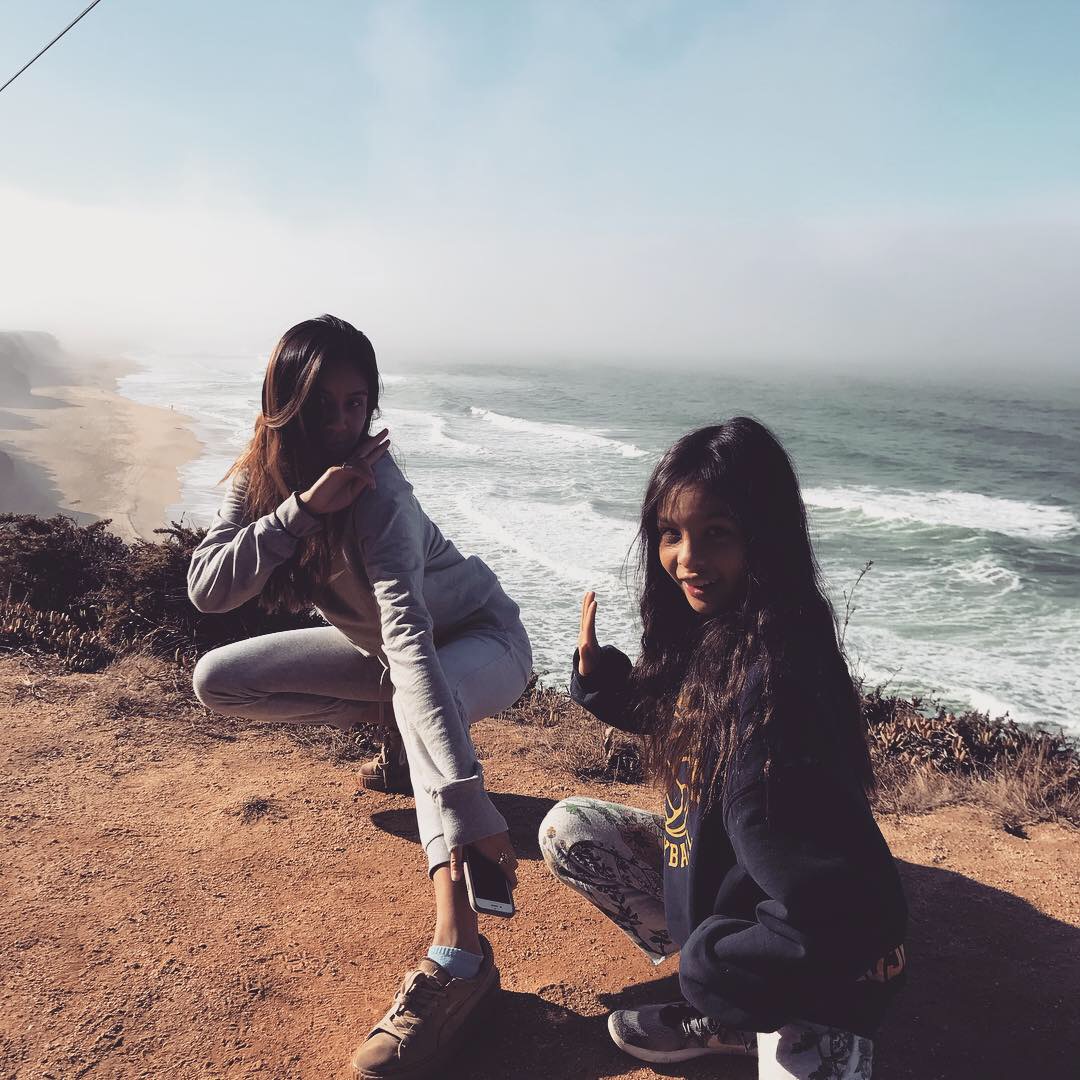 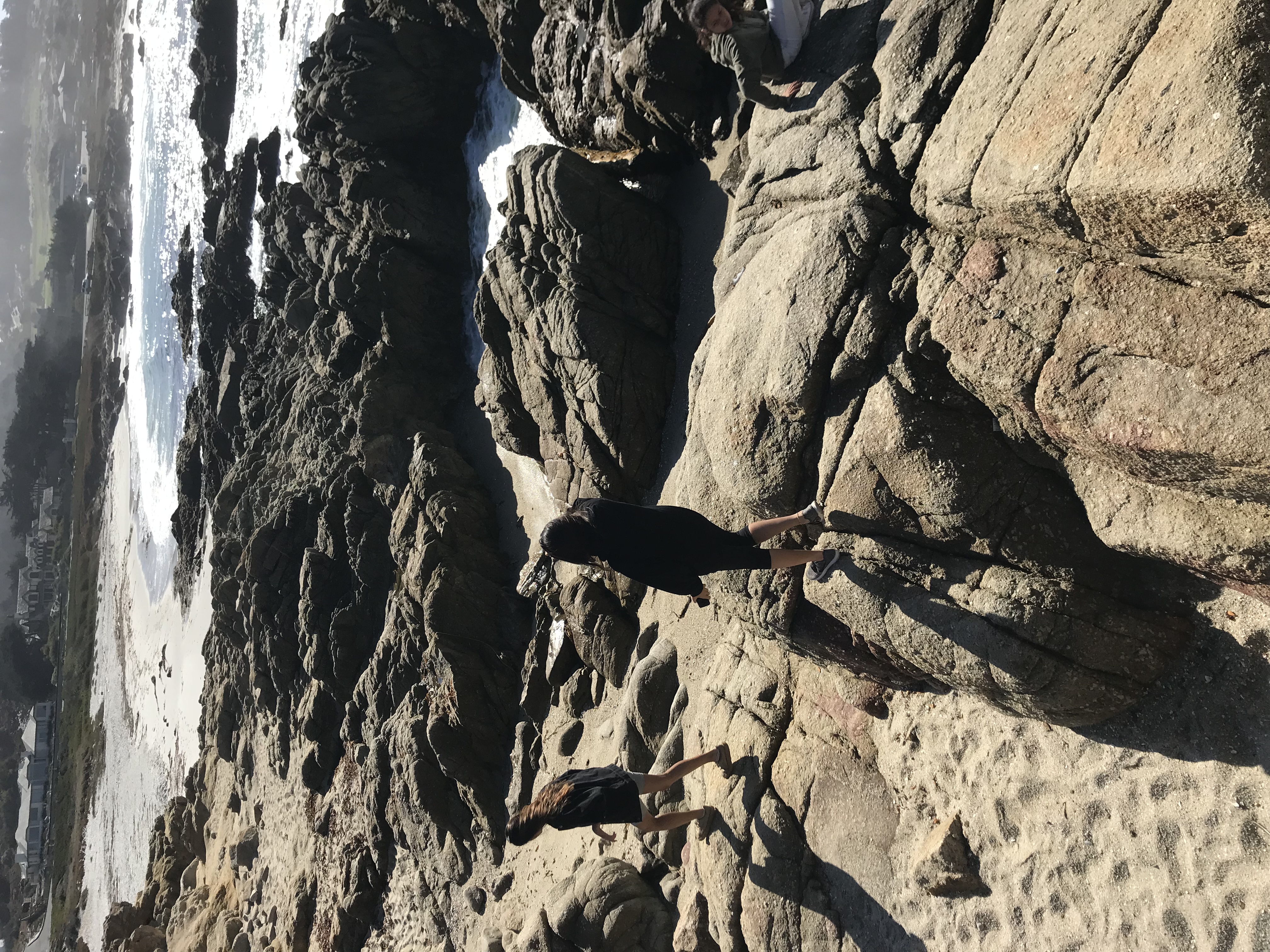 Let’s rewind a little.  There are a ton of places to go in the world.  Why California? How did we decide to drive the coast?

California popped up in our radar because my husband had to be at a “work” event in San Diego.  He has gone to California at least once a year for a work event or to teach a workshop and we have never joined him.  (More on “work” in the next post.)

One of his bucket list bullet points in BOLD is to drive down the Pacific coast with ALL of us, to start in San Francisco and drive down to San Diego on Highway 1. This was a dream for him and the kids were excited about a road trip because oddly enough, my kids still like long car rides even after the trip that must not be named. (They tell me they actually don’t remember much about that trip.  I tell them it was because they were all passed out with high fevers and out of it.)

Without considering any costs involved and looking at the beaming face of my husband, I said, “If we have enough money right now, book the flight.”

Now let me give you a clear picture of our life in this moment.  We have earmarked all incoming money to getting solar power.  ELECTRICITY.  The income we calculate would go to this or at least should.

But like I said, this was HIS dream.  I was indifferent.  But the thought of the seven of us together on driving down the coast and also supporting making a dream come true helped me let go of the possibility again to have a fridge.

Another glitch: his dream specifically states ALL of us yet our oldest daughter was going to be in Europe and she wasn’t sure if she would find the money or have other plans that kept her in Europe when it was time to meet us.

He booked the six of us and then had faith.

Fast forward to a few weeks after we booked our flights.

My husband decided on a whim to look up flights from Europe to San Francisco. She had no idea where she would be at the time, as per usual, and that proved to be a challenge looking up flights.  At this particular moment, she was in Lisbon.  He tried Lisbon, Porto, Paris, Madrid.  They all had exorbitant fares.  Finally he tried Barcelona – the place she lived for four months and where we said goodbye to her two years ago.  A direct flight from Barcelona to San Francisco on the exact date was $175.  ($175 CANADIAN!). He quickly texted her if this was ok and she emphatically said in I think she texted these exact words, “I will get my ass to Barcelona and on that flight no matter what!” And just like how any other 20 year old would react, followed with more texts filled with excited emojis.

(Perfect and the trip soon became how many photos could I take of all five of them together before they would all stage a mutiny and throw my camera over a cliff.) 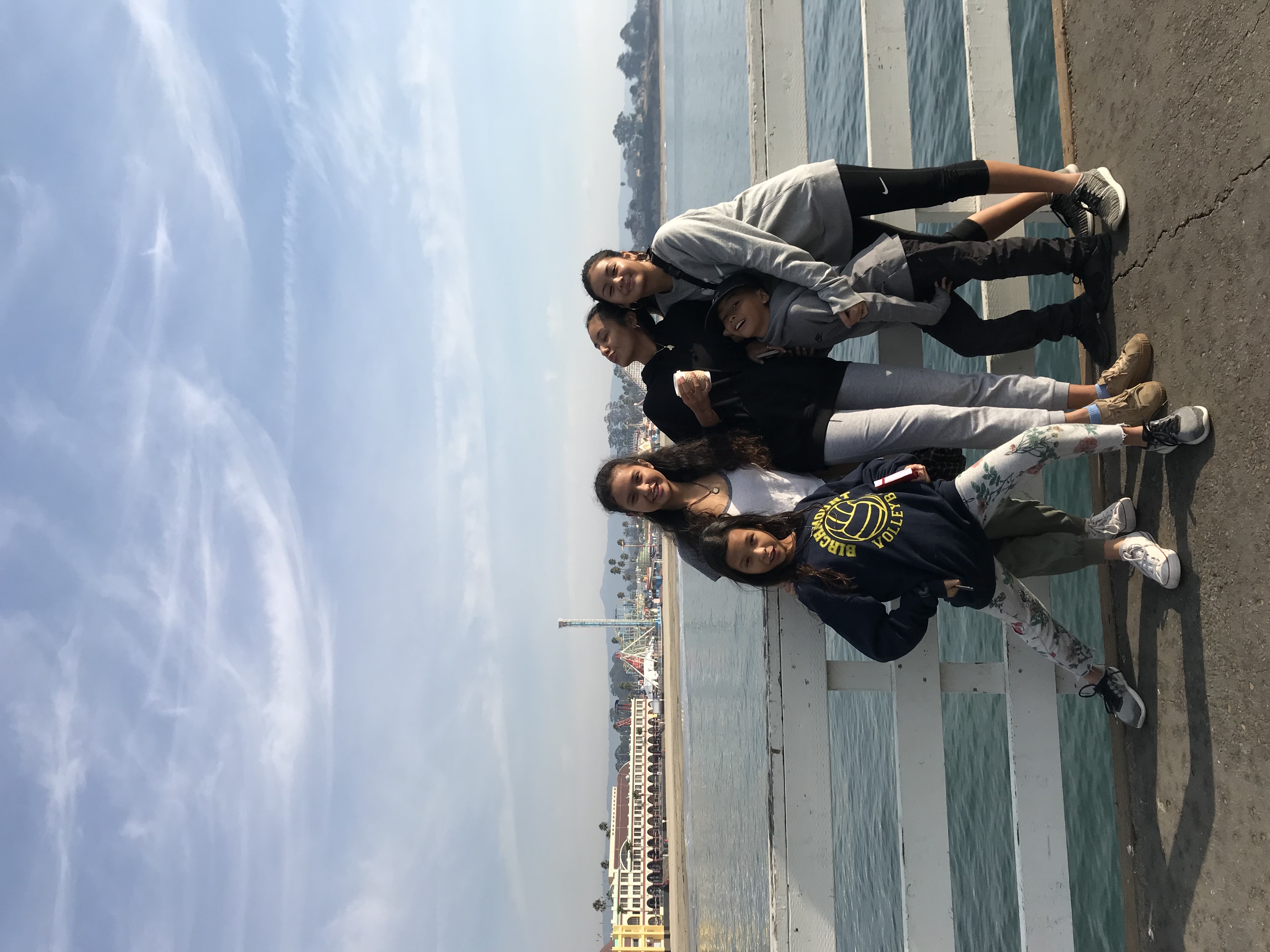 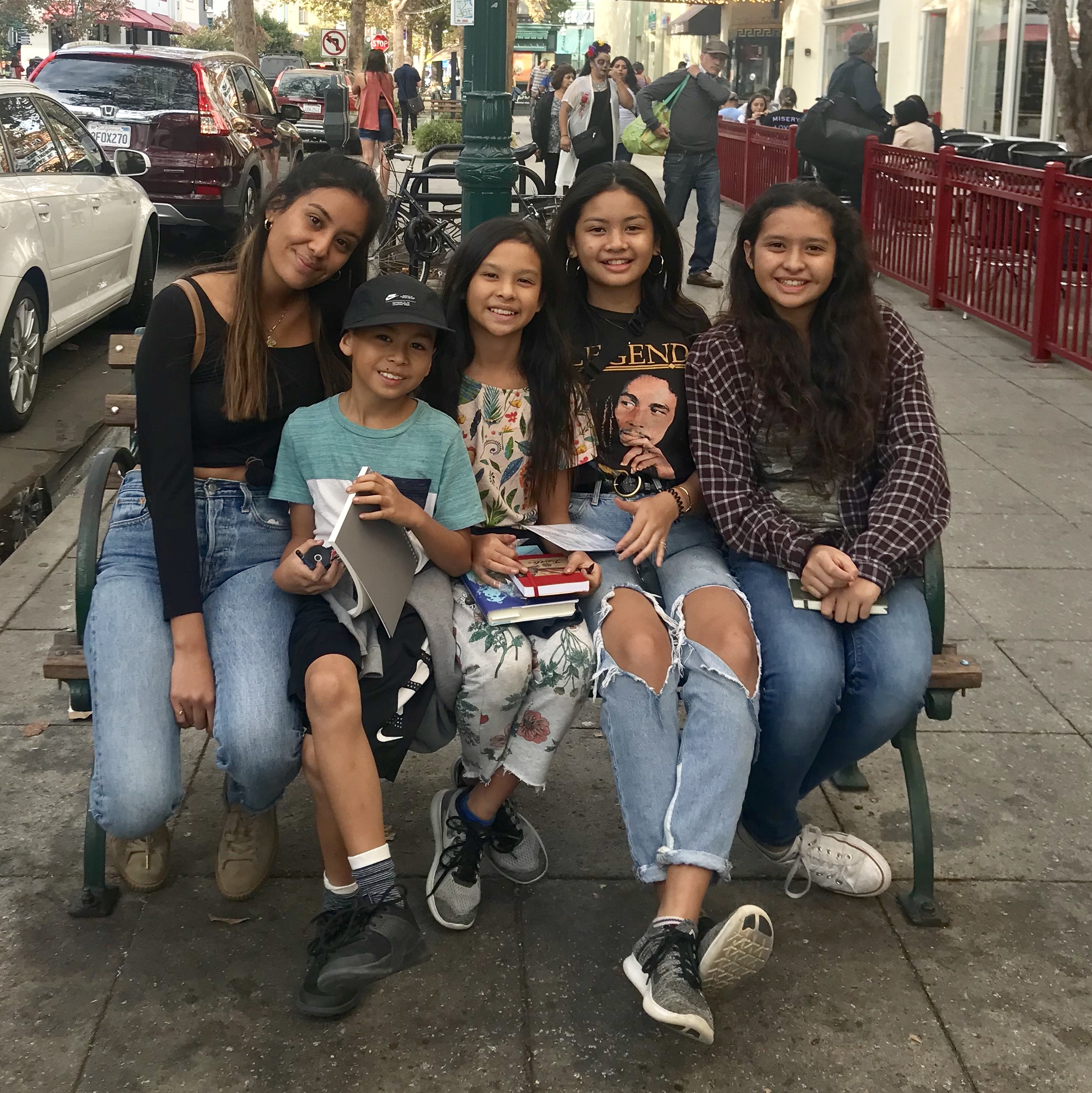 And then I gave up: 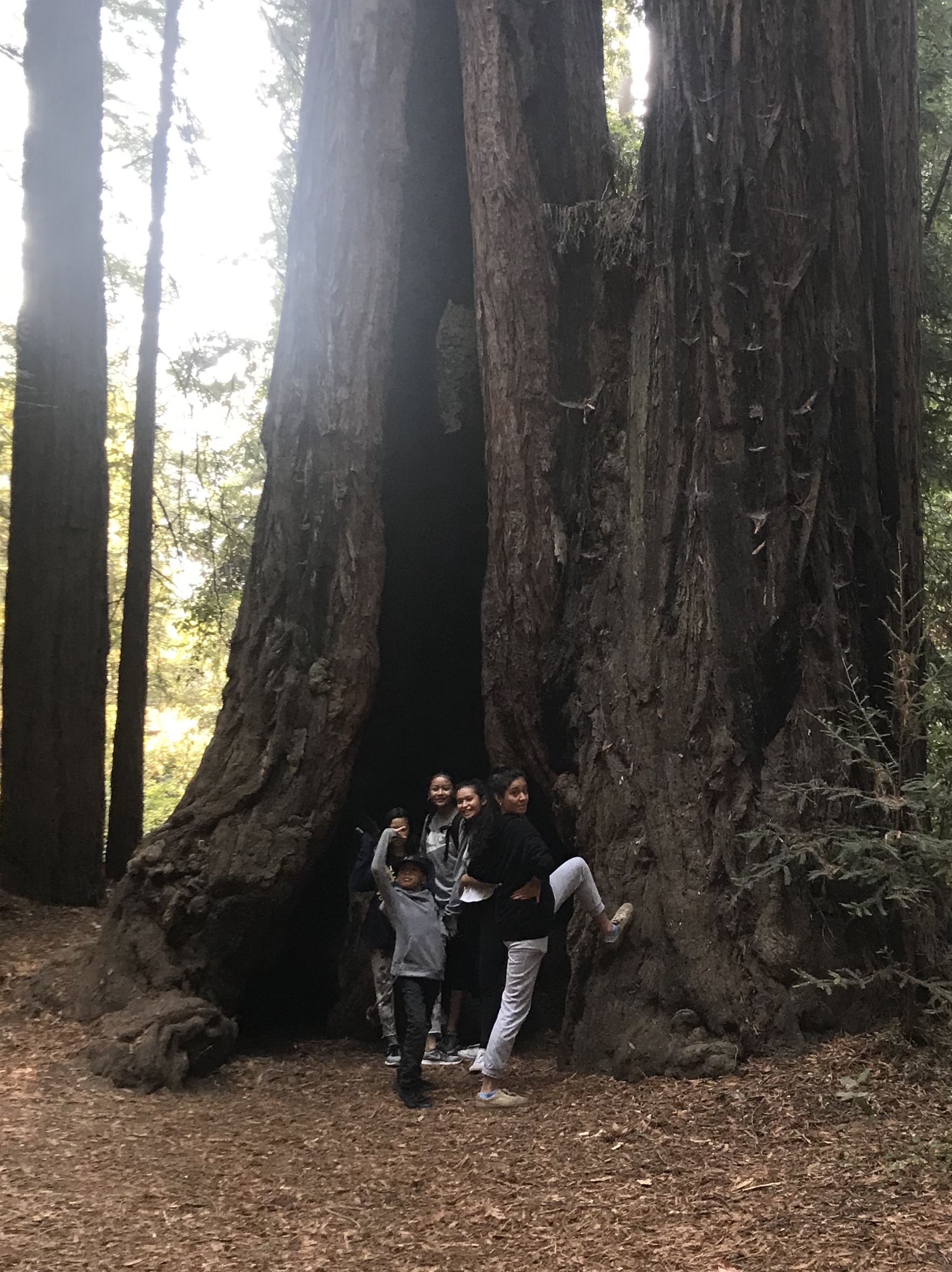 Again on a whim, decided to look up rental cars now that he knew he had to find one that seated seven people.  He found an amazing deal for a seven-seater for the time we were there. We had just enough money in that moment (again, earmarked for solar) and we would pick it up in SF and drop it off in LA where our flight would be leaving from.

After that, we went on with our life.  I remember we tried to sit and book some air bnbs but I got overwhelmed and we went for brunch instead.

What we knew for sure:

We had only these five “for sures” up until about a couple weeks before we left.

Then things started coming together in what I like to call as a serendipitous general outline.

We started with asking trusted people to take care of our animals here. Check.

Next, we had to figure out how we were getting to San Jose and where we would stay for a night. Check.

We would be in San Francisco and what did we want to do? Well, if the priority for us was to spend time with Chris’ cousin and for our kids to meet their cousins, then could we stay with them for a couple of nights? Check.

And then again, we left things for a few days as we tidied our home and bought pet food and cleaned our car.

About a week before we left, we plotted out where we would likely stop on the way to San Diego from San Francisco based on recommendations from friends and family.  We decided to book hotels on points and not on points for the cheaper locations so that we would collect more points by booking these particular hotels, allowing for some free stays toward the end of the trip.  (There is a definite reward for staying loyal to a particular hotel especially as a big family who needs to stay in suites with kitchens but can’t afford the normal rate).

I resisted the old urge to plan itineraries because it had been a long time since we travelled together.  I had no idea what our rhythm would be and what would be interesting to them.  We would let it flow and depend on locals to give us the goods when we got to where we were going.

The kids packed the day before asking their normal questions:

Each person adds things their personal items like a stuffed toy, a compass, more books, nail polish, supplements, a to-go coffee mug, etc. We have learned through over 19 flights in the past two years what makes travel comfortable with the least amount of stuff because the kids soon learned that everyone carries their own bag because mom and dad won’t pay for checked baggage or carry your bag (unless your nickname is a single letter and your duffel bag is bigger than you, then we may help a little).

We have also learned that anything that we forget was not meant to come with us and that we can always figure out what to do about it.  Always.  Things can be purchased and mama can cuddle when a stuffie is left at home.

This all may look like a plan but it really wasn’t.  There wasn’t a formal planning session.  As things came up, we made decisions.  As we got to places, if a child asked about ice cream, we asked where the best ice cream could be found and went which turned out to be the highlight of the trip for one of my kids – an ice cream connoisseur, “Yes, that was my favourite because who does Honey Lavender as a flavour?? Genius!!!”

It was the most enjoyable and relaxing time with my family for many reasons but one of them is definitely because we didn’t really plan any of the magic that unfolded and that really began with the solid YES to making my husband’s dream come true – a dream we all ended up sharing in the end.

Next post…Some highlights from California and if this isn’t a vacation, what can I call this?

One response to “Not a Vacation. Part two: Not a Plan.”