on preparedness. part one.

I like being prepared.  I am not so much obsessed with it as I was when the kids were little, making sure there was always a change of clothes, a bucketload of snacks, and a water bottle in my bag every time we left the house.

But generally I don’t like being caught off guard.

There are times where I have been caught. Those are the times that you will remember forever – like the child with the gag reflex being car sick for 6 hours straight and running out of plastic bags or the time we had to make an emergency trip to IKEA to buy a new mattress with 4 out of 5 children having stomach issues.  I really don’t like the feeling of not being prepared.

In fact, for most of my life I have adopted the Boy Scout motto as my own and even put the children in Scouts for a few years.  I did add to the standard survival kit – a ponytail, tissue, and lip balm – the trifecta of cheap but Macgyver-worthy supplies. (During my pixie cut days, I still found myself using a ponytail for other uses like lending it out to my long-haired companions.)

That being said, I mentioned yesterday that we are leaving for Costa Rica.  We are headed there for a month.

How does one pack for a family of 7 for one month away in a Central American country?  How does a recovering control freak with an irrational phobia of the unexpected prepare to leave for a month without packing everything but the kitchen sink? 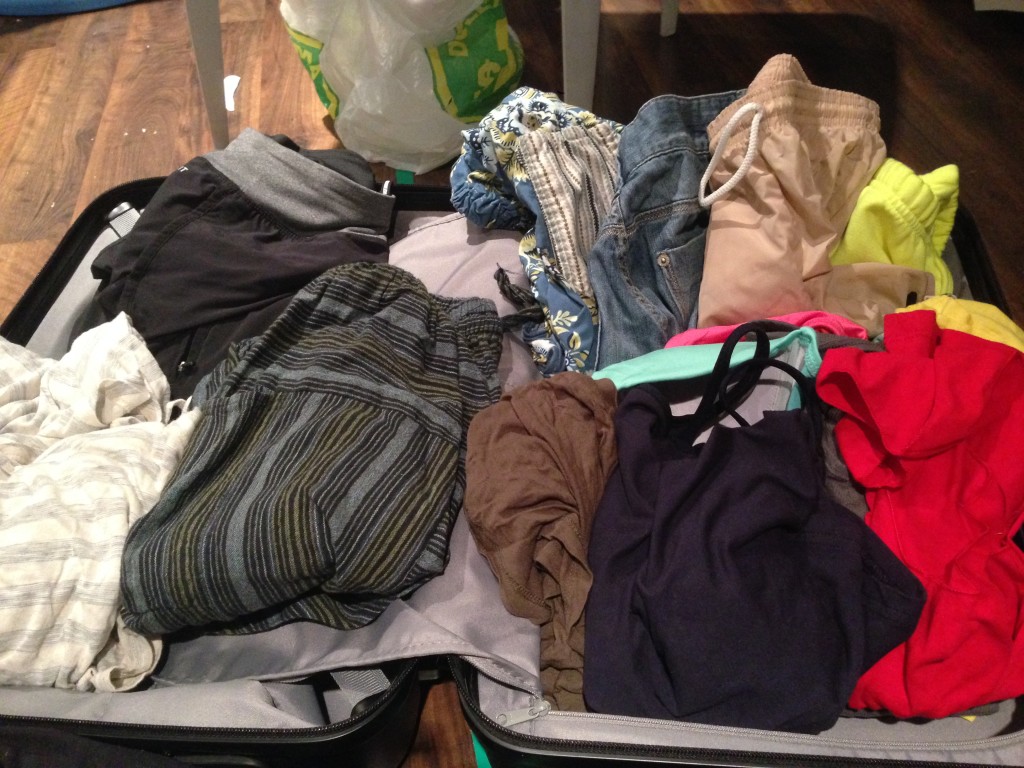 I made a hard and fast deal with myself and the other family we are travelling with: packing light was the main priority.  The phrase, “packing the essentials,” was my main focus as we planned for this trip.  Now the problem was defining “essential.”

Were there going to be grocery stores? What were the prices like? Did a bottle of contact lens solution going to be twice as much? What could I really do without or bite the bullet and pay through the nose if it absolutely became necessary?

I found that there is quite the spectrum of packing – from packing next to nothing and having absolute faith that things will manifest when I need them to being comfortably ready for the unexpected (read: a box of bandaids and ample undies) to packing two back-up first aid kits in case we completely use up the first bandaging multiple sprains and gashes (there are 7 of us you know).

Not surprisingly, I leaned toward the more prepared end of the spectrum.  Thankfully, I have a husband who leans more to the faith in humanity and life is full of lessons spectrum so he keeps me in check by silently removing those extra sets of first aid kits. (Did I mention he is an expert handler of control freaks?)

The easiest thing for me to start with was the clothes. It’s easy to cap clothes knowing full well a) There is a washer and dryer at the rental property b) My children know how to hand wash clothes if need be c) Some children, well really just one child, hates changing out of his pajamas.  In fact, he has lived in a set all winter that are difficult to peel off him as the cloth has started to fuse with his skin. (I pick my battles.) I anticipate that he will feel the same way wherever we happen to be so he doesn’t even have a carry-on suitcase for clothes.  We have stashed a couple items for him in other carry-ons – swim trunks, shorts, and just a couple of shirts and no pajamas because, well, of course, he’ll probably be wearing them on the plane.

I allowed at most 20 items of clothing (underwear and socks excluded) into their carry-on luggage.  At last count, no one has exceeded 18 clothing items.  In fact, my family, as per usual, has turned it into a competition.  Who can carry the least amount of items in their suitcase?  I officially drew the line at wearing a dozen items en route to avoid them being counted as items in the carry-on.  Technically, they weren’t inside it.  A loophole #1 and #2 discovered and a battle I wholeheartedly picked. (I foresaw whining and discomfort on our travels which only I would hear about, of course.) 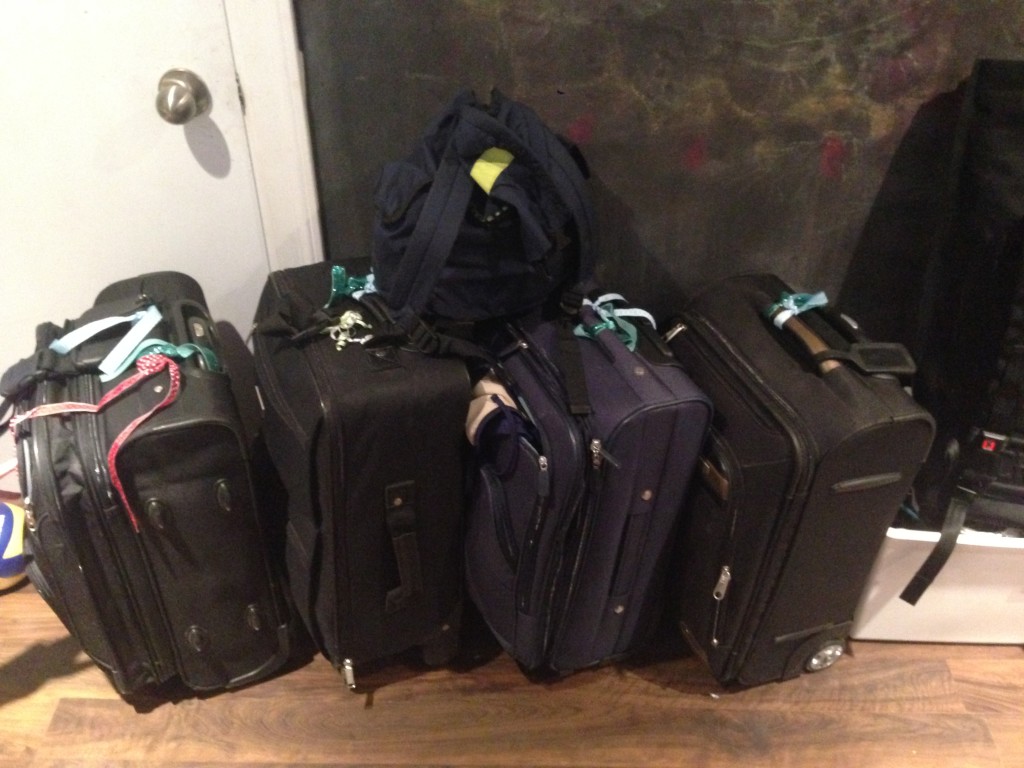 We are planning to just check 1 suitcase that contains supplies we can’t fit into our carry-on.  This is where the packing gets a little interesting. As of today, the suitcase contains basic hygiene supplies (including liquids), medicine, sunscreen, laundry detergent, first aid kits, rain boots, back-up hiking boots, books, Ever-Patient’s filming equipment, a bodum (for french press coffee), travel mugs, and various sizes of pull-ups. (Remember that emergency trip to IKEA that I was not prepared for? Let’s just say car rides and spontaneous bowel movements do not fade from memory quickly and since Costa Rica is notorious for unmarked roads and wrong GPS directions, pull-ups for those with even a stomach tinge is non-negotiable, present company included.)

I have resisted the urge to pack copious amounts of coconut oil, a staple in our house for everything from moisturizer to immune system booster to after-sun care to after-bite to body scrub to aftershave…The list goes on. Ever-Patient, in all his wisdom and sane decision-making skills, consistently tries to appeal to my logical side  in the most patient and gentle ways:

Him: “They will have coconut oil there.  It is a tropical country.”

Me: “I know but what if they don’t have the right kind? What if it’s too expensive? What if they run out because they’ve exported it all away to us North Americans??”

You must think I am a novice at packing.  On the contrary, we have been on several trips over the last few years.  We do at least one road trip per year as a family and have even driven to Miami from Toronto without stopping to stay overnight – the trip that must not be named.  I have taken babies on planes.  I know what to pack for a week’s vacation in a resort or a three-week road trip down south.  A month in a foreign land with questionable phone service and jungle critters?  I am a little out of my league.  I have no idea what to expect.

And this is the greatest and scariest part of it all.

I HAVE NO IDEA WHAT TO EXPECT.

None.  I have never done this before with my family: leaving home for a month, living our same old ordinary lives only in a warmer latitude.  I’ve travelled all around South Africa with my parents and my two younger brothers for five weeks but I was 17 and let’s face it, I really only worried about myself and just followed my parent’s itinerary of visiting every friend and family that my stepfather has in his home country.  Don’t get me wrong, it was an experience of a lifetime, but there was no planning on my part.

I can read all the blogs I want about the matter: traveling with children abroad, traveling with children to Costa Rica, traveling with children to Costa Rica as the lone insane control freak amongst the most relaxed folk on the planet.  Yep, you can find a blog for everything.  But like any family out there, we are unique in our quirks and  fancies.  I want to push my edge, yes, but not to the point where I am regretting not bringing the liquid bandaid (which popped into my subconscious one night to add to the first aid kit.  I awoke to the sound of my voice shouting out “LIQUID BANDAID!” as if it was the long lost answer to the meaning of life).

I have promised myself one last unpack, re-pack, double-checking final lists now that Ever-Patient is back from a last minute business trip.  We will do it together like we always do – frantic with a dash of second guessing, a pinch of patience, and a side of “whatever, it’s all good.”

My mind acts as a web, a six degrees of separation from an original thought.  Binoculars, field guides, and mosquito nets are in the maybe pile.  There is such a thing as being over prepared.  There is such a thing as letting the “what-ifs” and the anxiety of the unknown spoil the anticipation.  This is it.  This is what happens when I lay it out there.  At the end of the day, I will have to close the suitcase, make peace with what I’ve packed even if it means leaving behind the liquid bandaid.

Pssst…For those who have travelled abroad to central america with kids for a month, am I missing anything???  The control freak in me is dying to know…

In Part 2 tomorrow, I’ll discuss my homeschool plans for the next month.