I am grateful for rhythm. (And Rumi.  I can’t get enough of Rumi especially now that we are in the middle of learning about Ancient Persia…)

The mornings have flowed easily.  The kids have their independent work and on two mornings a week, I tell them a story.  We normally gather in my bed and I tell a story from the country we are learning about.  After the story, I help each child with their lesson.  All five children have main lessons that tie into the same theme.

From September to December, we are exploring the globe from our home – learning about different faiths, cultures, and landscapes.  In September, we began in India.  We explored the Hindu and Buddhist faiths, ancient Indian myths, biographies of Gandhi and Buddha, Jataka tales, animals, and the diverse physical geography of the region. 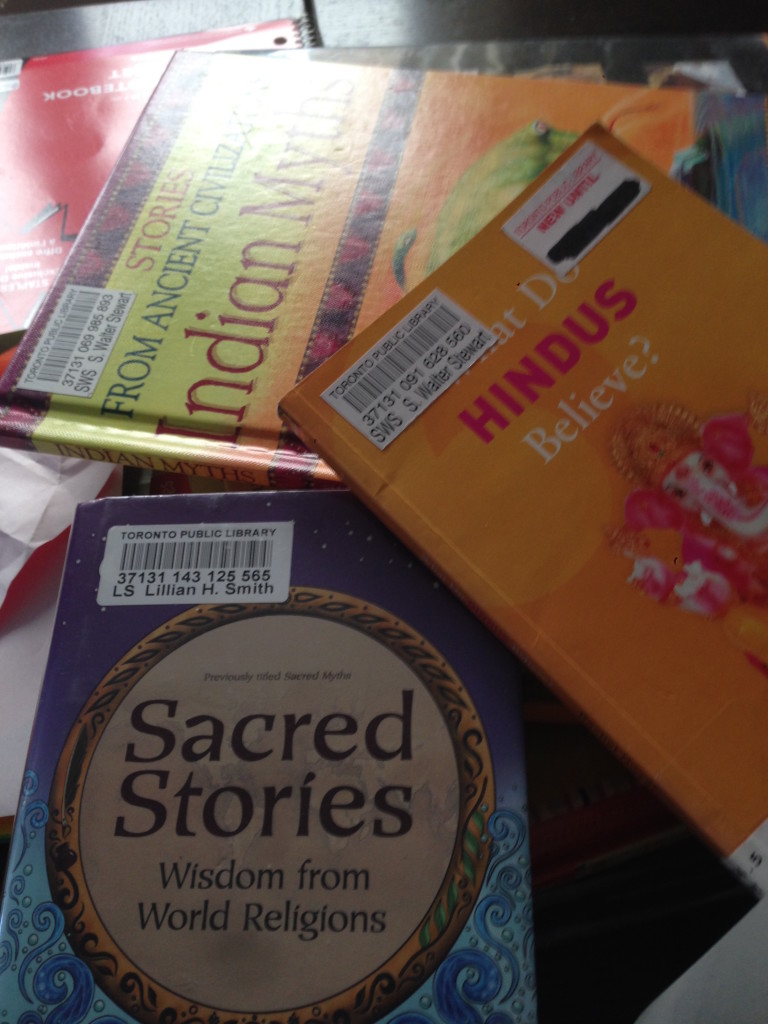 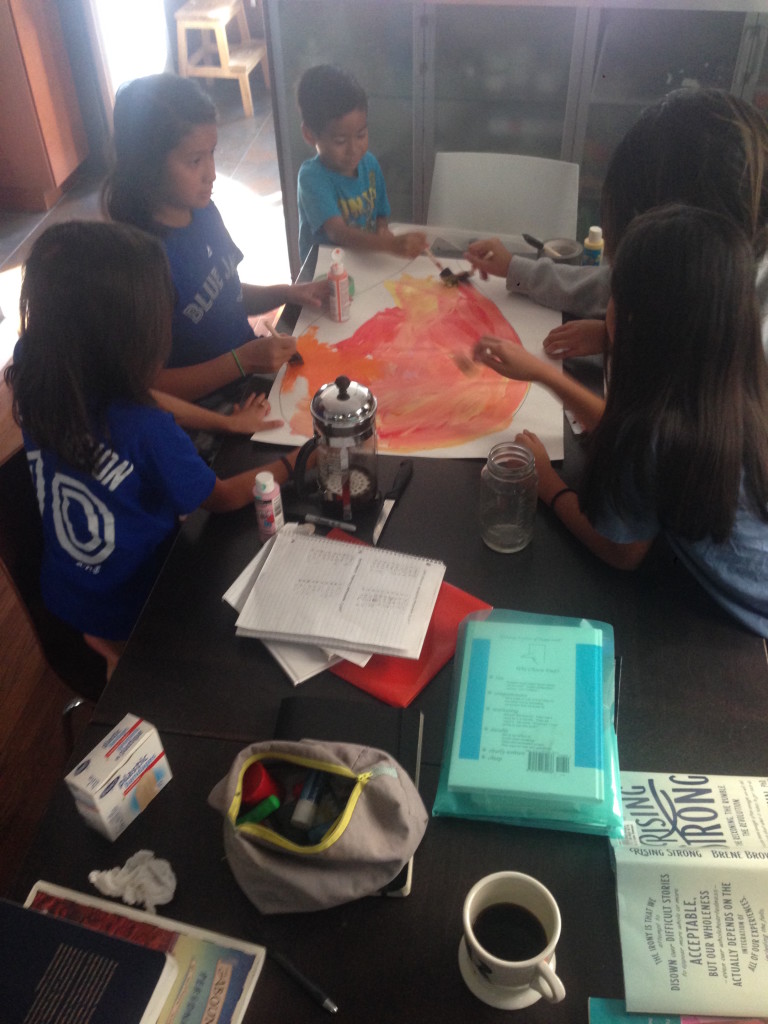 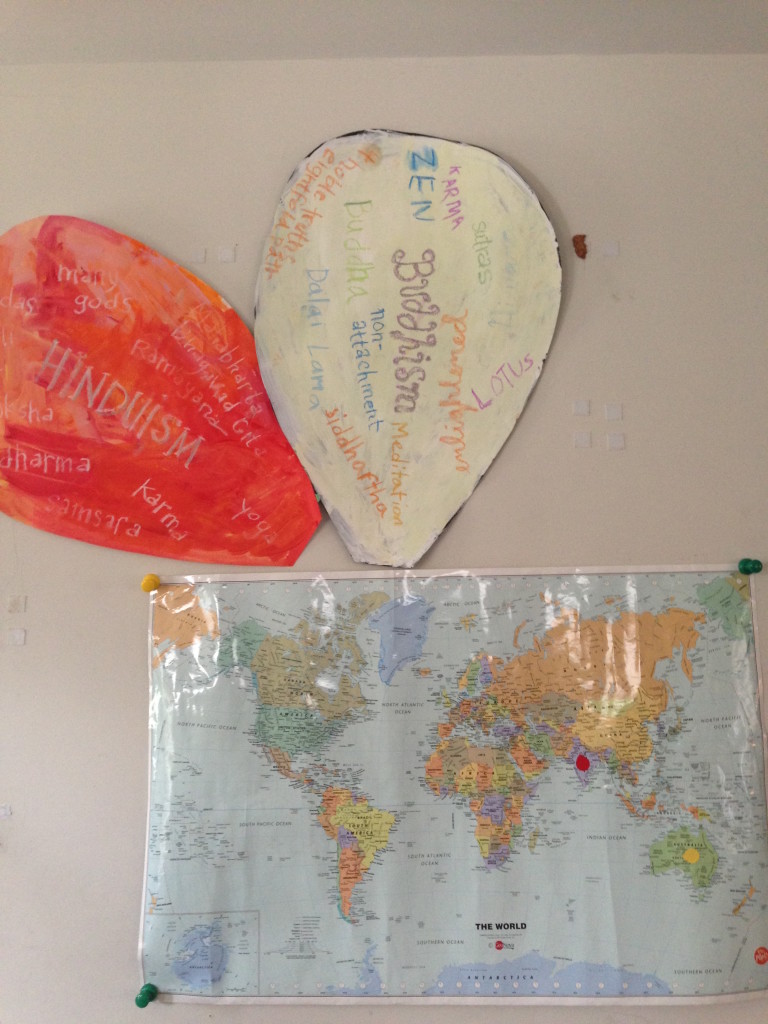 by Ram Dass.  She use the book to write an essay comparing Arjuna’s journey with our own journey into self. She also read Siddhartha

by Hermann Hesse.  I gave her a few questions to research:  Is the spirit of Gandhi still alive and well in India?  What part of the birth/death cycle do you think the soul of the country is experiencing today – creation, preservation, destruction/transformation? During her research, she looked at the politics, socioeconomics, and gender issues.

#2 read biographies on Gandhi and Buddha.  We dropped down in India during their lifetimes and took a look around what the country was like, specifically focusing on traditional Hindu beliefs and how both these figures were born Hindu but had also rejected the caste system and embraced compassion for all.  She wrote a mini essay comparing the lives of Gandhi and Buddha and wrote many quotes in her own Book of Hours.

For our family story, we would all cuddle in my bed, all six of us, and I would tell a story from Ancient India.  #3 learned about the three main gods – Brahma, Vishnu, and Shiva.  Her eyes lit up in recognition and excitement when I told the story of Manu and the Flood, cupping her hands to her mouth so that she wouldn’t spill the beans about Noah because her younger siblings hadn’t heard that story yet.  She also drew a topographical map of India in order to understand the myths and the beliefs.

#4 enjoyed some new Jataka tales  that she hadn’t heard before.  We also borrowed these two books from a friend that both #4 and #5 used for their lessons too:  Buddha at Bedtime and the Buddha’s Apprentice at Bedtime by Dharmachari Nagaraja.  I also told #5 some stories that I made up about some of the animals that lived in India. 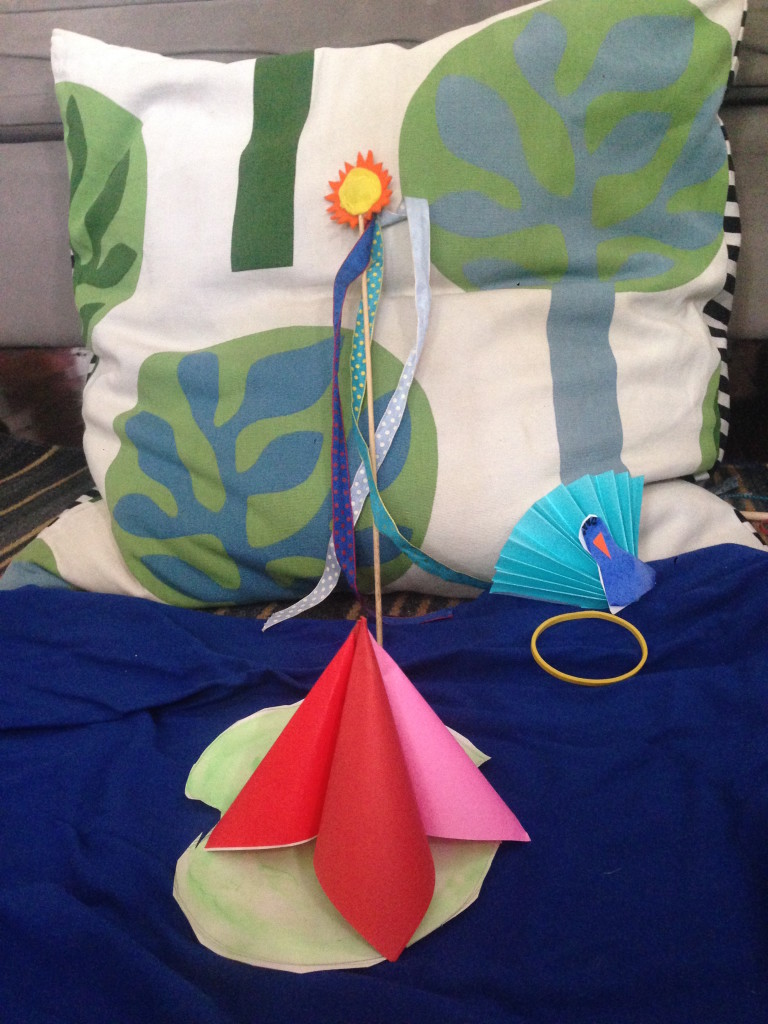 Our lessons also included yoga, meditation, some Bollywood dancing, a samosa feast, an Indian flatbread taste test (we bought different kinds – paratha, naan, puran poli, parotta – and the kids picked their favourite), and a trip to Little India where we bought peacock feathers and henna. 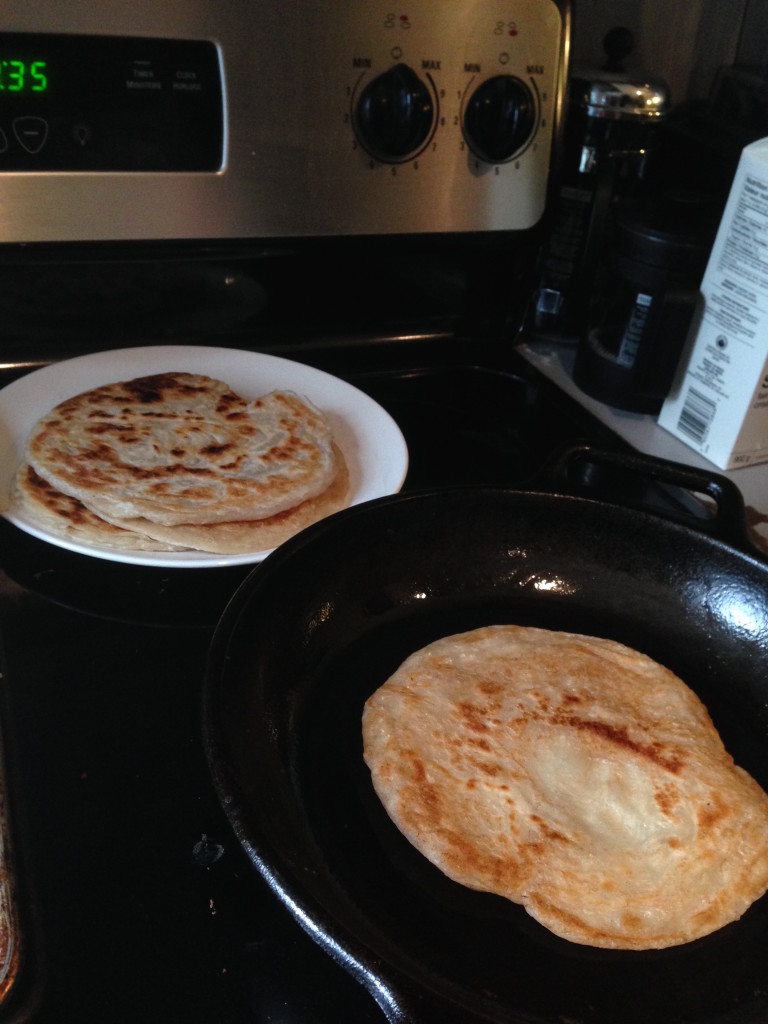 #4’s lotus flower and her Book of Hours with our mantra to recite during our meditations that week: 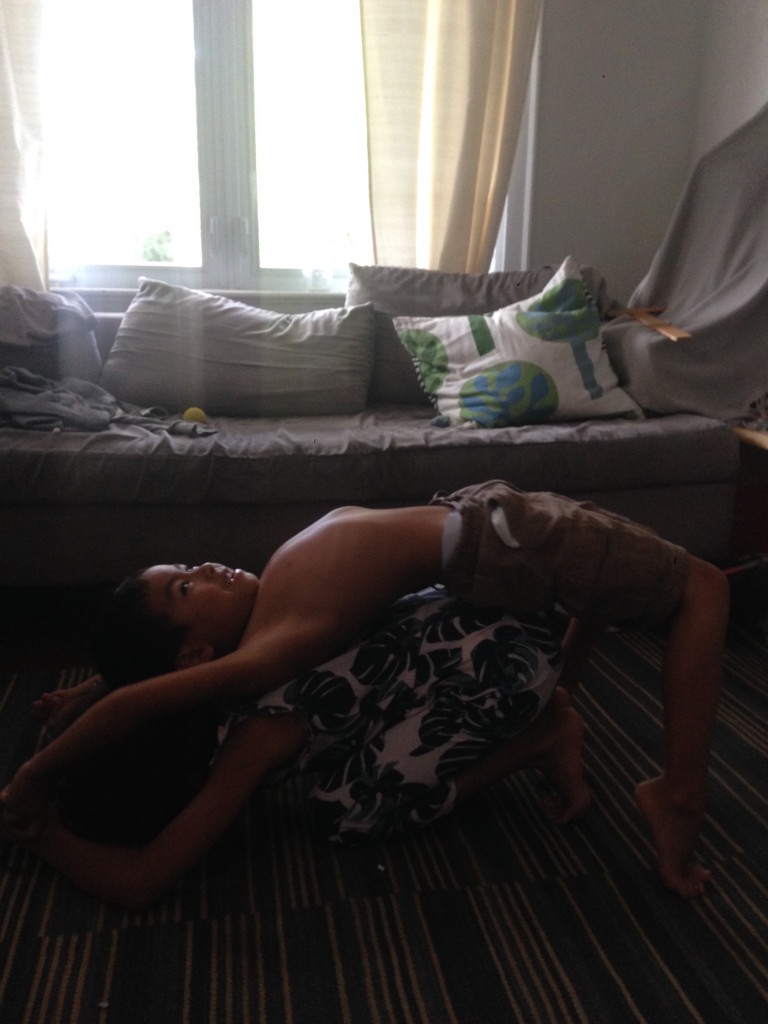 Before we moved on to Ancient Persia, we took a week off.  During our weeks off, one child picks a country for us to visit.  It was #5’s turn.  He chose Australia.  Each child picks something about the country that they want to learn about.  They do some research and find anything interesting on their topic and they are responsible for doing a short presentation on it.  #5 wanted to learn all about the platypus, the kangaroo, the koala, and the wallaby.  #4 wanted to find the best surfing spots and learn about the Tasmanian Devil.  #3 looked at the manmade wonder – the Sydney Opera House – and nature’s wonder – the Great Barrier Reef.  #2 researched Uluru/Ayers Rock and the stories and myths associated with it.  (#1 was fairly busy that week but joked she would research the similarities between Cody Simpson and dingos.)

Now we are on Week 2 of Ancient Persia. 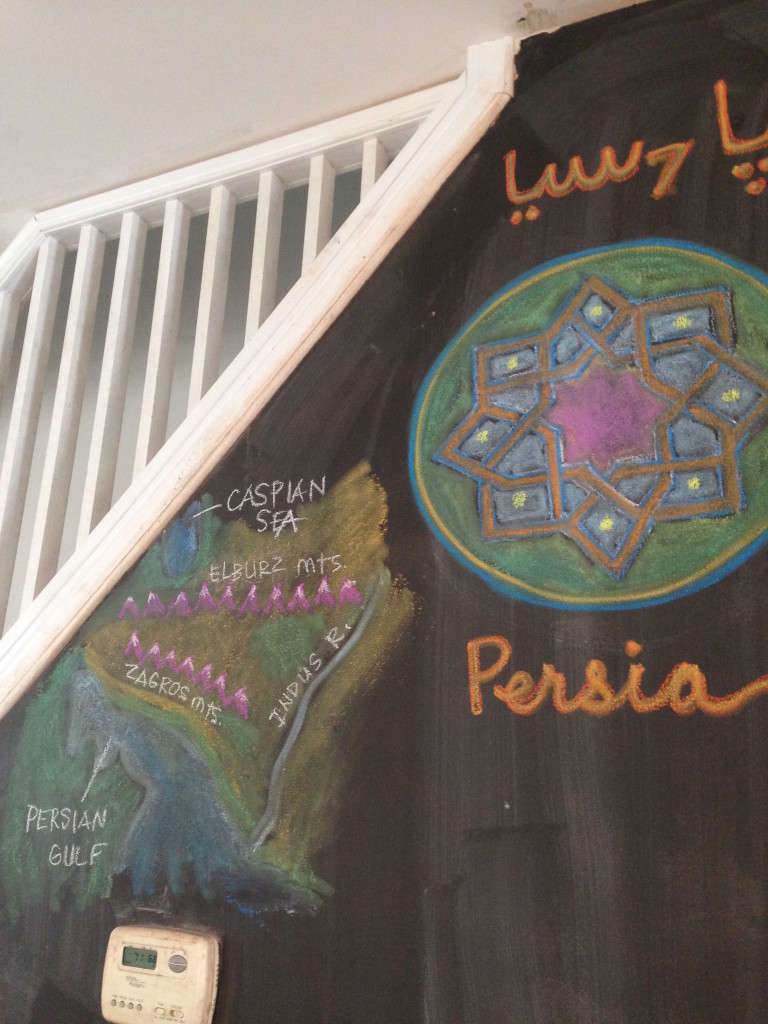 Here are some of the resources that we are using: 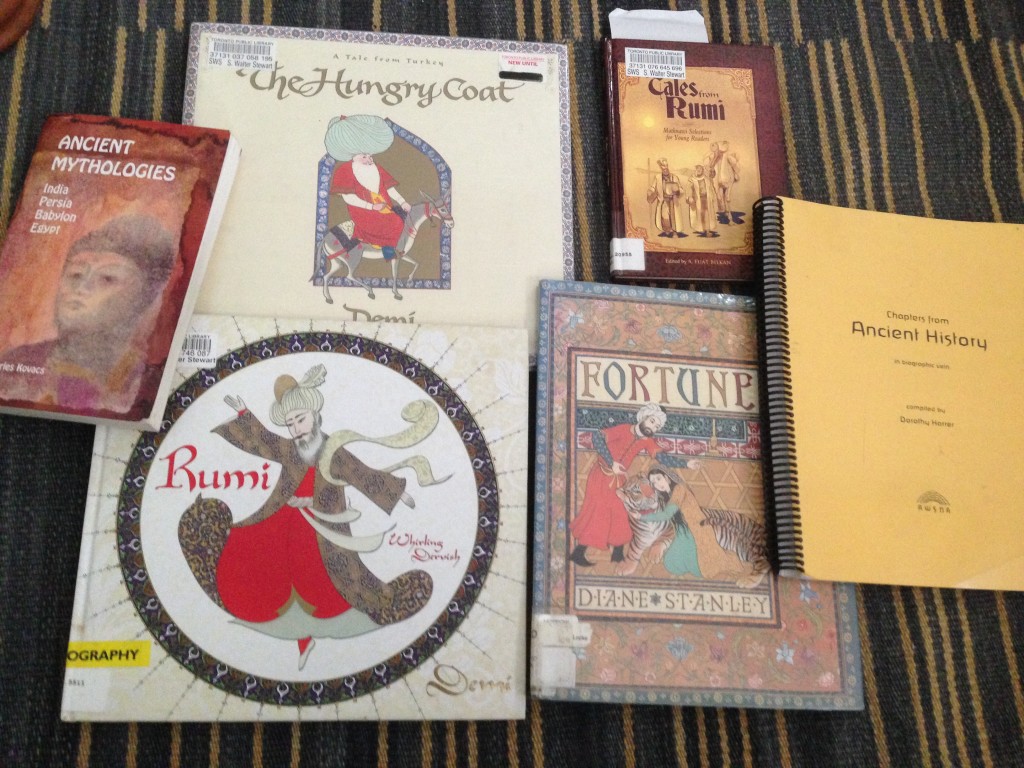 I am using the Tales from Rumi book with #4.  It contains fables written by Rumi.  We are having fun acting out and drawing the stories.

Fortune by Diane Stanley and The Hungry Coat by Demi were great for family stories.

#3’s main lesson revolves around the story of Zarathustra and the God of Light (Ahura Mazda) and the God of Darkness (Ahriman).  She drew another topographical map freehand.

#2 is reading all about Rumi – his life and his writings.  While reading about his life, she also researched Sufism and the Whirling Dervishes.  After watching a YouTube video, #4 and #5 decided to give it a “whirl”: 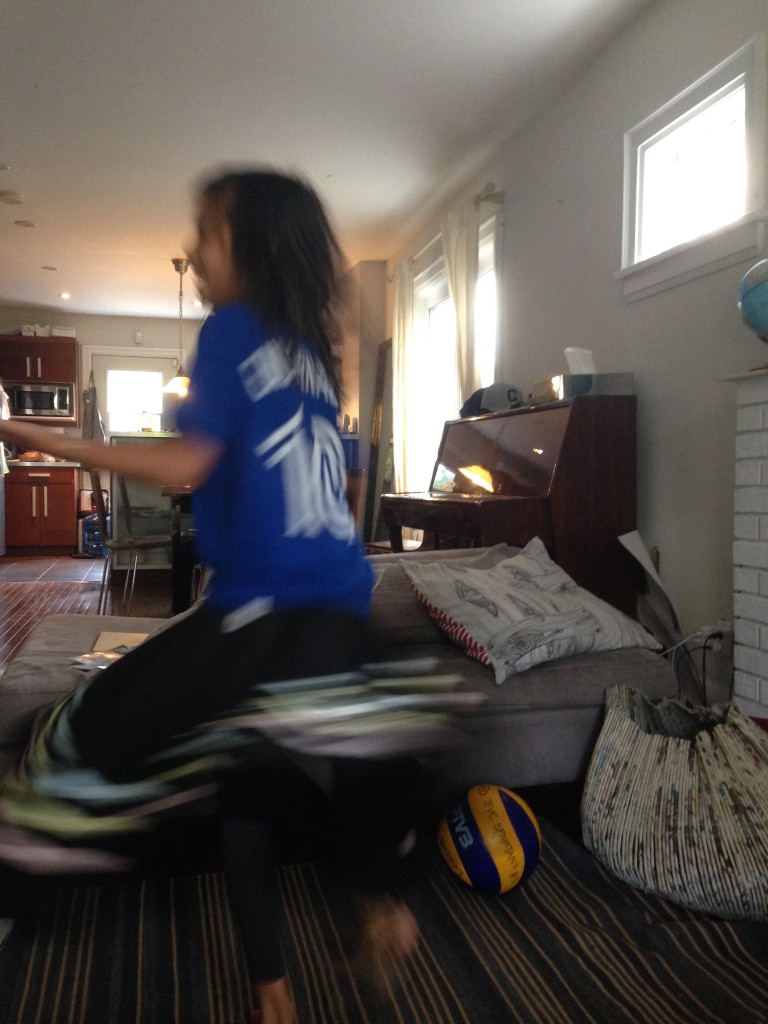 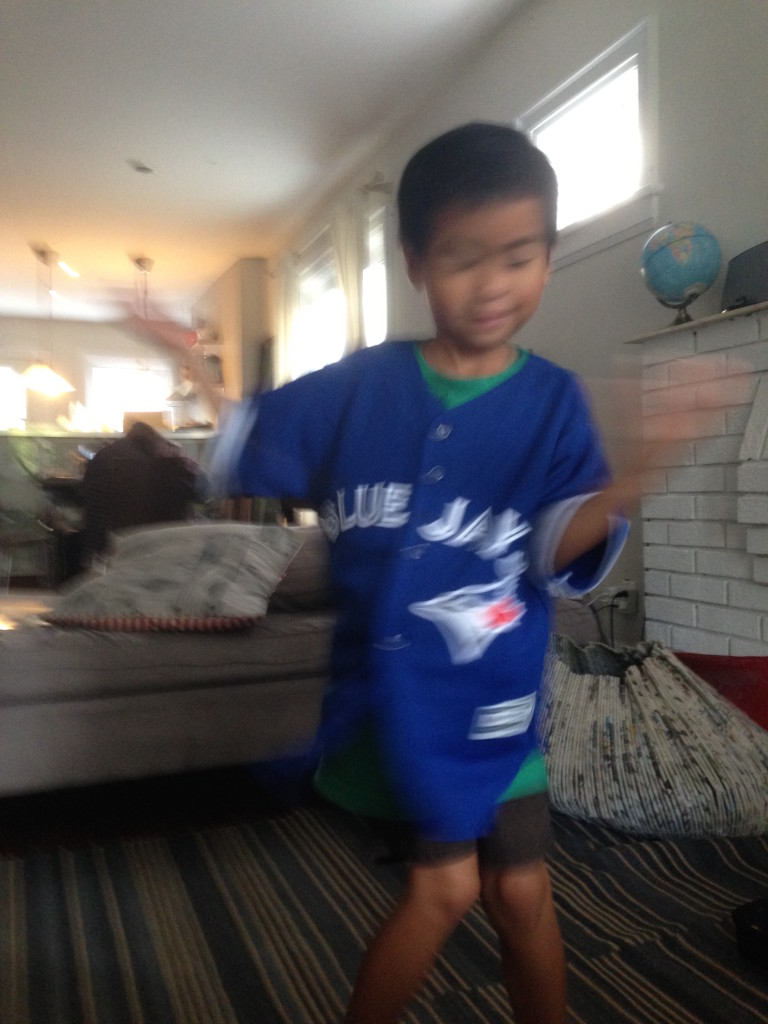 #1 is busy with her university course and The Big History Project. As we begin to enter the Middle East geographical region, she will study the modern history and look at how 3 major religions – Judaism, Islam, and Christianity –  intersect in that area.  She will be reading The Red Tent by Anita Diamant.

Next week, we will be moving further west to Ancient Mesopotamia/Babylon and begin talking about the Abrahamic religions.

Whenever we approach a subject, I am always leaning towards the light and pointing to that direction.  I am trying to present things that lift up their soul and for them to see the light within them.

I am grateful for our groove.

42 days of gratitude….giving thanks to it ALL.

I still have 4 spots for next Tuesday’s Book of Hours Workshop!  More details here.