Today I am grateful for a friend’s car breaking down on a hill in front of what seemed to be an Act of God type of display of nature and for being with a friend who accepted it with grace, ease, and most importantly, humour.

A friend picked my up this morning to go watch the sunrise.  We arrived to strong winds and a lake that contained a rage of a woman scorned.  We stayed in the car.  The beach that I normally sit on was gone, the tide coming all the way in.  Waves crashed against the walls creating sprays twenty feet high. We watched in awe.  When it was time to leave, her car wouldn’t start.  The battery was dead.

There were no other cars around.  My friend needed to get to a commitment.   She tried to text but her phone wasn’t working.  I had tried calling and texting my husband but he was not responding.  We looked at each other and laughed.  We sat in the car and continued to enjoy the sun rising and the epic show in front of us.

A beat-up Honda civic drove past and my friend tried to wave him down but he waved back casually as if we were greeting him “Good Morning.”  He stopped.  My friend ran to his car, trying not to get blown away by the gale force winds.  He reversed back.  As she hopped back in the car, she excitedly explained that this person was a mechanic and he had jumper cables.

After popping her trunk, we held on to the hood so it wouldn’t fly away, and braced ourselves as we were being pelted by ocean spray.  This kind stranger, Steve The Mechanic, took out his jumper cables and went into his driver’s side to pop his hood.  But alas, his hood was stuck.  Of course it was stuck.  We closed her hood and proceeded to hop up and down on his hood as he tried to pull the latch from inside.  At this point, we were in hysterics.

After a few minutes of trying to get his hood open, he texted his friend who is also a mechanic and who also happens to live around the corner to come help.  But fortunately, at that moment, a car drove down. Steve flagged down the car and explained our situation – he had the cables but we still needed a running car.  The stranger graciously agreed to pull in right beside my friend’s car.  Steve hooked up the cables and jumped the car.  We thanked him profusely.  Finally we were on our way with my friend only being a little late for her commitment.  We laughed all the way to my house.

What I found particularly beautiful about this sequence of events is that we surrendered to the moment and in doing so, we were ready and willing for miracles to happen.  We didn’t curse our luck or plead for divine intervention.  We simply accepted what was happening and tried to make the best of it.  It could have been worse.  We were stuck but on the top of a hill overlooking a lake in a state that I had never witnessed.  It resembled the ocean on steroids.  The sky was textured and the sunlight hitting the underside of the clouds lit up in an array of fuchsia, coral, and tangerine blended together like a Monet painting.  The wind, the water, and the sky completely humbled us.

I was in a great mood by the time I got home and packed up the kids in the car and went back to the place to share it with them. 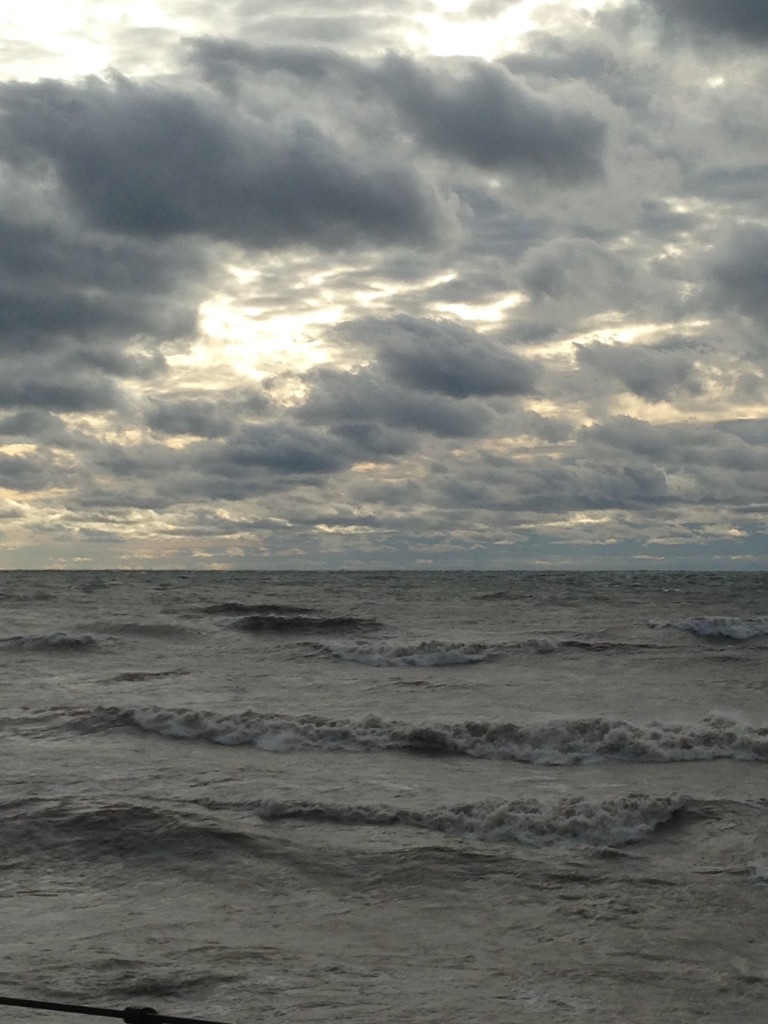 And here is a link to the video of the sounds and sights:

A big thanks to my friend Heather, Steve The Mechanic, and the unimpressed stranger and his car for a miraculous morning.