She loved it.  She couldn’t put the books down.  In fact, she used her Christmas gift certificates to buy the rest of the series.  I thought it would take her a couple of months to finish the series but she was done in January and we don’t start the block until March.

Though we discovered the graphic novel at the library and picked it up yesterday: 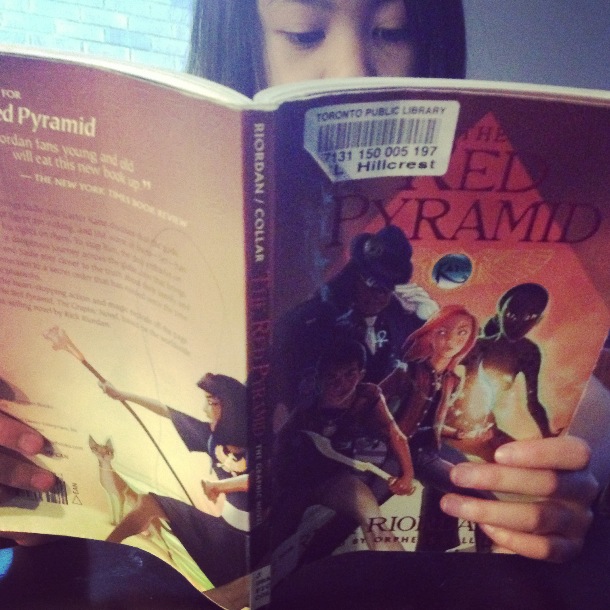 This actually worked to my advantage because she gave me clues as to what part of Ancient Egypt is fascinating to her.  I can plan more detailed lessons surrounding concepts that have already piqued her interest. Perfect.  For example, she’d drop tidbits of info in my lap like this:

#2 (out of the blue…I think I was in the bathroom):  “Mama, did you know that the Egyptians believed that a person is made up of 5 parts: ba, ka, ren, ib, sheut.  But a person’s sheut is really interesting.  It’s their shadow.”

Then she would just walk away.

Sheut, I didn’t get a chance to ask her why she found that part of the soul intriguing.  (I couldn’t resist. Sorry.)

According to Wikipedia, the sheut  is “a person’s shadow or silhouette, Sheut (šwt in Egyptian), is always present. Because of this, Egyptians surmised that a shadow contains something of the person it represents. Through this association, statues of people and deities were sometimes referred to as shadows.”

In The Serpent’s Shadow (The Kane Chronicles, Book Three)

, Rick Riordan explores the concept further saying that “the sheut is the mark someone leaves on the world. If someone has no shadow, they have no effect on the world, therefore they can not exist. It is also like a backup copy of the soul.”

Hmmm…my mind starts to race.  That could explain my aversion to February.  With the onset of the grey clouds and overcast skies, I have no shadow to cast.  I feel a little heavier because I am carrying the shadow within.  Too much of a stretch?  I don’t think so.  It makes sense to me.  My shadow is my backup copy.  Maybe I feel a little less grounded, a little more sombre, because I can’t physically see it right now.  That’s what February does…it steals my shadow.  Bingo.  Maybe the Egyptians were on to something.

Now I’m really into exploring the concept of shadow.

I found this interesting commentary on the symbolic significance of the shadow in Peter Pan where the author states that “the shadow’s most basic and obvious function is to contribute to the fantasy of the play.”  It’s a connection to childhood and imagination.  When Wendy sews his shadow back on, all is right with the world.  He feels complete again.

I always thought of “my shadow”, the symbolic one that lives inside, as something sinister, the dark part of me.   Something to hide.  The part of me I need to deny, to shun, to live without.  I needed to be a ray of pure light and not sink deep into the abyss of woe and chaos.  But if I embrace this part of me as an essential part and not something to shame, perhaps I can give myself a little break this February and retreat into it willingly and consciously.

And perhaps I won’t see or feel the shadow at all…and will that mean we won’t have 6 more weeks of winter?