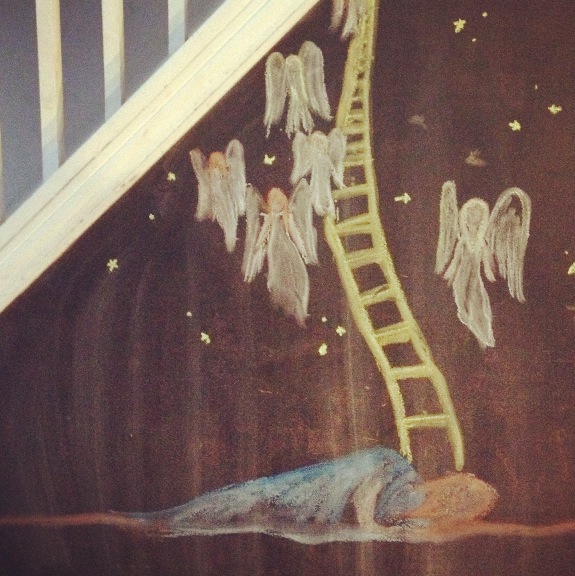 (This post is a day late because the prompt was tough.  I had to sleep on it.  So here it is after a little more thought.)

I just finished our second Old Testament block for Grade 3 with #3.  We used Jakob Streit’s Journey to the Promised Land.  I told her she would be hearing stories about a family’s journey.  A journey through generations.  We talked about the words ‘descendants’ and ‘ancestors.’  We made a family tree of Abraham’s family.    I asked her what she thought about Abraham and his family.  She said they were all special and always chose good.  Each descendant inherited Abraham’s belief in God and a pure heart.  It led to a discussion on what she inherited from her dad and I.

From mom: wavy hair – she’s the only one who has wave and curl to her hair.

From dad: appetite – she and her father are part of the “last ones at the table” club.

Aside from physical traits, I wondered, what else do I pass on to my children?  What are they inheriting?

I used to be conflicted about “inheriting traits.”  I was intent on forming an identity of my own, creating myself from scratch, and denying that I am destined to become someone because my genetics say so.  Why?  I didn’t like not having control.

But then in my early 20s, I had a moment that changed my thinking.  I was working at a company that my mom once worked at and now I worked alongside some of her previous co-workers.  One day I was sitting in my cubicle, drinking my morning coffee.  A woman, who had worked closely with my mom, stopped and said to me, “Oh my God.  You have your mother’s hands and that’s exactly how she used to drink her coffee.”

I looked down at my hands.  For the first time, I saw my mother’s hands.  They were her hands.  I saw my little fingers intertwined with those hands while sitting in church.  Those hands guided mine as I grasped a wooden spoon to mix the marble cake batter she always made.  Those hands are now holding this coffee cup in the same way  her hands held her coffee.

It wasn’t just her hands.  I was holding my coffee the same way.  I inherited a lot of her mannerisms unconsciously.  And not just my mother’s.  I noticed things I did just like my grandmother who I spent a lot of time with growing up.  I took all of it from them: the good and the bad.

And now I see it more and more.  But I don’t define myself based on what was passed down to me.  I may have inherited a physical replica of my mother’s hands but they are my hands.  I don’t have to use them in exactly the same way that she did.  I still have a choice.

With 5 children, I can’t help but see bits and pieces of myself, Ever-Patient, and our parents in each of the children.  They started to identify themselves and each other based on those traits: “Well, she’s the artsy one.”  “I’m sporty like Dad.” “I look like Mom so I’m just like her.”  We’ve had to remind them all that they are their own people.  They can all be artsy, sporty, like me, like Dad, and also just be themselves. Whoever that is.

One day in the summer we were at the park.  #2 was skateboarding and #3 was reading a book.  A stranger assumed the reader was the shy and quiet one and the skateboarder was the more active one of the pair.  I realized that I would have made the same assumption too had I not know them.  In reality, the opposite was true even though they were proving me wrong at this very moment.  I noticed that they inspired each other to try things outside of their comfort zone and found parts of themselves they didn’t know existed.  We preach that at home.  Just try.  If you don’t like it, that’s ok.  At least you tried.

In that moment, I realized the most important thing we pass down are not our genetic material but how we use what we have to live the life of our choosing.

Next post: a good day = connect the dots + a blank page.