when they can’t speak…

…they put their words on paper.

My friend, Brooke,  posted a great question on our Sense of Story Facebook page yesterday:  How do words affect the children in your life?

That’s when I thought about all the letters and notes from my children that are slipped under my door or left on my dresser. 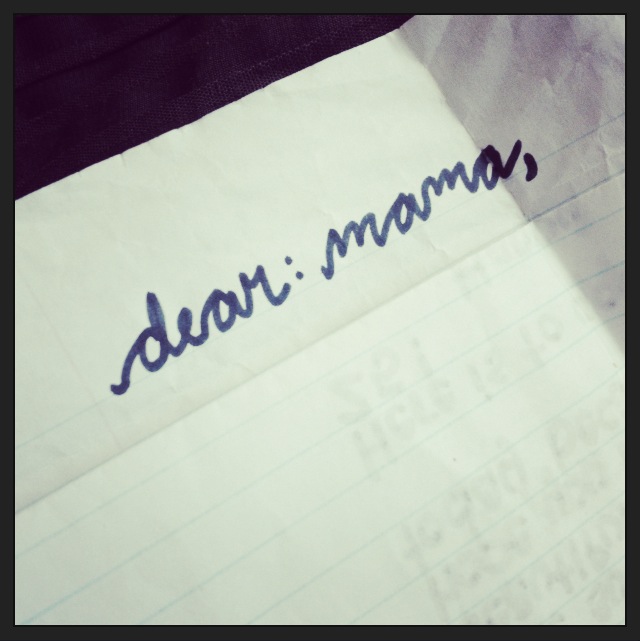 When #1 was born, I worked part-time and went to school part-time and then it morphed into me working FULL-time – 10 hour days to make ends meet.  By the time she was a year and a half, she was a before-care/daycare/after-care child.  Those days were hard for me.  She never complained about daycare and at Montessori, but on weekends, she became so attached to me.  I knew being away from me was affecting her too.

I read this book to her a lot: The Kissing Hand.  And I wrote her little love notes that I placed in her snack bag.  At first they were little pictures that would make her smile.  I would draw her on a swing set with me pushing her.  I would draw a heart and a rainbow.  When she was able to read the notes, I would write what I loved about her and us.  “I love your smile.”  “I love your kindness.”  “I love it when I read to you.”

I write to the kids a lot.  If Ever-Patient and I go on a trip without them, which is becoming a little more frequent now that they are older, I make them little notebooks with messages from us.  I jot down questions for them to answer about their days without us. I leave room for pictures for those who can’t read or who would rather express themselves through their drawings.  And when #1 first went away to camp, I wrote her a letter to be opened each night while she was gone.

So it never really surprises me when I find a letter from #1, like the one shown above, that she had written to me a few years ago.  All my words that I have given to them on paper have inspired them to write out their own words.  Just another example of the kids learning through imitation.  I never really sat down and said to them, “Write it down when you can’t say it out loud.” But they do.  I’ve never said,  “It’s so wonderful to receive a written note.”  But they write them anyway.

I found this note on my dresser when I came home from the hospital last year: 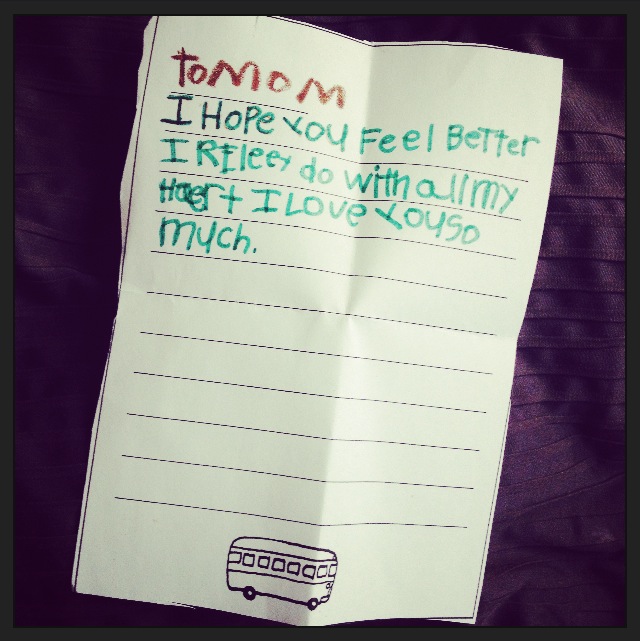 Sometimes they write (or draw) asking for something they need.  I found about 10 pictures, that looked just like this one below, all over my bed this week…and this isn’t the first time she’s done this either: 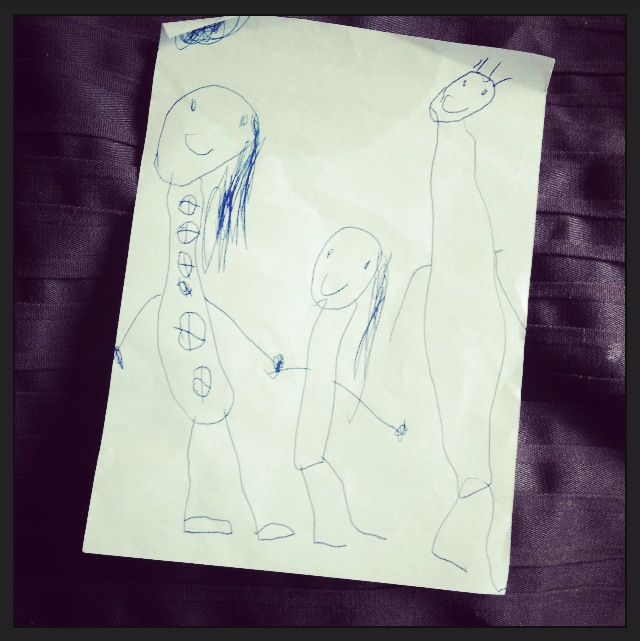 Me: Who left these?

Me: Who is that in the picture?

#4 shrugs shoulders and walks away.

I wonder where she gets that from.

They are communicating on paper more and more:

Sometimes words on paper explain things that words spoken out loud can’t, especially when it comes to emotional topics.  The pen to paper makes you edit yourself because you have to take a second to think about what you are trying to say.  Is that the word I want to use?  Do I really mean that? How can I explain that better?  This has been my go-to with my teen.  My words tend to come out all wrong with her.  There’s always a ‘tone.’  For some reason, I sound harsh and critical when my intentions are far from that.  I default to the letter-writing.

The universe, God, the fates, destiny – they all work in mysterious ways.  Just when I couldn’t find the words to say to my oldest child, even on paper, she found my journal full of letters that I wrote to her when she was in utero.  I had forgotten about them and she had found them packed up in a box with other books we haven’t opened since our last move.  I would have been mortified if she found them a few years ago because she wouldn’t have been old enough to process my experiences that I had described in those letters and why I wrote what I did.  She found them at the right time.  Almost sixteen, she was already asking questions about what it was like for me to have her so young.  It’s a difficult subject to discuss – I walk on eggshells when I speak to her about it.  Finding those letters, those letters that are addressed to her, answered the most important question she had for me, that she’d always had deep down, in a way that was undeniable because they were written in the moment, and not in hindsight:

Did you love me from the very beginning?

Each and every letter screamed: Yes!

She was always meant to have those letters.  Those belong to her. There is nothing that I could have told her now that she wouldn’t have doubted.  But there was absolutely no doubt in those letters.  I wrote those letters for me, to give me strength, to give me comfort.  I had no idea how much they would impact her in those same ways.  There is a trust in me that she has now.  A trust that I wasn’t “b.s.”-ing her all this time when I said I’ve always loved her.  She knows, thanks to a voice from the past that she has never heard before.

I will continue to write to my children because I want them to continue to write it all down and find ways to express themselves when they can’t find the courage to say it out loud, and because one day, they will want to know – and maybe need to know – just how much I loved them all.

Think about it…How do words affect the children in your life?